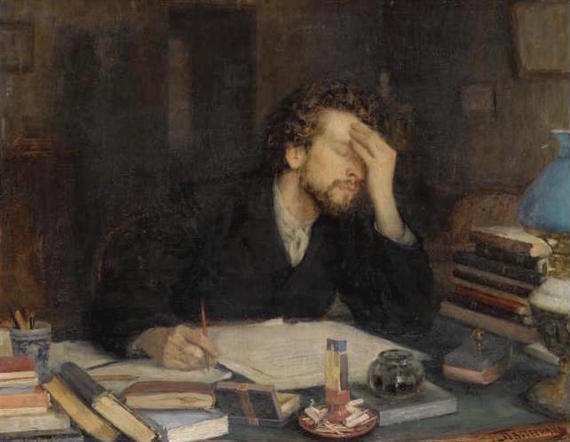 "I hate writing, I love having written." Dorothy Parker

In a recent New Yorker article, writer Maria Konnikova explored some of the possible causes behind writer's block. A 1940s study found four different types of blocked writers: those who were anxious, those who took their anger out on others, those who were apathetic, and those who were hostile and disappointed.

While each type expressed their stress in different ways, that stress seemed to have a common root: a fear of judgement. The first group was highly self-critical; the second was concerned about being compared to others; the third felt "constricted" by rules and therefore, presumably, afraid to break those rules for fear of being judged; and the fourth depended too much on external motivation -- in other words, positive judgement by others.

So how do you move past this fear of judgement and get unblocked?

Konnikova says that "learning to do creative work of any kind...may help combat writer's block," and that "when one feels writer's block, it's good to just keep putting things down on paper."

Novelist Graham Greene kept a dream journal, which he began as an unhappy teenager and proved to be "his savior" when he encountered writer's block in his 50s. Through dream journaling, Graham felt "catapulted into a different world" and away from his anxiety.

Greene found solace in his dream journal because he knew it wasn't something that would be read. Konnikova says that such an escape can "give writers' minds the freedom to imagine, even if the things they imagine seem ludicrous, unimportant, and unrelated to any writing project."

The researchers involved in the writer's block study became convinced that "allowing for error" was integral to overcoming writing block. How can you do this? Have your protagonist do something completely out of character. Have aliens land in your Victorian novel. Write a trashy romance scene. Write anything you think you shouldn't.

First chapters, first paragraphs, introductions. Whatever you call them, writing the beginning of anything can be the most difficult part of the piece.

So skip it. Instead start with whatever is most compelling to you. Flannery O'Connor has said that she has to write to "discover what [she's] doing." If we don't even know what we're doing, how do we know how to begin? Sometimes we don't know until the end.

4. Stop in the middle

You'd think the end of a scene or idea would be a logical place to stop writing. However, it will also make starting again the next day feel like starting from scratch.

Be like Ernest Hemingway and "write until you come to a place where you still have your juice and know what will happen next." If you stop in the middle, the next day you'll know what's coming, and you'll have the momentum to move on.

This helpful piece from Lifehack suggests "telling yourself that you only have to write for five minutes," and that chances are you'll write for longer.

Lifehack also suggests that "instead of giving yourself an entire day to write an article or report, restrict yourself to just two or three hours," and that having a whole day "will only succeed in giving you an excuse to slack off."

"I write only about two hours every day," said Flannery O'Connor, "because that's all the energy I have, but I don't let anything interfere with those two hours." (I'm guessing that includes Facebook.)

Gabriel Garcia Marquez has said that when he started writing full-time at 40, he wrote from "nine o'clock in the morning until two in the afternoon." Feeling guilty about only working part of the day, he tried to work in the afternoons, only to find that what he wrote then "had to be done over again the next morning."

Which brings up the next point. What might be causing your block is something that's not working and has to be cut. Ever get gum stuck in your hair? Sometimes it's easier just to snip.

Writer Manuel Gonzales says that when he gets stuck, he "jumps mediums," switching from a computer to a notebook to a manual typewriter. Try switching between Word, Google Docs, and a blogging platform like WordPress. Read your work aloud. Seeing -- and hearing -- your piece in a new format might help you see new things.

If you're having trouble, don't force it, suggests poet Ocean Vuong, who walks away from his desk when he's stuck, "sometimes not returning for weeks at a time." Or you might run, like writer Idra Novey, who runs out the door, literally, when she runs out of words.

You could also take a walk in the park. Studies have shown that walking through nature lowers stress and increases feelings of happiness. Even just looking at nature can make your brain work better as does looking at art.

10. Write the way that's best for you

Finally, don't let anyone tell you how you "should" write. Some writers insist writing first drafts in longhand is the best way while others prefer typing, while still others like a combo of the two.

Write in the morning if you're an early bird or at night if you're a night owl. Write six days a week, 1,000 words a day, like Stephen King, or two hours a day like Flannery O'Connor. Write walking on a treadmill or standing or lying in bed. There are no rules except the ones that will keep you writing.

How do you get past writer's block?