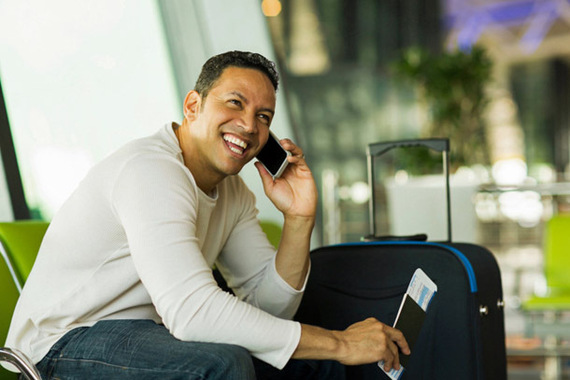 If you've traveled by airplane before, you've probably encountered at least a few of these annoying passengers. (Either that or you're one of them!) Did your pet peeve personality make our list? Do any of these personality traits sound a little too familiar? Read on to find out!

Your flight's not boarding for another hour, but this person (and likely his oversized carry-on that has to make it on the plane) is already hanging out as close to the gate as the agent will allow. It doesn't matter that he's in boarding group five—he will refuse to move, blocking everyone else's way when boarding begins.

There's one outlet for 100 people at the gate, but this person has commandeered both plugs for her laptop and cell phone—and when one is fully charged, she's swapping it out for the iPad/Kindle/Game Boy. Someone get this flyer a power strip.

Has this kid just been abandoned to live life alone in the airport? Who knows, the parents are nowhere nearby to ask. Often found racing around, crashing into everything and treating the boarding area as a personal lap track, this child usually has no one nearby to provide discipline. Our guess? The parents have gone to the nearby Starbucks for some peace and quiet.

Wonder what this person's entire life story is? Don't worry, you'll find out soon enough, as he conducts an endless phone call at maximum volume with no regard (or shame) for the captive audience around him. Whether he's discussing a crisis in his marriage, medical-test results, or a confidential work issue, rest assured that you'll get to hear every minute detail of the one-sided conversation. Trick: If he happens to give out his phone number at any point during the monologue, write it down and send him a text to shut the heck up.

Look, we're super glad that you just downloaded the most addictive game and are really crushing it, but can you please put it on silent or at least plug in earphones? No one else is getting as much enjoyment from your game's bleeps and bloops as you are. The worst offenders are the parents who hand over their phones to keep the kids quiet … but defeat the purpose by not turning off the sound.

Looks (and smells) like someone got over-served at the airport bar … and is she cracking into her duty-free liquor now? Don't worry about having to sit next to this person on your flight—odds are, she's going to get dragged away by airport security long before you board.

"Don't you know who I am? I am a double Platinum Elite status club member!" It doesn't matter who the rage is directed at—it's going to be full of self-entitlement and empty threats. We pity the gate agent who has to tell this beastly individual that no, the plane wasn't held for hours just to wait for you.

The gate is packed, and people are standing while waiting for their flight. Not the seat sprawler, though—he's got a seat for himself, another for his carry-on bag, and a third one for his travel pillow and bag of fast food.

You'll be able to identify this person from a good distance away, as that's how far her loud sighs will carry. How dare those other flyers take more than two seconds to remove their shoes! Don't they know I have a flight to catch?

Look, we know you can't cancel your flight just because you have a cold. That doesn't mean we want to be anywhere near you, though, person who's sneezing without covering his mouth, coughing into the faces of everyone around him, and touching every surface in sight with his germy hands. We'll remember you when we get sick a few days into our trip.

You Might Also Like:
10 Signs You're the Worst Person on Your Flight
Five Types of People to Avoid on Planes
10 Most Annoying People You Meet in Hotels

Read the original story: 10 Worst People You Meet in Airports by Caroline Morse, who is a regular contributor to SmarterTravel.