The following was originally posted in Kevin's blog at MyMediaDiary.com. 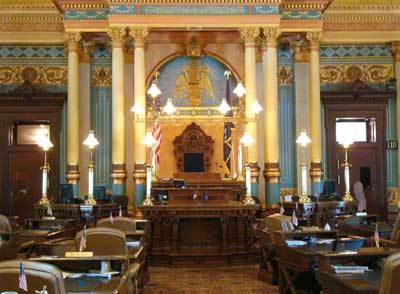 Do you hate those knocks on the door with people holding clipboards? Have you thought of running for office but don't want to be the next Avon lady?

Well, you can skip those pesky 500 petitions needed to run for state office in Michigan. The state's website recommends getting 1,000 signatures--just to be on the safe side in case you've got some bogus citizens or someone's going to challenge you on using a #3 pencil or a hanging chad.

That's right! For the low, low price of only $100 and a notarized form by 4 p.m. Tuesday, April 22nd, you too can be on the primary ballot for the Michigan State Senate. 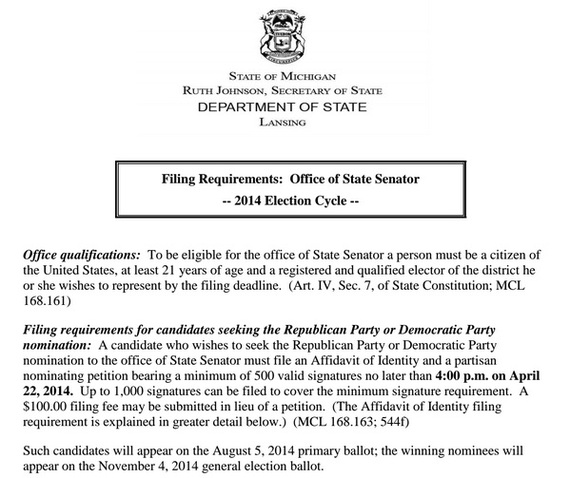 Did you see the best part?

If that doesn't appeal to the laziest in all of us, I don't know what would. That's less than one month's basic cable--and you're eligible for some pretty good pay and terrific benefits. You just have to buy a few more suits and listen to folks argue with one another while euthanizing the hostile relationship on the other side of the aisle with phrases such as "my respected colleague."

So, what are your chances? Do you have a shot to win your local seat?

The safest best is to find out if there isn't an incumbent.

There are currently 26 Republicans and 12 Democrats in the Michigan state senate--one of the few full-time state legislative bodies in the country. (Wyoming, for example, just pays its congressfolk $150 per day.) Some of these 38 cannot run again since the 1992 term-limit law was passed. I remember a social studies teacher telling me, "We've always had term-limits. They're called elections."

And over twenty years after the law was passed, according to Mike Turner of Crain's Detroit Business (source):

...research conducted by Wayne State University political science professors, concludes that term limits have led to less experienced legislators and may have increased the influence of lobbyists and legislative staffers, who have more knowledge and greater institutional memory about issues.

But try to find out who's running and who can't. I challenge anyone with a Google screen and fingers on their hands to try to find a quick list of vacated seats. Oh sure, you can try the Senate website, but discovering a convenient list from that select group letting know you when their own jobs end is like asking a football coach which of his star quarterback's knees is sore. 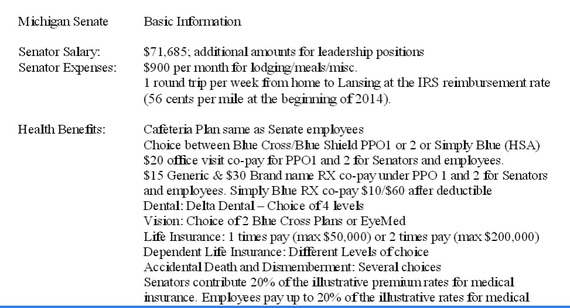 Well, not exactly what we were looking for, but certainly some pretty good benefits.

Ah well, there's always Wikepedia (link) that at least lets you know if your senator can run in 2014: 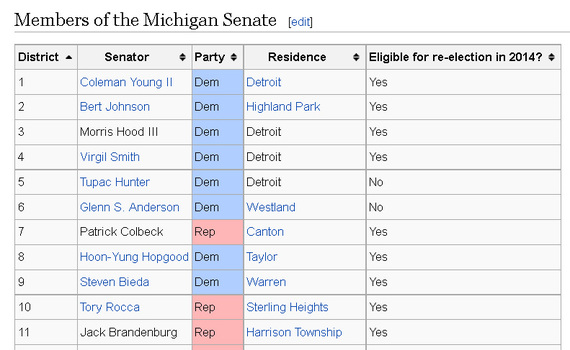 Note, it doesn't tell you if the "No" means their election cycle isn't up or if they're term-limited out of Dodge, but at least you can click on someone's name, find out when they were elected and do a little math. We'll take a look at my senator in the 13th district...

Okay, so he was elected in 2006. Eight years ago, that's two terms. (Carry the three...). Yep, he's term-limited out. His seat's open. Now who's running for his vacated seat? 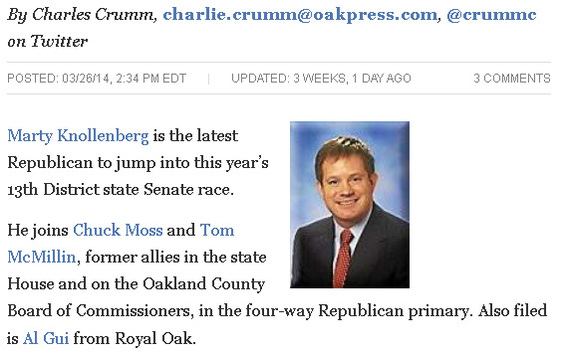 According to the Daily Tribune (link), there are four Republicans and no Democrats.

Got a birthday coming up for a friend? Why not put them on the ballot this summer in a primary? Won't they be flattered? Spend a hundred bucks. Talk them into running. They don't even have to spend any money on advertising! It would be fun just to throw the election results in the old scrapbook--even if there are only three votes.

Or perhaps, that same friend would be an excellent candidate, appeal to both "sides of the aisle" and actually change Lansing? There are plenty of "small town" districts in Michigan where the party doesn't matter as much as the family name for three or four generations--people everybody knows since they were kids--and actually trust.

That would be okay, too! You need a $100 to your county clerk and a notarized form (link) by 4 p.m. Tuesday. It's just that simple, unless of course you live in one of the multi-county districts, then you've got to drive a little longer to Lansing or send your documents overnight.

Oh well, I guess everything can't be crystal clear.