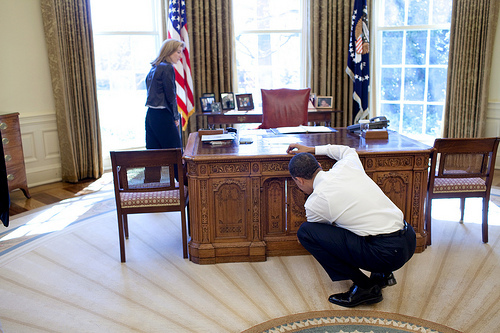 This is going to be gratifying for Democrats, while only adding to Republican depression. The one real issue in question being Obama's resolve and his willingness to confront. One review says the window is the auto crisis. I think it's another, one that doesn't lead to something so sure.

Among what Obama has done is an Af-Pak strategy; strong Administration push on an early Middle East presence; engaging with leaders Bush wouldn't (Chavez, etc.); while promising more with Ahmadinejad, which is where we'll pause for just a moment.

The Iranian president has an election coming up on June 12th, so he's campaigning. So you need a slogan, right? He's evidently found one:

Obama's signature campaign slogan, Yes We Can, has been replicated by the Iranian president in a promotional video issued for Iran's presidential poll on 12 June, when Ahmadinejad is seeking re-election. The video features a cover picture of Ahmadinejad wearing his trademark white jacket and pointing to the Farsi phrase Ma Mitavanim (We Can) on a blackboard. The film is aimed at students and capitalises on his former status as a university lecturer.

It leaves you speechless.

Obama has also gotten his stimulus passed, expanded SCHIP, reversed the Gag Rule, stem cells, budget done, ethics, Lily Ledbetter, announced yesterday that officials will once again have to consult agencies on rulings that might impact endangered species, among other things, and planted a White House garden to boot.

But if you look back on other presidents, the first 100 days doesn't tell you how it will all end. So while the review is obligatory, it's going to tell us nothing, unless you use a different criteria than the usual laundry list, which everyone is trying to do. Find a new way to judge the first 100 days. For instance, danger signs.

WJC got to work on the deficit, aid to Russia, and more, but who could know that in 1994 a simple move to reactivate the special counsel statute would change the first paragraph of his presidential biography forever? You decide if there was a hint it would in the first 100 days.

In George W. Bush's presidency, something happened at the beginning of his administration that would actually reveal a lot, as far as I'm concerned. Bush demoted the terrorism czar position from cabinet level to staff position, ignoring Bill Clinton's warnings about al Qaeda. Now this wasn't an item on Bush's 100 day list, but looking back it's one of the most consequential. However, nothing in the first 100 days prepared us for the type of president Bush would be after 9/11, except if you weigh Richard Clarke not being able to get anyone's attention on the threat until it was too late.

In life, it's often your strengths that can be your blindside, because that's where the ego resides, especially for politicians. Not that doing what's right isn't laudable, but Obama's core message, his theme, has always been bringing people together, not confronting them. Once again I go back to that interview with George Stephanopoulos: "I think that I have the capacity to get people to recognize themselves in each other. I think that I have the ability to make people get beyond some of the divisions that plague our society and to focus on common sense and reason and that's been in short supply over the last several years. ...that you make progress by sitting down listening to people, recognizing everybody's concerns, seeing other people's points of views and then making decisions." - Barack Obama (on ABC's "This Week" - May 2005)

The release of the OLC memos has changed this dynamic. It's unleashed a fury on the right, leaving Obama in a seemingly confrontational position, which is not his natural comfort zone, as has been witnessed by his "no one will be prosecuted" stance that shifted to Justice, while letting it be known that he doesn't want an accountability or truth commission on torture. He's besieged on the right, but also on the left, for diametrically opposed reasons. He's gotten himself caught between his promise for transparency and his penchant for bringing people together in consensus.

Looking back, Bush releasing the terror czar, even after warnings about Al Qaeda, is a hint to his asleep at the wheel reality we faced after "Bin Laden determined to attack inside US." But it didn't tell us we'd walk down the torture lane.

So, after all the publicity and stories about Obama's first 100 days, most of them laudable, and after looking at other presidents, I've come to the conclusion that what we should look at is the signal that something might lead us down a path that would change the presidency of Barack Obama. That one moment is the release of the OLC memos, which has twisted the Obama administration into knots. It has exposed Obama's discomfort with confrontation, something that at his core Mr. Obama is not exactly good at navigating.

But it is this confrontational nature that Pres. Obama will need going forward as he addresses the most important foreign policy area, the Middle East. It's his stretch moment, to which if he cannot rise he could see a myriad of other issues unable to solve. Because if he doesn't stand firmly and decidedly in front of PM Netanyahu on the two-state solution, getting something concrete implemented, the Saudis and other important Arab allies, as well as the EU, are less likely to listen to him as readily on Central Asia. Then the next sound you'll hear is kaboom, with Obama's presidency changed forever, because bringing people together on the issues he faces today takes skillful confrontation, the bookend of successful leadership.

So the first 100 days tells us something, but only if you look at it through the lens of what the 100 days exposes might be President Obama's Achilles heel and the early signs of how well he navigates this personal challenge to his presidency. We all know he can bring people together, but can he confront on issues and push forward implementing what's needed? His behavior after the OLC memos were released is the window. You decide what you see.