The aspiration of the Paris Agreement to limit global temperature rise to 1.5 degrees may one day be recognized as one of the most important goals ever agreed by international diplomacy. We now have the political consensus and momentum to prevent catastrophic climate change --but we must move extremely fast in order to make the aims of the Agreement achievable.

Global emissions must peak by 2020 and yet the Agreement does not kick in until that year.

This means the next four years are critical, and cities have a major role to play: cities consume more than two-thirds of global energy and are on track to become home to more than two-thirds of the global population; at the same time, 70 percent of C40 cities are already experiencing the impacts of climate change. The agenda for a 1.5 degrees world must therefore account for rapid urbanization in the context of increasing climate hazards, whilst sharply reducing the amount of energy cities consume and the carbon intensity of their energy supply.

The good news is that global mayors within the C40 network and beyond are already providing the leadership, commitment and concrete solutions to make the difference. Just as non-state actors played a major role in making possible an inter-governmental agreement in Paris, we now know that mayors will need to lead the drive to peak global emissions by 2020.

Here are five ways how:

At COP21, cities, and especially C40 cities, were hailed by national leaders and global media as the leading thinkers and doers. More than 440 mayors took part in the Climate Summit for Local Leaders hosted by Mayor of Paris, Anne Hidalgo and the U.N. Secretary General's Special Envoy for Cities and Climate Change Michael R. Bloomberg 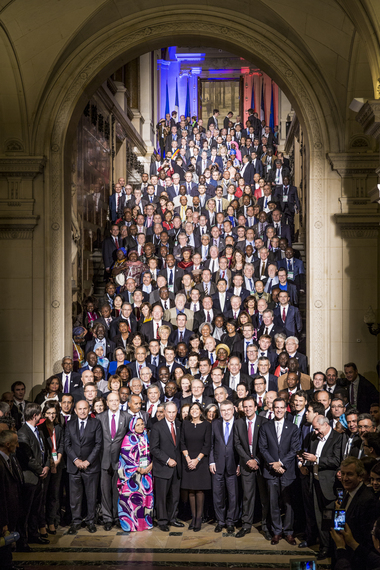 This recognition was based not only on the vision of leading mayors who advocated for climate action - and collaborated to deliver results - long before nations engaged seriously on the issue, but also on the collective ambition cities are demonstrating through initiatives such as the Compact of Mayors. The Compact of Mayors is the world's largest coalition of city leaders addressing climate change by pledging to reduce their greenhouse gas emissions, tracking their progress and preparing for the impacts of climate change. C40 cities have delivered more than 10,000 climate actions since 2009, and plan to expand 75% of those currently underway. Already more than 30 C40 cities have peaked their emissions and are now reducing their carbon footprint. A number of cities in the Global South have also set target dates for peak emissions, particularly in China.

The decisions made by mayors in office right now matter greatly: C40's research indicates that one third of the global safe carbon budget - the total amount of greenhouse gas emissions we can risk putting into the atmosphere - will be determined by urban policy decisions made between now and 2020. From Rio to Paris, to Los Angeles and Shenzhen, today's leading cities are setting the bar for other cities, and countries, in the crucial years ahead.

By sharing knowledge and accelerating the spread of good ideas, cities are already making an impact, but there is vast potential to do more. With increased resources and financing, along with more support from national political leaders, the progress made by cities could increase threefold. Research published during COP21 by C40 and Arup identifies the 27,000 specific activities, programmes, procurements, and policies that mayors and civic leaders have the power to deliver before 2020. Of these, C40 has identified 2,300 high-impact, readily deliverable actions that could save 450 MtCO2 by 2020, equivalent to the annual emissions of the United Kingdom - the world's fifth biggest economy. Together with what has already been achieved, this would mean C40 cities delivering over 1GT of GHG reductions by 2020.

While we must move away from fossil fuels in our energy supply, reducing energy demand in cities will be fundamental in achieving the 1.5 degrees target. Global average energy demand over the twenty-first century will likely need to be constrained to as little as 15% above 2010 levels.

More than two-thirds of global energy supply is consumed in cities, primarily by the buildings, transport, and industrial sectors, and mayors often control significant powers affecting the first two of these sectors. We must support low carbon development of these sectors in the rapidly urbanizing countries of China, India and Brazil. Decisions about urban infrastructure, systems and land use planning by these countries during the next one to five years will have an enormous impact on whether we "lock in" or avoid significant carbon emissions.

The cities of the future, wherever they are in the world, need to be compact, dense, connected by mass transit, with cycling and walking infrastructure, and with highly co-ordinated services.

The lack of access to finance is one of the biggest barriers to cities delivering climate action. The UN Green Climate Fund directed at low carbon, resilient development got a boost at COP21, with advanced economies formally agreeing to jointly mobilize USD 100 billion per year by 2020 to address the pressing mitigation and adaptation needs of developing countries. The city of Paris also announced a contribution to the Green Climate Fund, another example of cities taking leadership on the global stage. Projects applying to the Green Climate Fund, however, are determined by national governments, which may not have cities at the top of their agenda, and there is currently no mandate to prioritize urban climate investment.

C40 is doing its part to support our global south cities to mobilize financing. The creation of the C40 Cities Finance Facility (CFF) in partnership with Germany and Inter-American Development Bank (IADB), launched at COP21, will provide the skills, technical assistance and connections to funding opportunities needed to unlock up to1 billion worth of sustainable infrastructure in cities across low and middle-income countries by 2020. As well as connecting sustainable and resilient city infrastructure projects to financing, the CFF will help cities build capacity and skills in project finance and share learning across the world through C40's city networks and beyond.

Engaging private finance to mobilize climate action in cities - including improving mass transit systems and promoting renewable energy - is one of the most effective ways to foster economic growth. Low-carbon urban actions available today could generate a stream of savings in the period to 2050 with a current value of US16.6 trillion, and could reduce annual GHG emissions by 3.7 Gt CO2e in 2030.

Delivering on the Paris Agreement objectives requires fundamental and systemic changes, which won't come about - and certainly not swiftly enough - unless there is a groundswell of political support demanding action.

While there are strong indications that urban citizens want a climate-safe future, many mayors still face an uphill battle winning political and popular support for ambitious climate action. Mayors and their citizens need to build a shared vision for their cities that supports the agenda necessary to meet the 1.5 degrees target. This is best achieved by forging an understanding that local climate action increases the health, wellbeing and economic opportunities of urban citizens. It's about having clean air to breathe; more green space, bike lanes and pedestrian zones; greater resilience to withstand extreme weather events; and energy efficiencies that bring cost savings that can be channeled to meet other societal needs.

The arguments for climate action have only gotten stronger. A recent C40 report assessing a range of climate actions in cities across the world identified compelling economic, social and environmental benefits (watch this space!). The Global Commission on the Economy and Climate unequivocally showed that moving on to a low-carbon development, climate resilient pathway will deliver faster rises in living standards and more sustainable long-term economic growth than the high-carbon alternative. This is a future can all aspire to and C40 cities are leading the way.