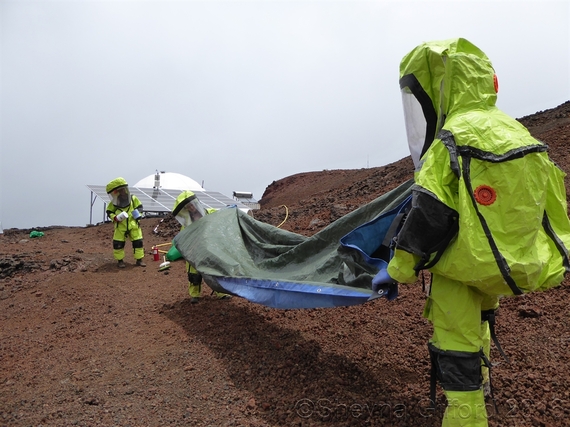 The crew working together on EVA 100.

It's one hundred and seven days to mission's end. Sometimes, it seems like we're a few days from home instead of 15 weeks. Most days, it feels like we just marked the first 100 days on sMars. I can see us all sitting around the couch downstairs wearing scarves, balancing our musical instruments while arranging radios and rock samples to spell out "100". Then, just like that, it's day 258 and we're coming up on the 4th quarter. The better part of a year - of our life on simulated Mars - dissolved into mix of everything we've done to keep this dome-shaped ship afloat.

Our mission began on August 28th. By November's end, we had pretty much discovered, unearthed, and dusted off everything we couldn't live without, and as well as quite a few things we could. We found all of the science supplies; the secret filters that wanted regular changing; and the surprise foodstuffs left for us by previous crews. I remember thinking, "Wow - that is a LOT of lentils." By then, our first crops were starting to come in. Our aquaponics systems were nearly online. We had successful cheese, yogurt, and bread cultures, which struggled, as we did, to stay warm through the darkening days. Three solid months of dome life had given us the data we needed to make less and less daylight stretch further and further. We knew when the desk lights had to go off; when the heater could go on; how much cooking we could get done and when, assuming that the Sun came out that day. 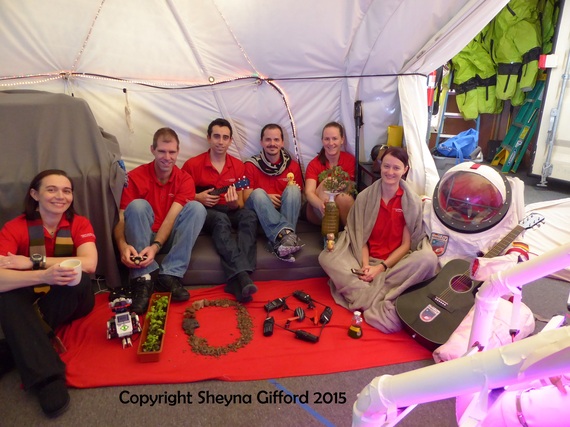 Back in those days - which feel at once like yesterday and five years ago - if the Sun didn't come out, a hot meal was by no means a guarantee. Even if it did, what we had to make a meal of was a bit dicey. As Thanksgiving came and went, we were running short of just about everything. Milks and flour were being carefully rationed. Bread was a rare treat. Egg powder was a distant and pleasant memory. Vegetables, apart from those grown here in the habitat under the artificial light, were limited to three: dried spinach, dried kale, and, of course, powdered potatoes. But Christmas, with its shiny promises, was just around the corner. Let me tell you, wrapped gifts laid out under a tree are nothing compared to the first robotic food delivery in many moons (having 2 moons does not, sadly, double the rate of supply runs). Soon, there would be butter! Corn and peas! Mozzarella and Parmesan cheese. Lots and lots of things that help freeze-dried spinach and kale taste like anything BUT what they actually are.

Quick aside: Sometimes, as I'm falling asleep at night, I imagine standing in a store where aisle after aisle of food is stacked from floor to well above eye level. I know that such places exist - I've been in them countless times - but all the same, it sounds utterly preposterous. Like being told that a vast reserve of pure gold bullion is available for perusal at my personal convenience. Of course, gold bullion serves no purpose on Mars. Fantastic quantities of produce, on the other hand... 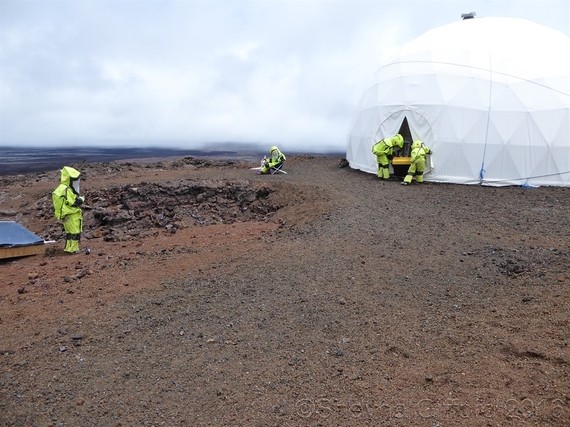 Crew working together outside the dome.

...This particular daydream is soon to become a hard and fast reality. T-100 days means that we're about to enter a new phase: the part of the mission when we start to wrap things up and prepare to rejoin the rest of humanity. If this were a full-scale Mars mission, our ship would be on a fast-moving Earthbound trajectory. We, the crew, would be saying anti-solar-particle-event prayers at "night" and spending an ever-increasing number of hours during the "day" exercising in the hopes of being able to walk when we got home.* Not right away, maybe, but hopefully within a few weeks of returning. As of this moment, we're not sure if that's a fair thing to ask of the human body after spending 2.5 years en route to, on, and returning from Mars. We may never know until we really go. True to our somewhat binary natures, humans have only ever subsisted under the influence of two modes of gravity: ON and OFF. ON is when we load minerals onto our bones just by walking down the street to get a cup of coffee. ON is where we must explode hundreds of gallons of fuel to get off the ground quickly; and why we participate in sports that make us feel, for a moment, like there is no such thing as gravity. OFF is where your sensory, nervous, and circulatory systems simultaneously unhinge. Balance uprooted, your body bends and flows in every direction and none in particular. Faces swell. Legs shrink. Bones shrug off their cool calcium coatings. Like discarded sweat socks, these coatings ball into brittle stones in the kidneys. The heart, accustomed to reclining on the firm pillow of the diaphragm, balloons and floats about a bit in the chest. The muscles it feeds sulk and waste away.

If you work out hard enough for long enough every day in space, some of that can be reversed, or possibly even prevented. Then, you get to Mars and...something happens. What, exactly, is unknown. Unlike anywhere we've ever been before (for long), Mars has some significant gravitational force with which we will contend: 1/3 of full ON gravity. One-third is distinctly BETWEEN ON and OFF. Is BETWEEN enough to keep the minerals belted to our bones, to keep our muscles from melting? Maybe. Currently, the bill for creating artificial gravity for anything much larger than a fruit fly comes in at around 40 billion dollars. As a result, we have yet to discover if 1/3 g provides sufficient pull to sweet-talk our bodies back into overall equilibrium, hearts, kidneys, eyeballs and all. Until we engineer some sort of large-scale in-BETWEEN or get ourselves to Mars, the best we can do is work out like crazy while we're OFF in the hope that it will holds us together when we're suddenly ON again. 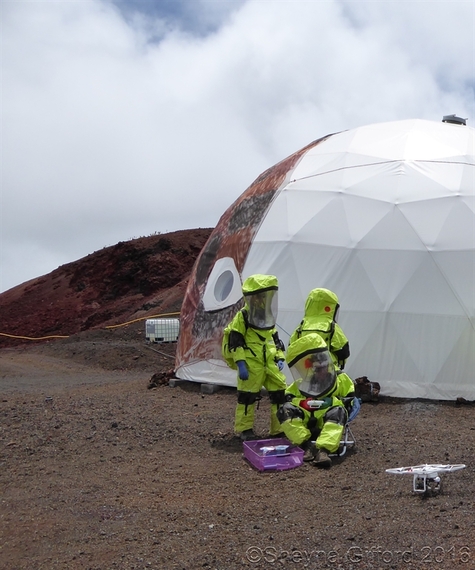 Since we sMartians have been ON full gravity this whole time, the question won't be, "Can we walk?" so much as, "Can we walk safely across the street?" Like grocery stores, vehicles of any kind are not a factor of life on sMars. Walking around, we aren't wary of big rigs and bicycles, but torn-up shoe soles, collapsing lava tubes, and busted air fans. Transportation beyond the foot-powered variety is quite simply a non-issue. The same goes for many aspects of modern society, including anything you're likely to hear about on the news - war, terrorism, politics - and commerce of any kind. None of that pertains to us here. Our cares, like our daily lives, are largely elemental. We worry about the Sun coming out, the wind blowing on our habitat walls, and the water in the tank. Our respective healths are important, naturally, as is continual communication with Earth. Apart from that...well, let's just say the corollary of isolation from the world's bounty is insulation from its pitfalls and predations.

As the return to Earth-life approaches, concerns about life-after-Mars have started to creep in. The pendulum of preoccupation is swinging back towards the things we'll need to survive in 3.5 months: little things like jobs, benefits, and functional methods of transport. Each of us here holds a stack of responsibility IOUs - to friends, family, professional life, and/or academic degrees. In my case, all four. Then, there's the cats. Somehow, I don't think my explanation about serving the greater good is going to fly with the fuzzy quadrupeds. Treats will have to suffice. Lots of treats.

In spite of the daunting commute, the Earth-based job search has begun in earnest. About the rest, there is little I or anyone up here can do to prepare for our return. We've tried reading the news (too depressing); watching Blue Planet (pretty, but nothing like the world outside our portholes); imagining ourselves going on EVA without suits on (not easy to envision after all these months). So it goes. Earth's glorious color-pallet with its vibrant greens and blues will re-emerge in due time; along with traffic, advertisements, ringtones, and myriad brutal and relentless forms of inanity. For now, all I can do is to focus on this one clean, round number - 100 - as I consider how to spend these last weeks on our simulated planet well.

Then again, maybe that isn't the most important question. These past 8 months have been the first time in our adult lives when were able to focus entirely upon science, adventure, and discovery, unencumbered by petty, mundane intrusions. Try to imagine your world without phone calls or cars horns - or 7 billion other people - and you'll have a glimpse of ours. It's been singular, and kind of fantastic. Maybe these next 100 days are less about eking out every morsel of time we have left on sMars than they are about carving out a parallel island of highly-functional tranquility just like it in our everyday Earth-lives. 100 days to build a place of metaphysical retreat, and to fortify the heck out of it.

Why the drawbridge and battlements? Well, a few months from now we'll walk out that door without our suits on and face the Sun for the first time in 365.5 days without the benefits, and drawbacks, of a thick plastic barrier. For us not to burn, we're going to need a few things. Sunblock - lots of sunblock - for one. A good set of sunglasses and a hat will probably also be required, as well as some kind of psychological umbrella as the relative peace and stillness of our science-world is inundated by a torrent of everything else in the world. When the flow of information, sights, sounds, tastes, and smells flips from "low trickle" to "full blast", some kind of blast-shield is in order. I don't know of what that aegis should consist. I do know that I have one hundred and seven days to figure it out. 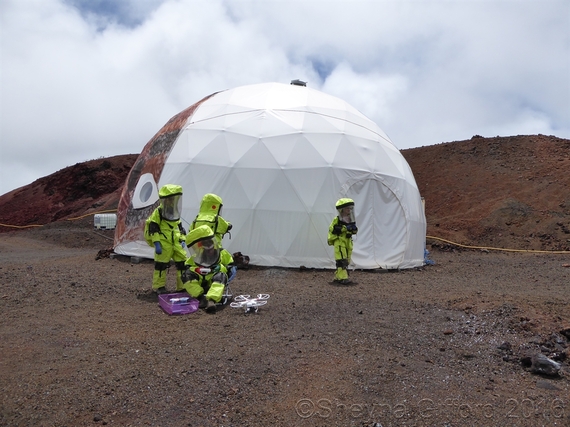 Speaking of which, we still have lentils. LOTS of lentils. It may be a small thing, but I think it can be done. Our mission, should we choose to accept it: to NOT leave these lentils for the next crew. Suggestions, thoughts, and recipes will be gratefully accepted.

* Night and day are somewhat arbitrary delineations of time during interplanetary voyages.