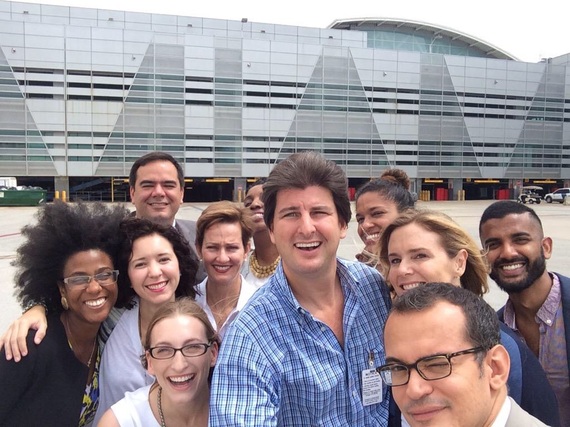 If you care about the future of your city, few infrastructures have as much impact as your closest airport. But how can engaged citizens do anything meaningful to improve something so massive? In most cities there is a gaping void between decision-makers and community members, and public opinion is relegated to soulless feedback forms and tedious public meetings. Engaged communities are powerful, and leaders should be thirsty for ways to tap into the collective intellect and perspective of their stakeholders.

That's what sparked "100 Great Ideas". We're convinced that if communities had low-barrier spaces to participate in meaningful discussions about the future of their cities, they would produce valuable suggestions, strategies, and collaborations. Our first campaign focused on the future of libraries (see the summary here), and this time, we focused on the future of airports. We're Miami based, and both campaigns set their sights on a stronger Miami.

Some context on our airport

Two of Miami's largest industries - travel and trade - are inextricably tied to the airport. As it stands, Miami International Airport (MIA) is a major global player. It is the #1 US airport for international freight, generating $33.7 billion annually; and the #2 US airport for international travel, hosting 20 million travelers a year. In addition to its massive impact on local residents and businesses, it plays a major role in the city's reputation since it is the first (and sometimes only) impression millions of people have every year. Although MIA plays a crucial role in the future of our city, few local residents are actively talking about what the future should look like. We wanted to spark that dialogue, and hoped that the leadership at the airport would be willing to engage as well.

Our model is simple. We launch a discussion on social media with one week's notice. Anyone is welcome to join and post ideas related to the topic. This time around the discussion was five days long, and our prompting question was, "What is your vision for the future of the Miami International Airport?" By the end of the campaign, the group swelled to 900 members, and approximately 150 unique ideas were submitted.

Some pretty clear themes emerged, and we have published our summary here. The Director of the Miami International Airport, Emilio Gonzalez agreed to meet with representatives from the group, so we pulled together a vetting committee of diverse local experts to help us select ten participants who could voice the best ideas from the collective. We concluded the campaign with a behind-the-scenes tour of the airport, and a lunch with the Director himself.

We encourage you to read the full report to get a feel for the most popular ideas from the discussion. Here's a snapshot of the table of contents so you can see the overarching themes. 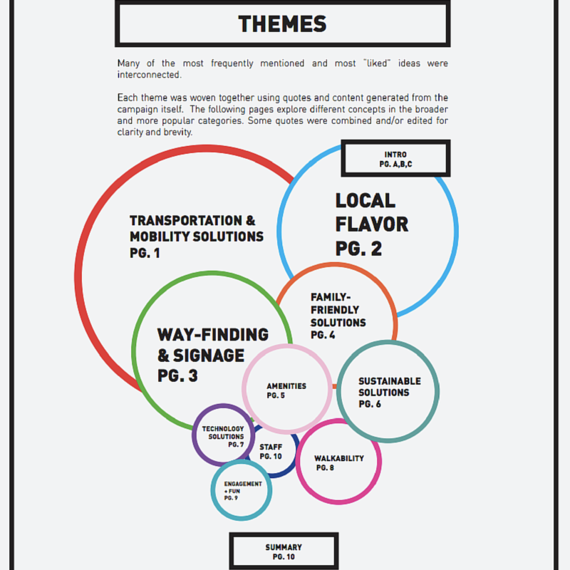 We were enthusiastic to learn that some of the items on our hot-list were already in motion, including a revamping of airport signage, the creation of several indoor playgrounds, and plans for the highly coveted free wi-fi. We hope some of our other ideas will find their way into the plans as well. More importantly, however, we had the chance as a group to learn more about the complexities of innovating within such a dynamic and large infrastructure, and to engage as partners with a common passion: improving our city.

Community members want to shape their own cities, and city leaders want engaged communities. What they need are more low-barrier spaces to work in partnership toward that common goal.

As for this campaign? Our final word is that airports matter. They are the public face for many cities, and they set the stage for business, tourism, and local experience. Communities that want to become more competitive must take their infrastructure seriously, and airports need to be included in that.

With thanks to campaign co-hosts Francine Madera, and Chris Sopher, and with appreciation to our new friends at Miami International Airport, especially Joe Napoli and John Heffernan, who read every single idea from the campaign, and Aviation Director Emelio Gonzalez for being willing to engage so meaningfully with our group. We have a newfound understanding of the complexities of your work, and we're excited to see the innovations to come. Especially the free wi-fi.