More than a decade before the new millennium, Prince had written a song about it. "Party like it's 1999," became a classic and North Americans even used it to usher in the New Year.

According to Andrew Simms, a UK climate change specialist, the world has about 100 months to count down before something less celebratory takes place: 100 months is the time it will take for climate change to reach that inevitable "tipping point" -- the point when the world as we know changes. Runaway changes in weather patterns will start, there will be droughts; some land will be made inhospitable; we can expect to see the collapse of species in the sea and on land. Basically, terribly scary stuff is expected to happen. 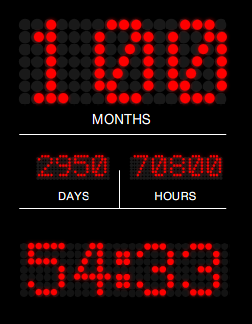 In an opinion editorial in the UK's Guardian, Simms says that "in just 100 months' time, if we are lucky, and based on a quite conservative estimate, we could reach a tipping point for the beginnings of runaway climate change."

For Simms, the 100 month countdown is nothing to celebrate, but there may be time to make some changes. Drawing on the example of the New Deal implemented by US President Roosevelt during the 30s Dust Bowl and depression era, Simms from the New Economics Foundation, outlines UK's New Green Deal (he helped pen), and its associated website onehundredmonths.org, intended to give UK citizens a plan to counteract climate change. The model could work well for America too.

According to Simms' impressive article (I've summed up his points):

More New Green Deals on TreeHugger:
New Deal II: The Next Dam Thing
New Green Deal: 100 Months to Save the Earth From Climate Change
Imagine Another New Deal, Greener Than the First