It's disingenuous that nobody walks in LA--we have a become a stroller's paradise, with art walks abounding in every neighborhood. On Saturday April 18, the micro-berg of West Hollywood, celebrating its 30 years of cityhood this year, joins in the art walk mania and flanneur fever, but in a unique manner that enhances its reputation as "the creative city."

The entire City of West Hollywoodbecomes an interactive gallery with "100 Walkers" --100 living works of art walking pre-determined routes through the city. "100 Walkers," the ambitious Dada-ist art piece from artist Richard Kraft, begins at 2pm in the El Tovar parking lot between San Vincente and Robertson. The walkers, all in black, wearing bowler hats and sandwich boards each with a unique image on both front and back will stroll through city, covering every street, remaining silent throughout. "100 Walkers" starts at approximately 2pm, with the walkers returning to the El Tovar lot by 5:30.

Kraft-a photographer, video, collage and cut-up artist-utilizes a wide range of images from comic and children's books, pop culture, art, and current events on the "100 Walkers" sandwich boards; war, resistance, activists and dissidents share bodies with Ubu Roi, rabbits, snippets of classical art, and phrases. The effect is a subversion of advertising, creating cognitive shifts and sensory dissonance as the sandwich boards are seen in passing (they are especially powerful as cars drive by the walkers!)

Working out of his Mount Washington studio, the London-born Kraft painstakingly constructed miniature walkers with sandwich boards to plot the participants' positions. One wall of his studio is covered with maps of West Hollywood with each groups' route delineated in colored pen, while his collages cover another. Last month, in March, his full-length book featuring collage and text, Here Comes Kitty: A Comic Opera, was released by Sligo Press. "100 Walkers" is by far his most ambitious performance; Walkers, all local volunteers in much smaller groups, have appeared Las Vegas, Death Valley and Los Angeles.

The start of "100 Walkers" can best be viewed from the overlook in West Hollywood Park or from the parking structure at the West Hollywood Library at 2pm. Once the walkers disperse, they can be seen all over West Hollywood til approximately 5:30pm, particularly along all the main thoroughfares: Sunset, Santa Monica, Melrose, Beverly, San Vicente, Doheny, La Cienega, Crescent Heights and Fairfax. (The man open air cafes along Santa Monica Boulevard, Roberston and Melrose also make for good vantage points to catch walkers as the stroll by!) 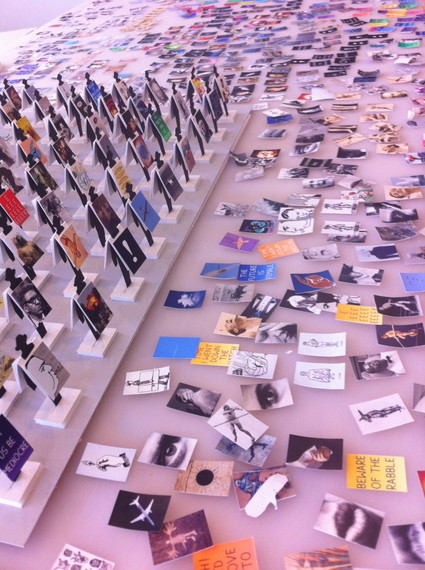 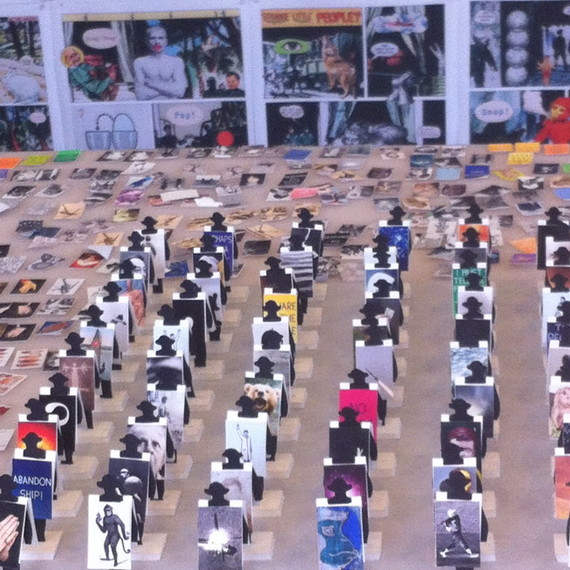 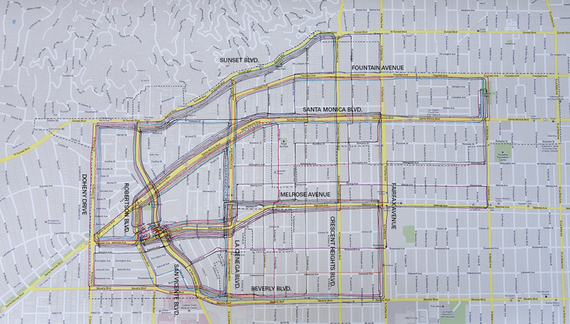