Nearly 100 years after the single biggest loss of life event in the continental United States in the 20th century, video of the disaster keeps popping up. The steamship the Eastland capsized in the Chicago River in 1915, killing 844 people. Two discoveries of video from that day, the first ever made in the century since it happened, show victims fighting for their lives and rescuers scrambling to save as many people as possible. We looked into other Illinois disasters. Check out three of them here: 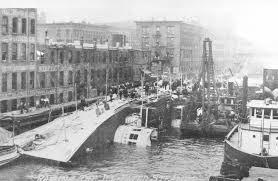 On a Saturday in July, 2,500 employees of the Western Electric company and their family members boarded the ship the Eastland. They were planning to travel from the Chicago River to Lake Michigan for a company picnic on the lake's opposite shore in Indiana, according to the ship's memorial website.

As more and more people began to board, the Chicago Tribune reported, the boat began to rock back and forth. Just after 7 a.m., the ship toppled over on its side only a few feet from the dock, floating in only 20 feet of water. People on the lower decks became trapped inside and despite the boat's relative proximity to land and help, at least 844 people died.

"The screaming was terrible," one man told the Tribune, which devoted 11 pages of coverage to the disaster. "I watched one woman who seemed to be thrown from the top deck. . . . I saw her white hat float down the river, and that was all."

The wreck is the deadliest Great Lakes shipping accident, according to the Tribune, and was the single largest loss-of-life event in the continental United States during the 20th century, according to EastlandMemorial.org.

The Tribune says the weight of the ship's lifeboats might have contributed to the vessel's initial list. New lifeboats were added to its deck after legislation mandated that there be enough boats for every passenger following the sinking of the Titanic three years earlier.

In 2015, a graduate student at the University of Illinois at Chicago uncovered previously undiscovered video footage of the sinking and subsequent rescue efforts, according to Chicago Tonight, with even more footage uncovered by the Eastland Disaster Historical Society, says the Tribune. 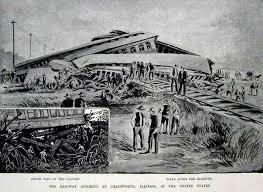 Still considered one of the worst train accidents in the country's history, according to RoadSideAmerica.com, the Chatsworth train wreck killed 85 people around midnight between Aug. 10 and 11.

... the train had "two engines and approximately twenty wooden coaches -- [traveling] from Peoria to Niagara Falls, struck a burning culvert. Of the 500 passengers, about 85 perished and scores were injured."

According to a Peoria Weekly Journal article published later that month, a bridge the train was crossing caught fire, eventually spreading to the train cars themselves.

The coroner's office eventually named Timothy Coughlin as responsible for the fire and therefore for the deaths after hearing the testimony of dozens who saw the wreckage after the crash. However, he was later released due to lack of evidence for a trial. 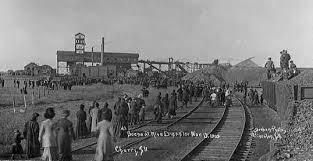 On Nov. 13, 1909, an explosion at an Illinois coal mine killed 259 men and boys as young as 10. The explosion trapped 20 others under the ground for eight days before they were rescued. The accident prompted new support for stricter mining regulations, and the U.S. Bureau of Mines was established in response to calls for better safety procedures, reported the Pantagraph newspaper. The Cherry Mine explosion is known as the country's second-worst mining disaster.

During the commemoration of the disaster's 100th anniversary, the Pantagraph reported that most of the 480 men who went to work at the mine that day were Europeans who had immigrated recently to Illinois.

The fire that caused the explosion began when a lamp got too close to some hay inside the tunnels.

Many of them burned in a fire caused when hay was left beneath a dripping kerosene torch. Flames consuming their bodies and the bodies of mules lit the terror-filled scene as their friends and relatives smothered when a shroud of dense smoke called "black damp" filled the tunnels.

And about the survivors, the U.S. Mine Safety and Health Administration, says The World Magazine in October 1911 reported:

Driven away from the shaft by flame and smoke, the little band found the deadly "black-damp" closing in about them and retreated to the farther recesses of the workings.

Here, by the advice of their heroic leader, they literally buried themselves alive, hoping against hope that rescue would come before the fresh air gave out. Finally, even their solitary lamp refused to burn in the foul atmosphere, the men's brains began to give way from the awful strain, and death drew very near.

See five more disaster sites at Reboot Illinois, including a blimp crash nearly pushed under the rug and the deadliest commercial airline accident in U.S. history.