Martin Luther King, Jr. Medgar Evars. Emmett Till. These martyrs of the American Civil Rights movement remain familiar, although they all died at least 45 years ago. This month marks the 100th anniversary of women gaining the right to vote in Illinois, yet fewer leaders of that game-changing crusade leap to mind.

A century after women's suffrage, how many know that Illinois was the first state east of the Mississippi where women's suffrage became law? That African-American men gained the right to vote in 1870, 50 years before all American women? Or that women were elected to school boards in Illinois before they could vote? 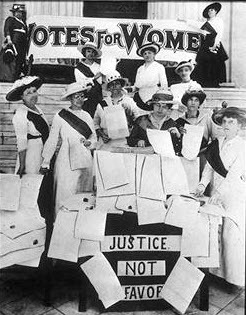 These milestones are more than trivia. They were monumental struggles that started before the American Revolution and did not end until after World War I.

We all owe a huge debt of gratitude to the legions of women who led the fight, many of whom were considered extreme radicals at the time. Most suffragists first fought on behalf of other causes. They protested slavery or lynching or child abuse. They marched for black suffrage and public sanitation. With time, they came to view voting rights for women as a central tenant of a just society. But the idea was initially so controversial that the organizers of the first women's rights convention in 1848 were divided about the idea. Elizabeth Cady Stanton was for "the vote" and Lucretia Mott thought suffrage would make their efforts "ridiculous."

Susan B. Anthony, who many Americans remember as the face of a dollar coin, was another powerful voice for civil rights. Born in 1820, Anthony collected petitions against slavery in her youth; as an adult she co-founded the Daughters of Temperance and then became a women's "suffragist." Anthony gave a reported 75-100 annual speeches in the U.S. and Europe, advocating women's rights. Undeterred by the law, Anthony voted in the 1872 presidential election and was arrested two weeks later. She was tried and convicted for doing what today's women take for granted  casting a ballot.

At least one suffragist's name should be recognizable to Chicagoans: Ida B. Wells. In 1884, long before a housing project was named for her and 71 years before Rosa Parks refused to move to the back of a bus, Ida B. Wells sat firm when a railroad conductor told her to forfeit her seat because she was African-American. After the Civil Rights Act of 1875 banned such discrimination, the Supreme Court struck it down, permitting blatant railway segregation. With her civil disobedience, Wells became a symbol of protest for racial equality. She went on to write exposes about lynching, stage boycotts against injustice and yes, to promote women's suffrage from her home in Chicago.

There are countless others with less familiar names. In the 19th century, Illinois' Frances Willard was a famous suffragist who co-founded the Women's Christian Temperance Union. Willard became the first Dean of Women at Northwestern University and, like Anthony, was a popular speaker on both sides of the Atlantic. Her Evanston home is a national landmark.

Perhaps none of them would care if their names were forgotten. Victory was their goal, not immortality. Susan B. Anthony proclaimed "Failure is Impossible" in her last speech on voting rights. It became the motto of the crusade for women's suffrage. They should still be watchwords for those of us fighting for justice, whether voting rights, gender equality, environmental protection or peace. The road may be 100 years long, but with determination, the destination is inevitable.