A series of commemoration activities on Tuesday for 100 years of U.S. Occupation organized by the Mouvman Patriyotik Demokratik Popilè (the Patriotiic, Democratic, People's Movement) carried the theme, "with or without boots, the occupation still exists." 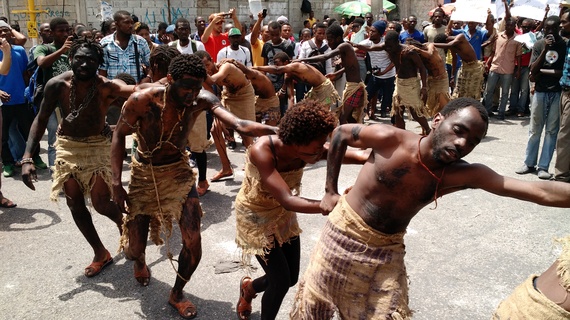 Student activists with "sèk Gramsci" performing at a demonstration outside the Faculté d'Ethnologie. The demonstration headed to Faculté des Sciences Humaines, where hundreds of people attended a series of presentations and artistic performances. Haitian anthropologist Rachel Beauvoir-Dominique underlined the importance of cultural resources stolen during the occupation, and several speakers like Father William Smarthe, Suzy Castor, and Camille Chalmers pointed out the continuities in foreign governance and control.

A Haitian proverb declares konstitisyon se papye, bayonèt se fè: a constitution is made of paper, a bayonet of iron. In other words, the pen is not mightier than the sword. In reality during occupations, the pen is pushed by the sword. During the 1915 U.S. Marines Occupation, a young, ambitious secretary of the Navy, Franklin Delano Roosevelt bragged to have personally written the Haitian constitution, easily scuttled through the puppet regime installed by the Marines. This constitution, formally adopted in 1918, opened up land for foreign ownership, and formalized the linguistic exclusion and hegemony of the ruling classes by naming French as only official language. This constitution paved the way for U.S. agribusiness interests such as United Fruit (Chiquita) to buy up tracts of land, and capitalist speculators such as James P. McDonald to build a railroad, asking to own the tract for 13 miles on either side, almost all of Haiti's arable land. Needless to say this was a boon for foreign investors, and the local merchants who monopolized foreign trade, while expropriating thousands of peasant farmers. This move triggered a massive kako rebellion, of which Charlemagne Péralte was accused of being intellectual author. Marines lay his mutilated body on display on a public square, a warning to others. 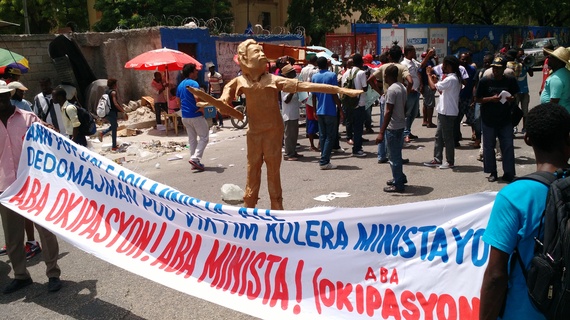 Constitutional changes were also in store during the contemporary occupation. In addition to rejecting the increase in the minimum wage, Bill Clinton and the U.N. are also credited for introducing constitutional reforms. Haiti's 1987 constitution was the culmination of what Fritz Deshommes called a re-founding of the nation. The popular movements that succeeded in forcing out the Duvalier dictatorship stood fast against the military junta and repression. Passed with over 90 percent of the vote on March 29, 1987, the constitution was based on human rights, guaranteeing both liberal political rights like freedom of press, religion, and assembly as well as social rights such as education and housing. In addition, the constitution elevated Haitian Creole as official language, shared with French. Reeling from 29 years of the Duvalier dictatorship, the public was wary of centralization of power in the executive. The office of Prime Minister, to be ratified by Parliament, was put into place. Power was also shared in the Territorial Collectivities, including 570 communal sections.

Despite advances in gender equity and dual citizenship for Haitians living abroad, many of these gains were reversed by the amendments. The amendments to the constitution lay dormant, out of public view. In fact, Parliament voted to dissolve itself to make way for the Interim Haiti Reconstruction Commission (IHRC), co-chaired by Bill Clinton, in April 2010. Importantly the IHRC was to hand over governance to Parliament and the newly elected president. When Parliament was back in session in 2011, the first task laid out for them was to ratify the amendments to the constitution. President Michel Martelly, a.k.a. "Sweet Micky," the winner from the second round of a record low voter turnout of 22 per cent, less than half the previous 2006 elections, pushed for the ratification. He was joined by several foreign agencies, apparently keen on naming the Permanent Electoral Council in a top-down, rushed process that gave the current government the advantage. The coverage of this was murky and confused. Like all other laws, it needed to be published in the official journal of the State, Le Moniteur. Following all this discussion, it was not clear what the final version was. Only the French version was published.

Despite this uncertainty, some sectors apparently considered the constitutional amendments a fait accompli. President Martelly faced a growing opposition, which succeeded in forcing out Prime Minister Laurent Lamothe in December 2014. It was a surprise to many university professors, NGO staff, and activists the constitutional amendments had apparently been accepted, and one of the changes included that the President name a Prime Minister and apparently without requiring a full Parliamentary ratification. The new constitution allows for the leaders of both houses to agree. These two individuals had the most stake in the prolongation of their mandate following the deal reached with Martelly. Another is that the Prime Minister is successor in case of Presidential vacancy.

When Prime Minister Lamothe resigned, Martelly named Evans Paul, a.k.a. K. Plim, who had perennially promoted and positioned himself as "mediator." The terms of the lower house, the Deputies, were set to expire the second Monday of January, which turned out to be January 12, the fifth anniversary of the earthquake. In addition, a third of the Senate's terms were also set to expire, meaning that this house too would be below quorum.

The sticking point in the conflict between Martelly and the opposition was following the electoral law and naming the representatives for the Electoral Council. As Parliament teetered toward collapse, President Martelly's hand grew stronger, and the international pressure to "negotiate" to avoid a "political crisis" grew. In effect international agencies like the European Union, the U.S., the U.N., and the World Bank were lining up to support Martelly. These actors concerned with "democracy" said nothing when Martelly replaced all but a handful of the country's mayors. They indicated that if a negotiated solution -- Martelly's position hadn't changed -- was not reached, they would continue to support the government of Haiti even though he would have to rule by decree. This same state of affairs, ruling by decree, was cited by many of these same international agencies in 1999 as the reason they suspended assistance to Haiti.

What could account for foreign agencies' change of heart?

The final installment proposes an answer.

I would like to thank Alex Dupuy and Ellie Happel for their critiques and advice.

Mark Schuller is Associate Professor of Anthropology and NGO Leadership and Development at Northern Illinois University and affiliate at the Faculté d'Ethnologie, l'Université d'État d'Haïti. He is the author or co-editor of six books, including forthcoming Humanitarian Aftershocks in Haiti. Schuller is co-director / co-producer of documentary Poto Mitan: Haitian Women, Pillars of the Global Economy, and active in several solidarity efforts.