Why would foreign agencies prefer ruling by decree, despite promoting democracy, as the previous post ended?

The first U.S. Occupation of Haiti in 1915 occurred while the European former colonial powers were at war with one another. One particular justification for the invasion was the threat of German influence in the Western hemisphere. In 1909, German financial interests in Haiti topped the French, which had maintained a monopoly after forcing Haiti into debt since the 1825 indemnity, a condition for France to recognize Haitian independence. German financial interests were over a million gourdes (fixed in 1924, during the Occupation, until 1986 at five to the U.S. Dollar). The U.S. was second at just over 400,000 gourdes. The National City Bank attempted to control the customs houses, one of the only sources of revenue for the government. In 1911, National City Bank's Vice President Farnham became Vice President of the National Bank of the Republic of Haiti. In December 1914, just before the U.S. occupation, U.S. warships intervened to transport half a million dollars in gold from Haiti's national reserve. 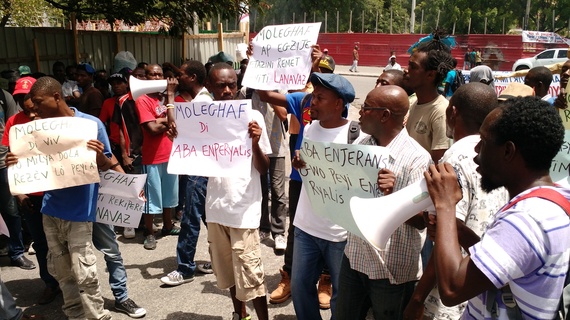 Protestors demanding the return of $10 billion in gold reserves

History repeated itself in this aspect as well. While the UNDP had financed a study in the 1970s, mining activities increased exponentially after the earthquake. On May 11, 2012, reports of mining contracts were unearthed in the press. With a speculated estimated value of $20 billion, this represents a significant wealth. However, given Haiti's infrastructure, especially after the earthquake, there is insufficient in-country capacity and even technical expertise to evaluate contracts. Significantly, the "exploitation" contracts were granted without Parliamentary approval.

However, in February 2013 Parliament responded, issuing a resolution calling for a moratorium on mining in Haiti, citing the questionable legality of the Conventions as one of their main concerns. Shortly thereafter, the Martelly administration successfully recruited the World Bank to support its effort to restructure its mining laws and obtained support from the International Monetary Fund (IMF) to manage mining contracts and create a national cadaster.

Communities and civil society organizations have organized a Mining Collective to promote their interests and defend their rights. At issue was local communities' participation and approval, given the loss of agricultural land and therefore peasant livelihood, not to mention the significant environmental damage mining causes. The contracts made no provisions for environmental review or protections. Finally, the contracts expropriated the vast majority of the profits out of the country. The campaign succeeded in a parliamentary inquiry and eventually a resolution in December 2012 with these safeguards in effect. Mining activity has been on hold in Haiti as the government rewrites the law.

The political situation in 2015, without a parliament and President Martelly ruling by decree, potentially allows for resumption, as this law can be submitted without parliamentary review or oversight which could result in looting. This - in addition to other development strategies such as high-end tourism that benefit foreign capitalist interests at the expense of local communities - is the main motivation Haitian colleagues attribute to the so-called "international community's" support of the current status. In fact the facilitating exploratory law was on the books in 2005, during the "transition" following Aristide's ouster. In addition to secrecy, which seems to be the modus operandi of capital advancement, companies openly cited MINUSTAH's presence as attracting foreign investment and the World Bank ignores local concerns.

The story was largely ignored outside of Haiti until a journalist affiliated with the Republican Party unearthed that one of these no-bid contracts went to the brother of the then-Secretary of State, current Presidential Candidate, Hillary Rodham Clinton, this April.

Today, the 1915 U.S. Occupation is denounced for being explicitly imperialistic. At the time, however, it enjoyed tacit support and occasionally active participation from segments of the U.S. population. President Hoover invited the Tuskegee Institute to participate in an exchange, helping to set up Damien, the School of Agronomy. And troops built a network of roads leading from provincial towns to the capital, which facilitated capital accumulation and centralization in Port-au-Prince. Finally U.S. Marines oversaw the completion in 1920 of a National Palace modeled after the White House. So-called "fair" assessments of the 1915 Occupation note these contributions. However these are almost always an afterthought in the collective social memory, in direct contrast to the ways in which the contemporary humanitarian occupation is being framed by many. Accounts of external efforts, the aid, often lead particular news stories. While the humanitarian effort has been critiqued in even mainstream accounts for its lack of coordination, failures in delivery, and shortcomings - notably in a June exposé of the Red Cross - the discussion usually leaves intact foreigners' good intentions, a reflection of what French medical anthropologist Didier Fassin called humanitarianism's "moral untouchability." One trope that has received increasing foreign attention is the impropriety of the Clintons, and occasionally the ineptitude of the U.N., however these accounts are most promoted within partisan outlets such as Fox News.

What accounts for the difference in the understanding of the 1915 Marines Occupation and the contemporary humanitarian occupation? It must first be said that there are obviously differences of opinion, then and now. French anthropologist Michel Agier has called humanitarianism the "left hand of empire." The June 17 shooting in a historic Black church in Charleston, South Carolina and placing the Confederate flag below a Black Lives Matter poster at Martin Luther King's church highlight that indeed racism is alive and well in the U.S. However, justifications for intervention must now be done on universal, "humanitarian" grounds instead of the "white man's burden." Another difference is the proliferation of media forms and especially outlets. Humanitarian agencies have greater access to shape public discussions through blogs, Facebook, Twitter, and Instagram. Their efforts and intentions are received by tens if not hundreds of thousands of followers.

In 1915, U.S. Empire was in its ascendency; the Spanish-American war granted U.S. control of Panama, Puerto Rico, and the Philippines. The so-called "Dollar Diplomacy" gave way to the more erudite "mission civilatrice" of Wilson, whose delay into what he called "the war to end all war" allowed U.S. American might to be cloaked in obligation. Now, U.S. Empire is showing signs of faltering. The U.S. financial debt to China and Saudi Arabia thwarts principled human rights justifications, the European Union and Japan provide counterweights to the hegemony of the U.S. dollar, the majority of Latin American nations elected leftist governments who set up cooperative institutions challenging the U.S., and Bush's failed 2003 invasion of Iraq was done without the U.N.'s blessing. Haiti provided a stage for readjustment. Haiti in 2004 re-united France and the U.S. over the ouster of Aristide (recall the fever pitch to which U.S. neoconservatives' anti-French sentiment with the renaming of "freedom fries" in the Capitol). The right-wing Heritage Foundation published a position paper a day after the 2010 earthquake about the latter being an opportunity for the U.S. to reassert dominance in the region eroded by the U.N. troops, Cuban medical assistance, and Venezuelan institutions like Petro Caribe.

What is necessary is a critical history of the present, following an "anthropology of the past," clear enough to pierce the fog of ideology. Such a position requires moral courage, to be willing to suffer consequences for defending present-day kako such as Charlemagne Péralte or even Dessalines.

I would like to thank Alex Dupuy and Ellie Happel for their critiques and advice.

Mark Schuller is Associate Professor of Anthropology and NGO Leadership and Development at Northern Illinois University and affiliate at the Faculté d'Ethnologie, l'Université d'État d'Haïti. He is the author or co-editor of six books, including forthcoming Humanitarian Aftershocks in Haiti. Schuller is co-director / co-producer of documentary Poto Mitan: Haitian Women, Pillars of the Global Economy , and active in several solidarity efforts.