Christina Summitt, a New Jersey mother of three, says she's had horrible luck her whole life. But she received a well-timed stroke of good fortune when a stranger left her a $1,000 tip on an $80 bar tab.

Recently, her 3-year-old dog Tucker, a half Labrador retriever, half Great Dane, swallowed a plastic ball, which got lodged in his intestines. Tucker desperately needed surgery, but the cost was roughly $3,000. Summitt, who also rescues pit bulls in her spare time, recounted her worries about the financial burden to a couple during her Saturday bar tending shift at the Holiday Inn in Clinton, N.J.

When the unnamed man paid the couple’s bill at the bar and added the humungous tip, Summitt couldn’t believe her eyes.

“I started crying and shaking and I don’t think I could breath,” she told The Huffington Post. "I couldn’t read the receipt because my eyes were so swelled up. I asked my sis, who bar tends with me, to read it, and she said, ‘Holy s--t there's three zeros!’” 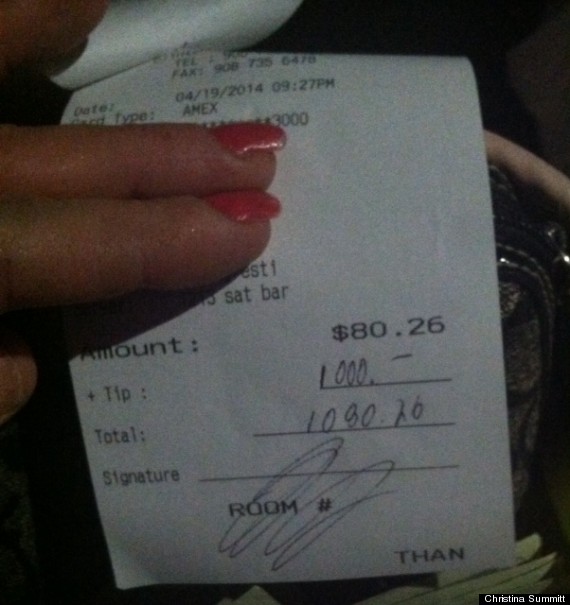 After the initial shock wore off, Summitt says she went over to the generous man and told him she couldn’t accept the tip. The patron, who Summitt says is “well-off” and “likes to pay it forward with good deeds,” convinced her to keep the tip to help pay for Tucker’s surgery.

Summitt, who also works as a chef at the hotel and prepares food at a local deli, says she never thought something like this would happen to her.

“I've always seemed to have really horrible luck my whole life. A bill will come in, then my car blew up, then the furnace wasn't working. It was literally one of the worst years for us. Everything broke for us,” Summitt recalled of the troubles she and her husband, who also works full time, have faced recently.

Tucker underwent surgery to remove the ball from his intestines on April 19, just hours before she received the tip. He is now recovering remarkably, Summit says.

“I’m not tooting my own horn, but I know I’m a good person. I go out of my way to help people and save doggies and donate my money to pit bull rescue,” Summitt told HuffPost. “I was blown away that it was finally my turn, stuff like this doesn’t happen to me.”