BOSTON, AP -- In an economic downturn, it might be tough to get your head around this: rare sheets of $100,000 bills, fabulous gold treasures dating back to the California Gold Rush era, rare coins including those tied to the first stirrings for America's independence and federal government securities worth more than a billion dollars.

That's the backdrop of the country's premier money show, the World's Fair of Money, which has brought about 1,000 coin dealers and hundreds of collectors to Boston, seeking to tap into the surprising resilience of the coin industry. 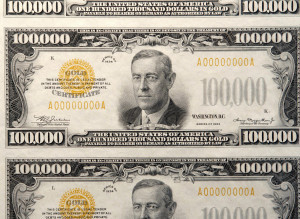 It also includes sheets of America's largest denomination currency, the $100,000 bill, which is said to be worth about $1.6 million today. The gold certificate note, which bears President Woodrow Wilson's portrait, was used only for official transactions between Federal Reserve Banks. It was not circulated among the general public and cannot be legally held by currency note collectors.

"The reaction from kids to grandparents is universally the same: `Wow, that's a lot of money.' So, they wouldn't mind having it," Kevin Brown, manager in the marketing division of the U.S. Treasury Department's Bureau of Engraving and Printing, said while holding the $100,000 bills. "People like to see money."

There even was some free money at the show after the Bureau of Engraving and Printing handed out $150 bills to some children as souvenirs - thoroughly shredded and packed into tiny plastic bags.

The show, which ends Saturday, includes a comprehensive collection of U.S. paper money that has never before been exhibited. It has coins from the Mexican War of Independence and Mexican Revolution that are being seen outside of Mexico for the first time since 1970. There also are rare coins worth several million dollars.

The SS Central America, which sank in a 1857 hurricane off the coast of North Carolina with more than 400 passengers and 30,000 pounds of gold from the California Gold Rush, made its inaugural appearance in Boston. The exhibit features more than $10 million in gold treasure recovered from the ship, also known as The Ship of Gold.

Other historic items include one of the few known surviving copies of the Declaration of Independence printed in Boston circa July 17, 1776, and silver spoons crafted by Paul Revere.

"It's overwhelming. I mean, I have been to a couple of these other conventions and I've never seen this much, this many high-level items as you're seeing here. Just the exhibits they've got in this whole museum area, incredible," Jim Moorey of Northbridge, Mass., said while visiting the show with his 13-year-old son, Tyler.

More than 3,400 coins, paper money, medals, tokens and other numismatic items were being auctioned at the event, including a New England shilling struck in 1652, as sentiment for America's independence grew.

Greg Rohan, president of Dallas-based Heritage Auction Galleries, said his company expects to raise $40 million dollars at its auction at the money fair. During the five-day show, more than $100 million will trade hands, he said.

"It's people who've decided they'd rather have the round, metal coins that we sell than $40 million in cash that they have in the bank," Rohan said.

There are an estimated 200,000 serious coin collectors in the United States and more than a million casual collectors who spend about $3 billion annually, he said.

"The economic conditions have not diminished the demand for material from the standpoint of collectors who seek and desire to own the rare and exquisite pieces," said Larry Shepherd, president of the Colorado Springs, Colo.-based American Numismatic Association.

Demand also has been fed by rich people who are increasingly willing to store some of their wealth in rare coins with a proven history of gaining value after traditional investments vehicles, including real estate and the stock and bond markets, dipped to woeful levels during the economic crisis, Shepherd said.

"The very best coins, the very rarest coins, are worth as much today, if not more, than they were before September 2008," Rohan said. "So if you had bought rare coins prior to 2008, you've got the same value, if not more, today."

The rest of the coins have seen their fortunes range from gains of 10 percent to losses of up to 25 percent.

Still, that did not stop Brian Hendelson of Bridgewater, N.J.-based Classic Coin Company from offering to pay about $100,000 for a gold ingot salvaged from SS Central America.

(This version CORRECTS Corrects spelling to Hendelson instead of Henderson throughout. This story is part of AP's general news and financial services. AP Video.)