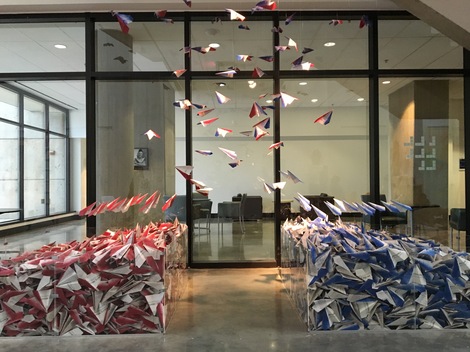 Sex, religion and money. These used to be the subjects to avoid. Now, it is politics. Co-workers, friends, even families are torn asunder by the presidential campaign. Emotions flood the field of rational discourse. In our search for conversational high ground, we find refuge in discussing the weather.

Safe though they may be, our lengthy elocutions on heat and humidity crowd out important discussions. We engage in magical thinking when we assume everything will be fine once the November elections are over. Think again. Anger and fear, the oxygen of extremist politics, will not be quelled by election returns - they will be fueled by the results. We have to talk.

Second, we must take responsibility. We, the People, complain about gridlock politics, and yet we are the problem. Through our votes, or lack thereof, we strongly support the political status quo. Despite near single-digit Congressional approval ratings, in the last election we voted 96% of incumbents back into office.

And that is why I folded an entire year's worth of the United States Congress's efforts into paper airplanes, 10,718 of them to be exact.

As a Washington, DC sculptor (and former U.S. Senate aide) I decided that if reasoning wasn't working, maybe art would. I bought a year's subscription to the Congressional Record, the official transcript of Congressional proceedings and debates. And I began folding each page into a paper airplane.

I can't lie. There was something decidedly cathartic about tearing apart an issue, then transforming each page into a paper airplane. One really can't stay angry or even righteously indignant while folding a paper airplane, so the therapeutic benefit more than offset the paper cuts.

An accurate estimate of how many pages Congress might produce was essential so I might set a daily folding goal. Thirty airplanes per day may sound easy, but a long weekend off could be punishing. I researched folding methods to choose the best design, not for flight, but for storage. I had to determine how much space a year's worth of Congress's efforts would require. One hundred and thirty-two cubic feet sounds massive until you stack them and find that they aggregate quite nicely into a cube roughly five feet in each dimension. 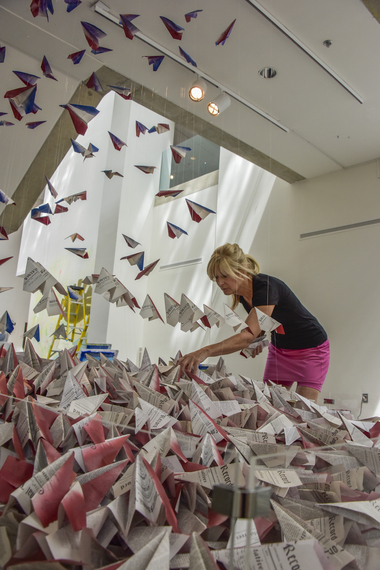 I folded in cars, trains, and airplanes. I folded to avoid shoveling the driveway in winter. I folded in the waiting rooms of doctors, dentists and the car repair shop. I folded whenever I could. Then, slowly, something remarkable happened. As people learned of my project, they asked to help fold. As an artist, it was antithetical to me to have other people create my art, and yet I welcomed their assistance. As they helped fold, my political art installation became something bigger, more communal. It became ours.

From twelve states and the District of Columbia, people helped fold. Folders span age groups and ethnicities, income brackets and ideologies. They include a Utah farmer, a Smithsonian philanthropist, an unemployed college graduate, a national security analyst, even a gun-toting, female judge. And plenty of millennials--they folded in force.

One afternoon, as two young professionals were folding Congressional Record paper airplanes--one a Texas-red conservative, the other a New York liberal--I noted their animated conversation and their laughter. They were discussing issues, comparing their opposing views, and actively seeking topics on which they could agree. They listened to each other, they engaged. They made it look easy.

Thus was born UpdraftAmerica.org. I formed a team of Republicans, Democrats and a terrific Independent. Together, we have created a website and, indeed, a social/political movement to give voice and visibility to people who are willing to compromise, to loosen the grip on their ideologies just enough to shake the hand of someone whose worldview differs.

The dream of a new political paradigm began forming, in which it wasn't reds versus blues, but rather a whole bunch of people in the middle, working together to find common ground, no longer allowing extremists at either end to block progress.

Our development team struggled with ideologically loaded language and varying viewpoints, but we were undaunted in our effort to realize the vision that is Updraft America. Just as we ask others to do, we roamed into the uncharted territory that separates our political views. We broke bread together, enjoying the sense of mission that comes from combining efforts in common cause. And we learned to talk, really talk.

Find your voice. Fold your own paper airplanes. Visit UpdraftAmerica.org.

And if you can, visit the Updraft America art installation. A year after the first set of wings was creased, our ten thousand airplanes can be viewed at American University's Katzen Museum in Washington, DC, through October 23rd. The planes, striped red and blue, and are amassed in opposing bins. The uppermost one rise into the air and as they do, their hues merge to become purple, the color of reason in politics.

Suzanne Brennan Firstenberg is a sculptor in Washington DC. During 2016, her art has been exhibited across the United States and in China where her team was awarded the prize for creativity in the Harbin International Ice and Snow Sculpting Competition this January.