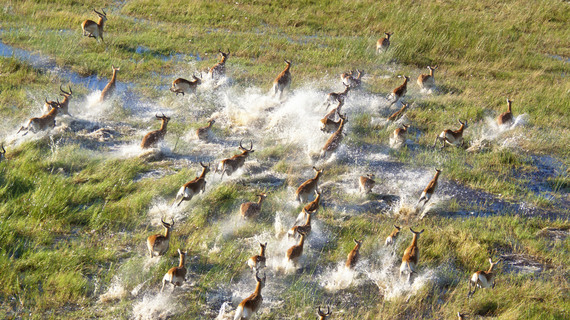 With annual flooding between June and August, this astounding delta is formed as the Okavango River meets with the basin of Botswana's Kalahari - the water eventually evaporating or draining into the surrounding areas. As the delta fills up during what are the driest months across the rest of Botswana, animals from far and wide congregate in the area, resulting in one of the greatest concentrations of wildlife in Africa. As well as being made the 1000th UNESCO World Heritage Site, the Okavango Delta has justifiably been named one of the Seven Natural Wonders of Africa. Careful conservation of the habitat means that there are only a select few lodges and camps to stay at, from where you can explore the delta's waterways while seeking out creatures both large and small. 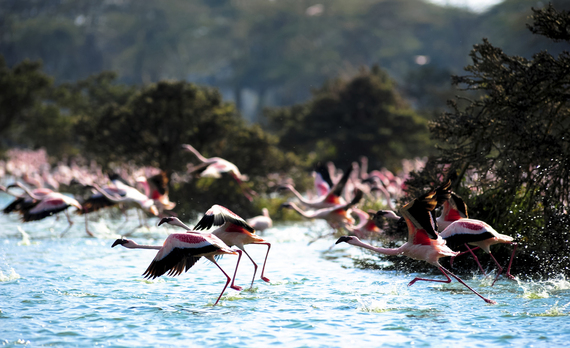 2. The Kenyan Lake System of the Great Rift Valley

In the Great Rift Valley that stretches across Kenya, the three lakes Bogoria, Nakuru and Elementaita, make up Kenya's lake system, covering an area of over 32,000 hectares. This area of outstanding beauty is an important habitat for birdlife, with many endangered species among the abundance of birdlife that's known as one of the world's most diverse populations. The lakes are perhaps best known for their flocks of pink flamingoes, as the number one site worldwide for foraging lesser flamingoes, but they are also a nesting and breeding site for great white pelicans, and mammals like black rhino, Rothschild's giraffe and lions roam the land. Stay at a safari lodge to explore the volcanic land and experience its diversity of both birdlife and mammals. 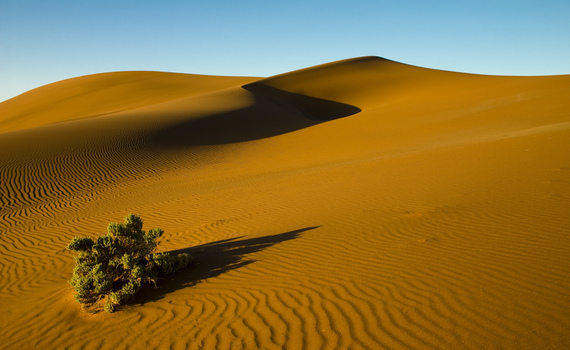 This immense coastal fog desert in Namibia encompasses large shifting sand dunes, covering over three million hectares of the Namib-Naukluft Park. The harsh environment's many endemic plant and animal species are fascinating proof of the natural world's ability to evolve and adapt to extreme conditions. See oryx, zebra and desert giraffe, as well as smaller animals like meerkats. The Namibrand Reserve, within the Namib Sand Sea, is an ideal area to base yourself, with sand dunes, canyons and savanna to explore. Flying safaris are a popular way to experience Namibia's desert too, enabling you to travel across the vast expanse of land and see the spectacular golden sand dunes from above. 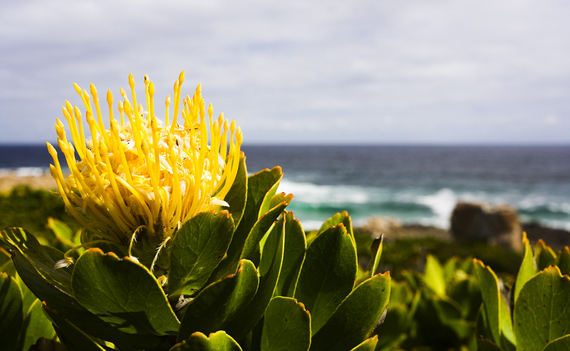 Near the southern tip of South Africa, this region around the eastern and western Capes is one of just six designated floral kingdoms worldwide, due to its incredible diversity of flowering plant species - some of which are endemic - that make up 20 percent of all of Africa's flora. Officially recognised as a biodiversity hotspot, the UNESCO World Heritage Site includes eight nature reserves and wilderness areas, with Table Mountain National Park among them. Base yourself in Cape Town for exploration of the coastal region, and if you go in Spring - from August to mid-October - you'll see areas that are carpeted in flowers. 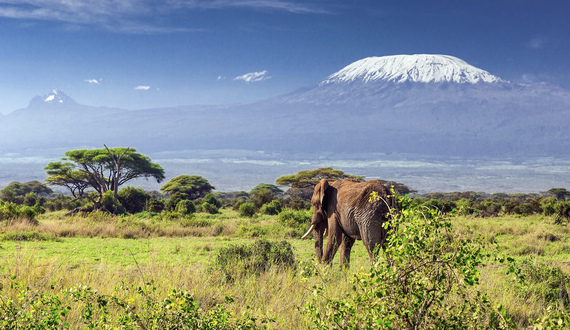 Mount Kilimanjaro in Tanzania is Africa's highest peak at 5,895 metres, while the surrounding savanna and forest of the national park stretch across a staggering 75,575 hectares, creating a striking contrast between the snow-capped peak and African plains. Such a unique landscape affords unique zones of vegetation, which along with its population of endangered species has given the national park its global status. Take on the challenge of summiting Mount Kilimanjaro and trek through each of the environmental zones it encompasses. January, February and September are the optimum times to go, with warmer and drier days than the rest of the year. 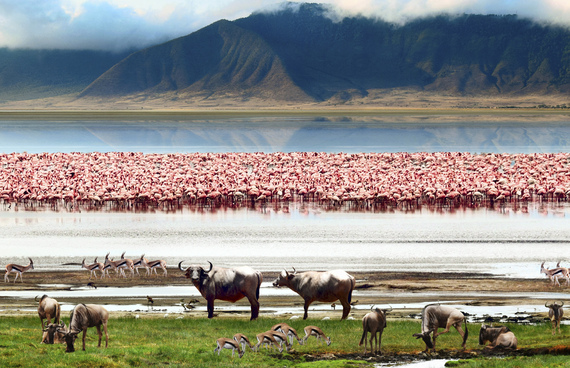 As another of Africa's Seven Natural Wonders, Ngorongoro Conservation Area is a vast volcanic caldera in the crater highlands, west of Arusha. This UNESCO World Heritage Site is protected with both its landscape and wildlife in mind, while also taking into account the indigenous Maasai community. Montane forest, grassland and bushland, as well as the Magadi salt lake and Ngoitokitok Spring, are home to black rhino, hippopotamus, wildebeest and zebra, and a healthy population of lions. Stay at a lodge in Ngorongoro Crater to discover the region for yourself. 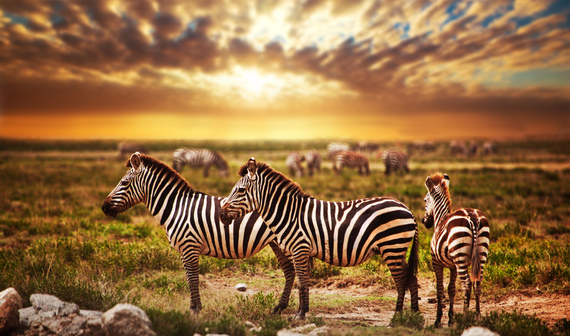 This vast expanse of land is the setting for Africa's Great Migration, a natural phenomenon in which the wildlife population moves through the land with the seasons - named another of Africa's Seven Wonders. Serengeti National Park crosses over between the Mara and Simiyu regions with a habitat of grassland, woodland, riverine forest, swamps and kopjes, and great numbers of wildebeest, gazelles, zebra and buffalo, plus a remarkably large population of lions. In fact, the national park originates from a game reserve that was established to protect its lion population.Visit the north or south Serengeti to witness the annual migration. 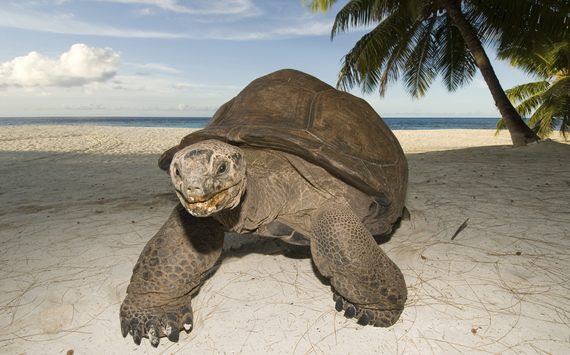 As the world's largest coral atoll, Aldabra consists of four large coral islands and a lagoon, surrounded by coral reef. And, in its remote location amongst the Seychelles' outer islands, the atoll is uninhabited, remaining incredibly untouched to this day. The coral islands have become known across the globe for having as many as 100,000 giant tortoises, making it the world's largest population of these creatures. Plus, large seabird colonies and the world's largest arthropod, the coconut crab, add to the atoll's natural importance. Visitor numbers are strictly controlled, so permission needs to be obtained before arranging a boat charter out to the atoll. 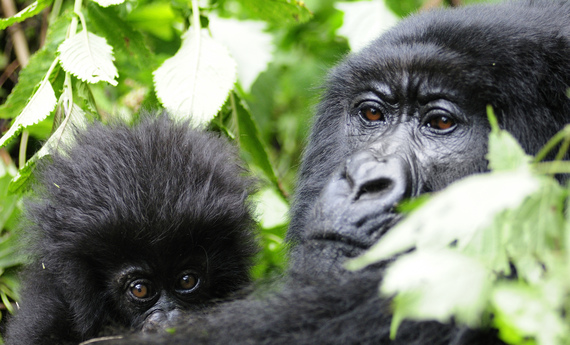 Stretching across 331 square kilometres of jungle, montane and lowland forest, this national park in Uganda is an extraordinary section of Bwindi Impenetrable Forest, on the border of the Democratic Republic of Congo. The national park is most famous for its population of endangered mountain gorillas - with half of the world's mountain gorilla population - but the area has an abundance of other species and is recognised as one of the richest ecosystems in Africa. As many as 120 mammal species, 348 types of birds and 220 butterflies are among the fauna of more than 1000 flowering plant species, 163 tree species and over 100 different ferns. Base yourself at one of the forest's lodges or camps to trek through this wildlife-rich environment, before coming face-to-face with the gorillas. 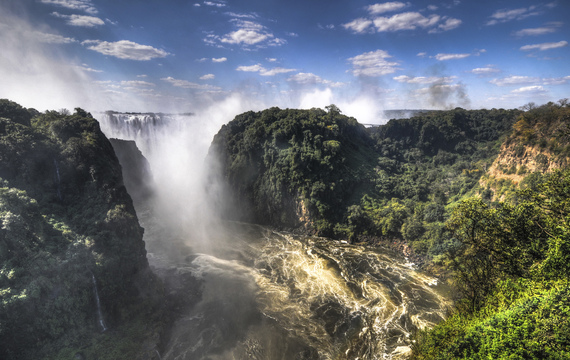 As the two-kilometre wide Zambezi River tumbles down a series of gorges, thundering into the waters below, the spectacular falls send up spray and mist that can be seen from as far as 30 kilometres away. Gorges and islands around the falls are an important breeding site for endangered bird species too, but the UNESCO World Heritage Site also comprises the 3,779 hectares of Mosi-oa-Tunya National Park, 2,340 hectares of Victoria Falls National Park and 741 hectares of Zambezi National Park where herds of elephants can be seen. See Victoria Falls and explore the surrounding national parks by staying at one of the nearby lodges. 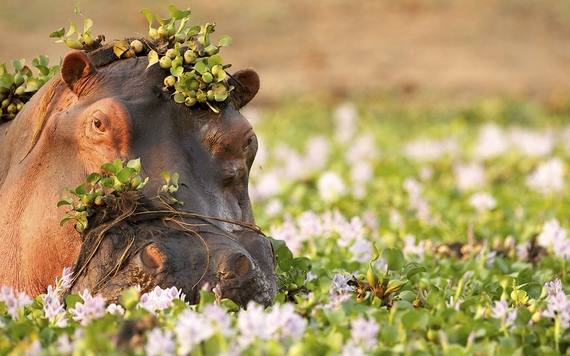 In northern Zimbabwe, this area of islands, sandbars, pools and forest - named Mana, meaning four, after the four permanent pools there - lies on the banks of the lower Zambezi River where floodplain turns into a series of lakes after the rainy season has come to an end. With the dry season, wildlife is drawn to these lakes, so as well as the park's population of hippos and crocodiles, elephant and buffalo are often seen. While on safari in Mana Pools National Park, explore the scrubland on foot or navigate the pools by canoe. 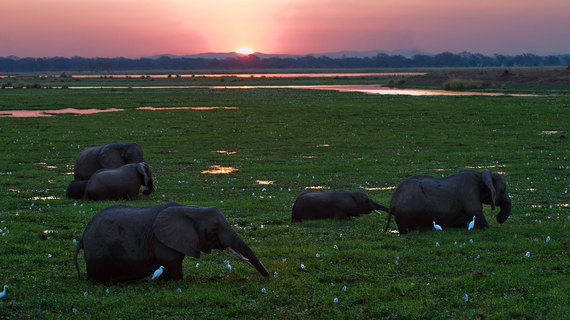