The world is set to go comet crazy next month, as the highly anticipated Comet ISON comes into view.

"Comet ISON has the potential to be among the brightest comets of the last 50 years," University of Maryland astronomer Dennis Bodewits told NASA.

Sounds cool. But what exactly is a comet? How many are out there, and do they pose a danger to Earth? Keep reading to learn 11 fascinating facts about comets. Some will surprise you.

FACT #1: There are LOTS of comets out there. Scientists so far have discovered about 4,000 comets, and evidence suggests there may be hundreds of millions more -- perhaps trillions.

FACT #2: All comets orbit the sun. Comets come in different shapes and sizes, but all orbit the sun. "Short-period" comets come from the Kuiper belt, a disc-shaped region of icy bodies located beyond Neptune's orbit, and take less than 200 years to make a full orbit. Long-period comets like ISON come from the Oort cloud, another swarm of objects that lies hundreds, maybe even thousands of times farther than the Kuiper belt, near the very edge of our solar system. These comets can take millions of years to complete an orbit. Rare hyperbolic comets may pass through the solar system only once before being flung out on a hyperbolic trajectory into interstellar space. 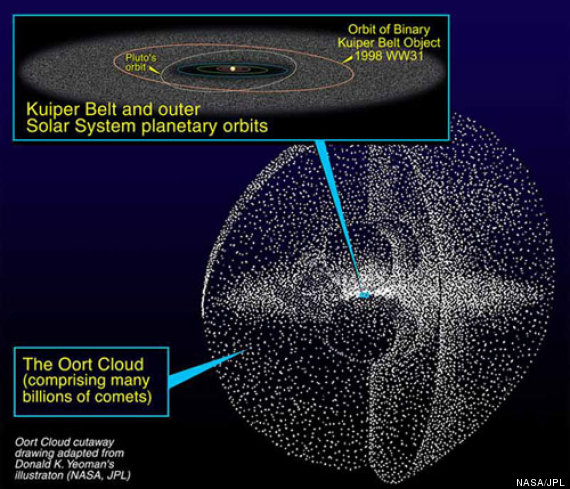 Artist's impression of the Oort Cloud.

FACT #3: Comets can strike our planet -- and have. New research suggests that a comet smashed into the Sahara desert some 28 million years ago. Earlier this month, scientists reported that a tiny pebble found in Sahara -- dubbed "Hypatia" -- came from the comet's icy core (nucleus). 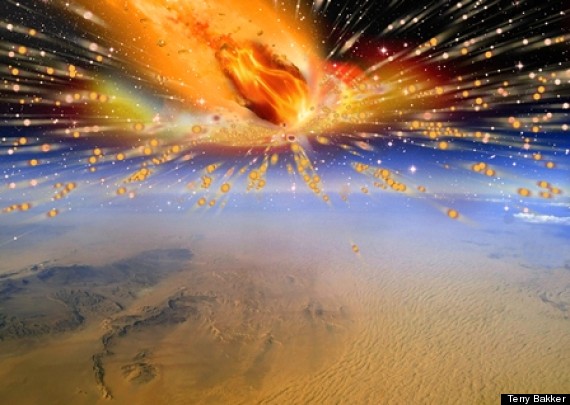 An artist’s rendition of the comet exploding in Earth’s atmosphere above Egypt.

FACT #4. Comets may have brought life to Earth -- and filled our oceans. In 2009 a NASA space probe took a sample from comet Wild-2 and found that it contained the amino acid glycine -- an essential building block of life. A recent study suggests that comet collisions may have brought 22 trillion pounds of organic material to Earth, and provided energy for the synthesis of more complex molecules.

In 2011 scientists also discovered that the water inside a comet had nearly the same chemical composition as the water in Earth's oceans -- suggesting that comets may have brought water to Earth billions of years ago.

Fact # 5. A comet's core is like a dirty snowball. The nucleus of a comet is composed of ice, dust, and rock -- debris left over from when the solar system formed 4.6 billion years ago. Comet nuclei are among the darkest objects in the solar system, reflecting only four percent of light that hits them. Most nuclei are less than 10 miles across, and are irregular in shape because -- unlike planets and stars -- their low mass does not exert enough gravitational force to make them round. 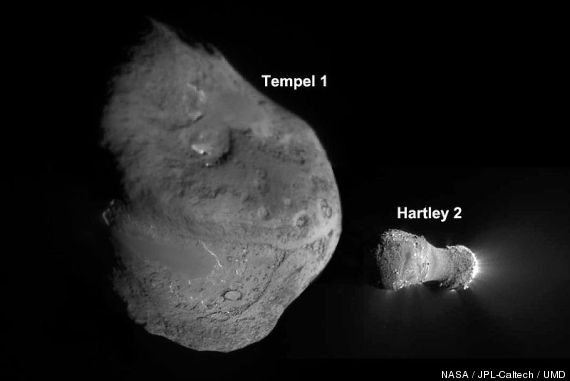 This image shows the nuclei of comets Tempel 1 and Hartley 2, as captured by NASA's Deep Impact spacecraft.

FACT #6: Comets have their own atmospheres. The fuzzy cloud surrounding a comet's nucleus is called a coma. As comets approach the sun, ice in their nuclei is converted to a gas. The gas spews outward from the nucleus, forming a thin atmosphere that can grow to 60,000 miles or more in diameter. In 2007 the coma of Comet Holmes was found to be an astonishing 869,900 miles in diameter. That's larger than the diameter of the sun! 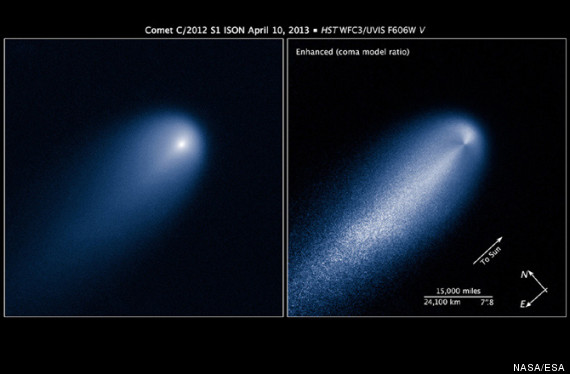 FACT #7: Comets have two tails -- not one. As comets approach the sun, solar wind and the sun's magnetic field sweep particles from the coma into tails that stretch behind the comet's head. Dust particles form a curved tail that can stretch up to 60 million miles in length. Comet ISON's dust tail is believed to span about 57,000 miles. Ionized gas forms a separate, blue-colored tail that points directly away from the sun and can stretch as long as 360 million miles. 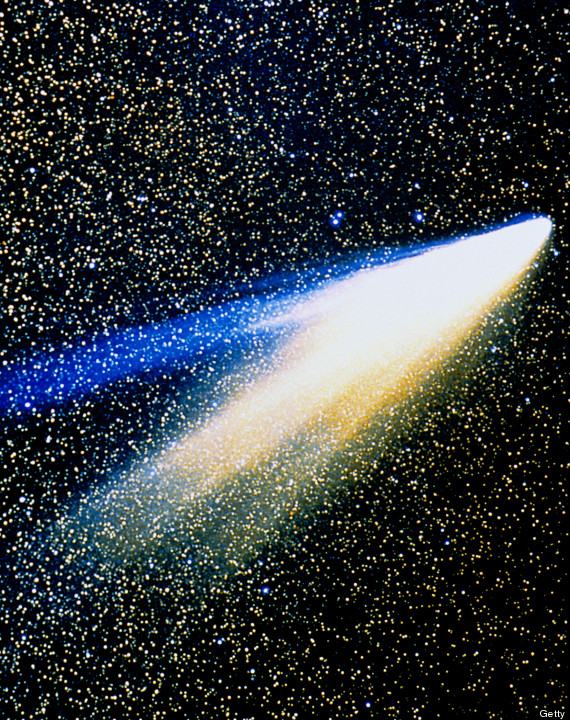 Image of comet Hale-Bopp with its two tails, taken on 1997.

FACT #8: Comets have been observed for millennia. Around 500 B.C., Greek philosophers coined the word "komotes" -- literally, "long-haired" -- to refer to the comets they observed in the sky.

The most famous comet ever observed, of course, is Halley's comet. Its orbit brings it near Earth about once every 76 years. Some scholars say it was first recorded by Chinese astronomers in 239 B.C. Others argue that it was spotted in Greece around 467 B.C. In any case, it was Edmund Halley who first concluded in 1705 that three comet sitings from 1531, 1607 and 1682 were most likely observations of the same comet. Halley's comet is set to appear next in July 2061. 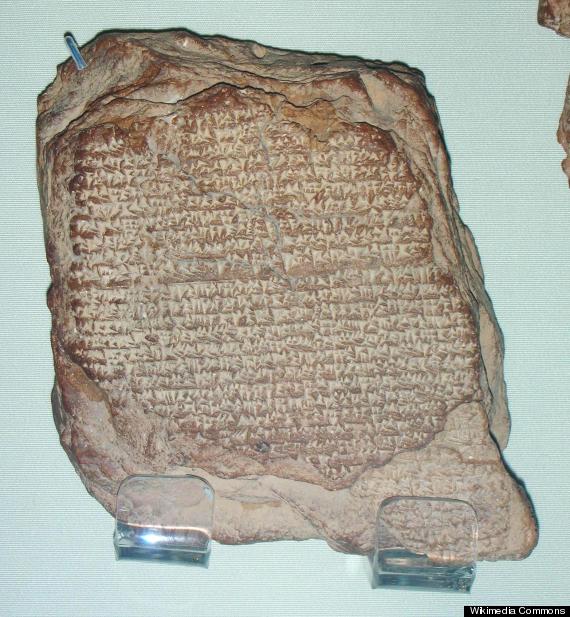 Halley's comet sighting recorded by the Babylonians on a clay tablet in cuneiform, 164 BC.

FACT #9: Comets have inspired some wild superstitions. Over the years, comets have been interpreted as signs of impending doom -- or harbingers of good fortune. Roman Emperor Nero thought a comet foreshadowed his assassination, and so he had all his living successors killed. Pope Callixtus III actually tried to excommunicate Halley's comet, believing it was an agent of the devil. William the Conquerer considered a comet a good omen before his invasion of England in 1066. 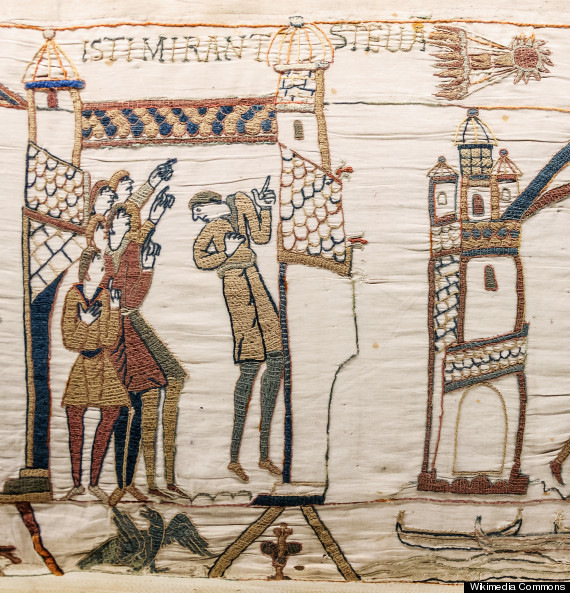 The comet's appearance in 1066 was recorded on the Bayeux Tapestry, a textile that depicts the Norman invasion of England.

In 1909, some thought Halley's comet would cause a great explosion, or envelop the world with laughing gas. Others just enjoyed seeing the comet -- with some Manhattanites quaffing "comet cocktails" at rooftop parties.

FACT #10: Comet leftovers create meteor showers. Along their orbits around the sun, comets shed small rocks that form into a "dust trail," or meteoroid stream. When Earth passes through the stream, we see a meteor shower. For instance, every year skywatchers can spot the Perseid meteor shower as Earth moves through the orbit of comet Swift-Tuttle. Comet dust also falls to Earth -- at a rate of approximately one billion dust particles per second. 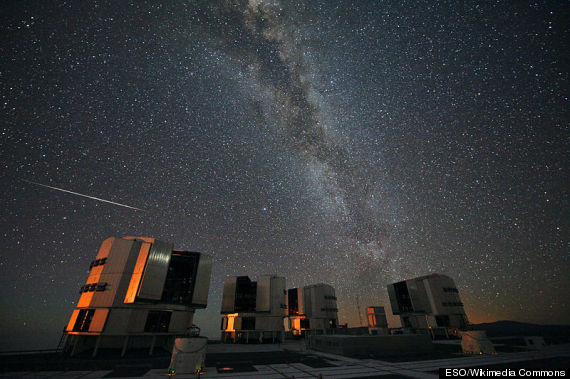 The 2010 Perseids over the European Southern Observatory's Very Large Telescope in Chile.

Fact #11: Comets can become extinct -- or explode. They can "go extinct," losing their volatile materials and becoming small lumps of rock. Or the sun's gravity can break them up into pieces when they pass by a little too close. Watch a comet's "death-dive" below.

To compare some of the best-known comets -- including ISON -- check out the data table below.
Compare Comets and Asteroids