Now that winter is upon us and an end to the frenzy of the holidays in sight, visions of escape routes to warmer climates are starting to dance in our heads. Coastal and beach towns along the southern Atlantic seaboard are offering off-season rates and special weekend packages making their charming destinations and temperate winter climate even more attractive. Below is a diverse list of coastal towns offering differing appeals to suit every taste in travel. 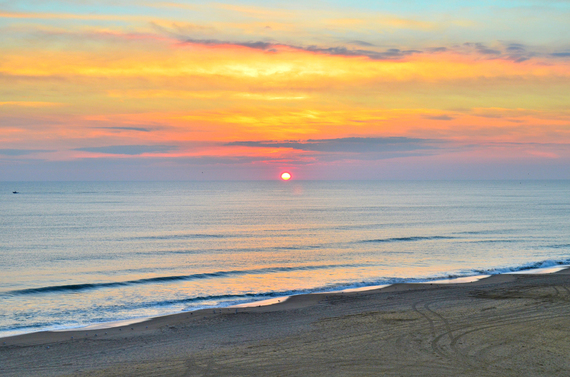 Virginia Beach is the spot where the Atlantic Ocean meets the Chesapeake Bay. The area contains three beaches, each with a different appeal to families, surfing and eco-tours, or those seeking the iconic beach with a three-mile boardwalk, shops and restaurants. The Virginia Aquarium has 800,000 gallons of aquariums and live animal habitats including Komodo dragons, crocodiles, cobras and eagle rays. Next to the aquarium is the Adventure Park with the largest ropes and zip line course in Virginia. At Sandbridge Beach, explore the dunes or take a hike Back Bay Wildlife Refuge. Don't miss the oyster farm boat tour with Pleasure House Oysters at Chesapeake Bay where tourists can sample legendary raw and roasted Lynnhaven Oysters. 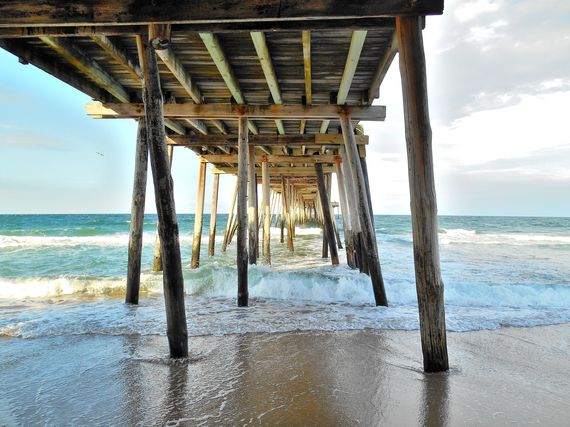 The Outer Banks is string of narrow barrier islands stretching across the coast of North Carolina. Weather on the islands is temperate year round, and a long beachfront make it a popular tourist destination, especially along the protected Cape Hatteras National Seashore. The Outer Banks has been called the "Graveyard of the Atlantic" due to the sometimes dangerous surf that caused many shipwrecks in the past. The claim to fame occurred in 1903 near the coastal town of Kitty Hawk where the Wright brothers launched their first flight. Adventurous tourists can experience hang gliding here by either taking lessons then jumping off the dunes, or get launched up to 5,000 feet in the air strapped to an experienced tandem pilot.

Stay: The Inn on Pamlico Sound 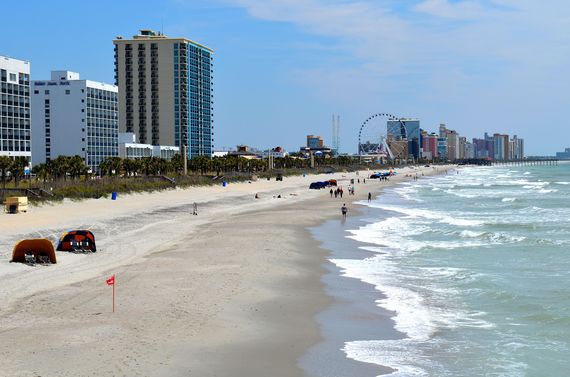 Nestled along the Atlantic Ocean, Myrtle Beach is a fun-filled family destination with accommodations for every wallet, from ocean-front luxury high rises to campgrounds. There are two piers anchoring each end of a boardwalk. The pedestrian boardwalk is jam-packed with restaurants, shops, the Sky Wheel and other amusements. You'll also find a variety of live shows and kid-friendly activities like water parks, wax museum, miniature golf, and Ripley's Aquarium. 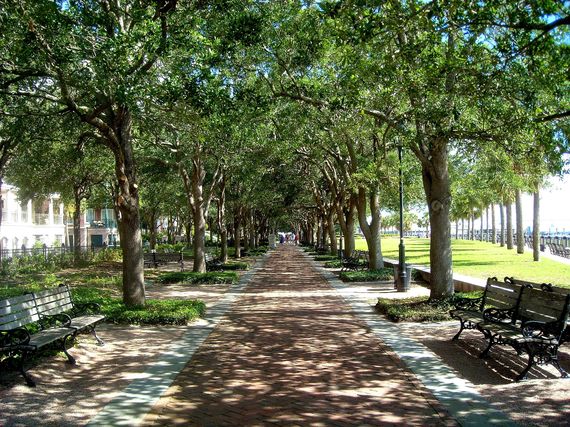 While not a typical beach town, Charleston, located on the Charleston Harbor, is the oldest and second-largest city in the U.S. state of South Carolina. You'd be hard-pressed to find a more charming and picturesque city anywhere in the United States. The stunning architecture includes Rainbow Row - the much-photographed row of mid-18th century pastel houses. Charleston has a rich history including Fort Sumter where the Civil War was started. The city is a foodies' delight with many acclaimed restaurants. There are beaches at Sullivan Island and Folly Beach are just a short drive away. 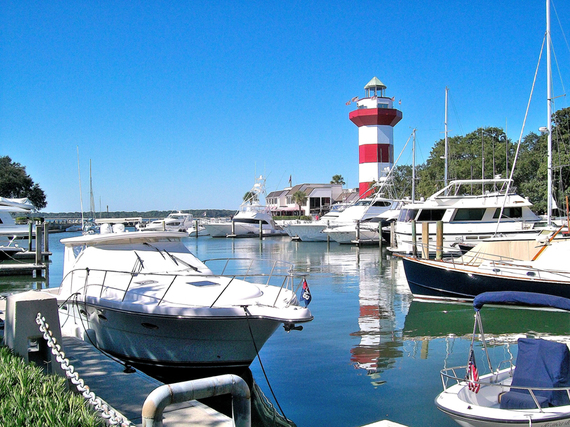 Hilton Head Island is a Lowcountry, boot-shaped island off the South Carolina coast. It's an upscale resort with 12 miles of pristine beaches, but is perhaps best known as a golfer's paradise with world-class golf courses. The island has exceptional restaurants, and activities run the gamut from high-energy water sports, kayaking, myriad bicycle paths and parks, shopping and festivals. 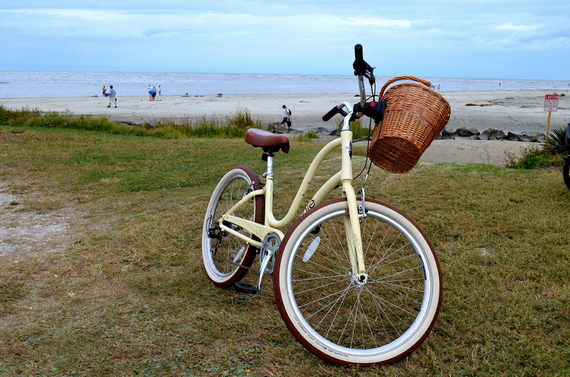 St. Simons Island, off the coast of Georgia, is 18 miles long and just a mile and a half wide. The landmass rests amicably on the Atlantic seaboard, beckoning visitors through its moss-dripping oaks. The island offers myriad activities, many of which are best seen by a bike ride through paved pathways and beaches. Historic sites include the 1742 Battle of Bloody Marsh, Christ Church, and the St. Simons Lighthouse. Quaint locally-owned and operated shopping and eateries can be found Pier Village, just steps away from the beach and fishing pier.

Stay: The King and Prince Golf and Beach Resort 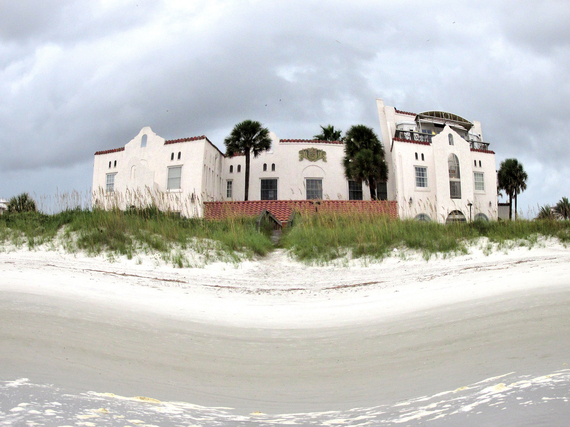 Jacksonville Beach is a relatively small beach community on Florida's northeast coast and a perfect destination for a "chill weekend." Try a chilly thrashing in the surfer-friendly waves or catch a sunrise on the pier. Spend an afternoon at the Beaches Museum and History Park where you'll find a restored 19th century house used by the Florida East Coast Railroad Section Foreman, an old railroad depot, a 28-ton steam locomotive built in 1887, and the Beaches Chapel - one of the oldest historical structures in Jacksonville Beach. Don't miss Zeta Brewery where you can sample IPA beers with names like with names like "Blueberry Lager" and "Habanero Sculpin." 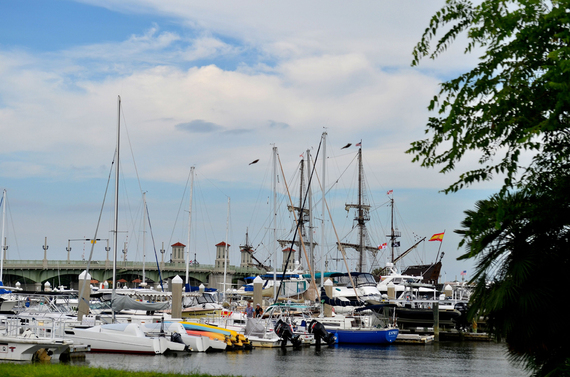 Proudly laying claim as America's oldest city, the historical and charming St. Augustine was founded in in 1565 and is also considered by many to be America's most romantic destination. The brick-lined streets are reminiscent of the old town districts of European cities. Horse-drawn carriages carry tourists past grand historical architecture. The pleasant winter subtropical climate and coastal location combine to create an alluring sunny environment. Step aboard the Old Town Trolley to wind around the historic downtown streets as well as see the historical sites such as the Old Jail, Flagler College, Castillo de San Marcos fort, landing site of Ponce de Leon, and other landmarks. 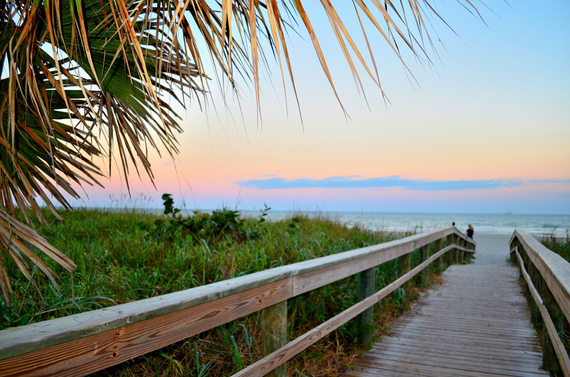 Just an hour's drive from Orlando on Florida's beautiful Space Coast, Cocoa Beach is a great location for an affordable family vacation. The beach is suitable for fishing, kayaking and eco-tours. There's the Kennedy Space Center as well as myriad of amusement in Orlando like Disney theme parks, the Universal theme parks, and Sea World. It's also close to Port Canaveral where you can jump aboard a cruise ship headed to the Caribbean. 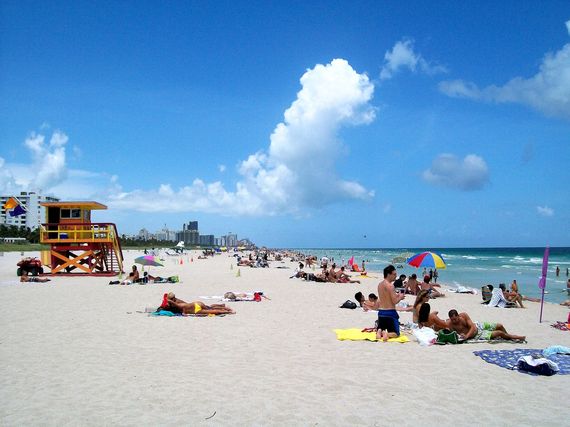 SOBE, or South Beach, is a beach destination known world-wide for beautiful weather, beautiful beaches and beautiful people. It's located on a barrier island between Biscayne Bay and the Atlantic Ocean off Florida's coast. High energy and sometimes raucous nightlife and topless sunbathing tend to make it more of an adult experience than a family vacation spot. End-to-end, the strip is teaming with Art Deco architecture, art galleries, boutique shops, and restaurants. South Beach has become known for the much-photographed colorful lifeguard huts constructed after Hurricane Andrew. 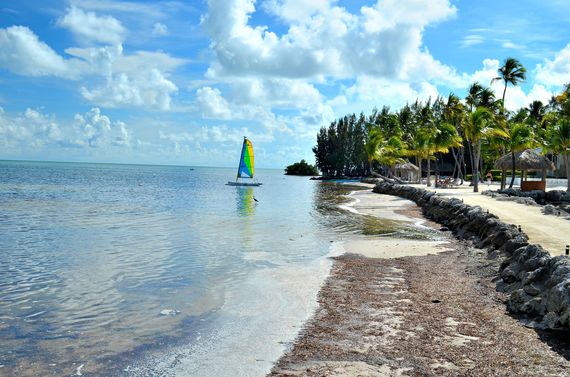 Islamorada, called the "Village of Islands" and the "Sport Fishing Capital of the World" consists of a series of small islands off the southern coast of Florida. Although not as well-known as its neighbors Key Largo to the north and Key West to the south, Islamorada is packed with a low-key charm that's hard to resist. With sunshine galore, Islamorada offers visitors activities under the aqua-blue water such as snorkeling and scuba diving in its beaches and in nearby John Pennekamp Coral Reef State where visitors can view the multitude of vibrant tropical fish, colorful reef, and underwater Christ sculpture. There are also a good variety of activities above the water such as world-class fishing for bonefish and sailfish or kayaking in the mangroves. Miami or Key West, each less than a 2 hr. drive, are popular day trips.