"Max's Kansas City was the exact place where Pop art and pop life came together in New York in the sixties," said Andy Warhol, who would know, and who in 1968 even moved his Factory downtown to be closer to the raucous Park Avenue South hangout. And while a Korean deli now fills the address that once housed the debauched after-hours shenanigans of artists like Robert Smithson and Carolee Schneemann, celebrities like Cary Grant and Mel Brooks, and musicians like Iggy Pop and Debbie Harry, the Max's legacy continues to thrill.

Visit ARTINFO to see a slideshow of images from the new catalogue, which describes the exploits of sundry artists, musicians, and other celebrities at the storied clubhouse. 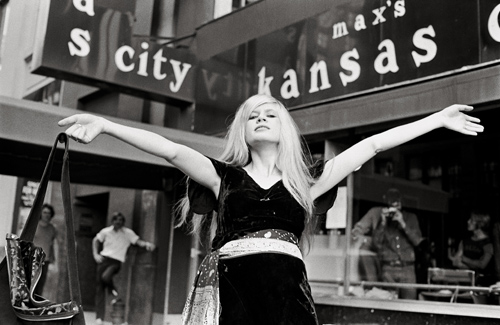 While today we may have one-off art-world gatherings that recall the bygone downtown vibe, we wax nostalgic about Max's Kansas City because we don't really have an equivalent. The book accompanying the show at Steven Kasher, published by Abrams Image, will only serve to rub in this deficiency -- although hearing about some of the sordid, drug-fueled mayhem that went down there takes away some of the myth's appeal.

Titled Max's Kansas City: Art, Glamour, Rock and Roll, the catalogue includes a number of texts -- including a 1974 interview between the owner, Mickey Ruskin, and Ramones manager Danny Fields -- but the main attraction is its wealth of photographs and odd blurbs documenting three decades of the art world.

Steven Watson writes in one essay that "deciding who came in was owner Mickey Ruskin's way of 'curating' people." The pieces of photographic ephemera and scribbled memories, only some of which are collected in this book, amount to the late Ruskin's grand exhibition. In honor of this achievement, ARTINFO perused Kasher's book to cull 11 things you didn't know about Max's. And boy, are they Grade-A juicy.