Like a lot of people who work in comics - or who just grew up in the second half of the twentieth century loving "funny books" - I was not surprised to learn that Dr. Frederic Wertham had, in his famous 1954 anti-comic book screed Seduction of the Innocent, "manipulated, overstated, compromised and fabricated evidence." On February 19, the New York Times reported this conclusion, reached by University of Illinois Assistant Professor Carol L. Tilley, who examined Wertham's papers at the Library of Congress.

Wielding his psychiatric credentials as a cudgel, Wertham used the media, including that nascent sector called television, to insist that comic books were inherently for children, and that adult content could, in fact did, warp young minds. Comic books like Crime Does Not Pay were intended to teach youngsters the methods of criminals and the glorification of murder. Horror comic books twisted young minds with scenes of violence and gore, while Batman and Wonder Woman encouraged homosexuality - after all, Bruce Wayne lived with a young boy, and Wonder Woman frolicked with her sisters on an island. And Superman, well, he was obviously the personification of the Nazi super-fascist - never mind that a couple of Jewish kids from Cleveland created him.

For the comic book industry, the 2013 exposure of Wertham comes a little late. Millions of comic books were sold monthly in the post-war '40s and early '50s, but that number dwindled drastically after the efforts of Wertham and other moral crusaders led to the creation (yes, in 1954) of the Comics Code Authority, a self-censoring board of comic book publishers. So restrictive were the guidelines - really, rules - that several of the top companies went out of business, including EC Comics (whose Tales from the Crypt, among other horror titles, were in particular Wertham whipping boys) and Lev Gleason Publications (Crime Does Not Pay, another Wertham favorite).

Wertham was even the star witness at a Senate Hearing on juvenile delinquency, in that same key year of 1954. Many lawmakers paid him heed, and in some states the words "crime" and "horror" were banned from comic-book covers. The irony is that many comics readers were not children.

When comic strips took off in newspapers in the early twentieth century, they were humorous if not always intended strictly for children - The Katzenjammer Kids, the Yellow Kid in Hogan's Alley, Mutt and Jeff - and the term "comics" became an accepted identifier of the form...even when story strips, often violent and with substantial adult readership, emerged in the late 1920s and early '30s, by way of Tarzan, Dick Tracy, Wash Tubbs and Terry and the Pirates. Even Little Orphan Annie depicted violent gun battles with gangsters. But the term "comics" stuck.

When comic books came along, as an offshoot of advertising giveaways reprinting newspaper comic strips, the term "funny book" emerged, unintentionally providing Wertham and his compatriots with an important tool. Today, most people understand that comics is a storytelling medium, as demonstrated by graphic novels by Will Eisner and Art Spieglman (and, if I may, my own Road to Perdition, drawn by Richard Piers Rayner). But in the 1950s, Wertham was able to gut the medium under the guise of protecting "funny book"-reading children. Was he sincere? Possibly. But as these recent revelations reveal, he was at worst a cynic seeking a fame-making cause, or at best a slovenly, dishonest researcher.

Research for my novel - also titled Seduction of the Innocent - turned up a Collier's magazine article (March 27, 1984) by Judith Crist (later a well-known film critic) describing Wertham's admirable work at a free Harlem clinic with underprivileged children, though illustrated with staged photos of middle-class suburban white children, imitating violent scenes from comic books. Wertham (like the Collier's article) conveniently failed to mention that his subjects were from an impoverished, racially downtrodden segment of society, blaming any juvenile delinquency on the comic books the subjects read. Statistics of the time indicate that almost every kid in America was reading comic books in the early '50s.

So were adults, who were the unspoken of victims of Wertham's crusade. GIs had learned to read comic books during World War II, picking up the colorful magazines at the PX; comic books, with their combination of text and pictures, were a blessing for semi-literate soldiers and for any warrior who wanted something easily portable to take into combat. Then Johnny came marching home - a comic book reader. College kids were a big audience for EC's sophisticated anti-war comics and science-fiction books that often included adaptations of Ray Bradbury stories. A generation learning to accept comics as a valid storytelling medium, alongside novels and movies, was snuffed out by a fiendish mad doctor right out of...the funny books.

As a kid growing up in the early '50s, I was well-aware of Dr. Wertham. Parents Magazine published a list every month of comic books that moms should forbid their little darlings from purchasing with a hard-won dime. I remember when Mad comics became Mad magazine - the success of which saved EC publisher William Gaines, and made him the Hugh Hefner of humor. I remember, too, seeing that hated white stamp of the Comics Code Authority on the cover of a comic book - I just knew the contents would be watered-down pap, and hated Wertham and his ilk for it. I was probably six. Whether comic books twisted me is another article altogether.

My novel is, I suppose, my revenge on the Wertham crowd. In my Nathan Heller historical novels, like the recent JFK thriller Target Lancer, I endeavor to use the private eye story as a means of climbing inside history, staying as close to reality as possible. But the Jack and Maggie Starr novels use history differently, as a backdrop and in a roman a clef fashion, to explore controversial corners of comics history. The style is Golden Age mystery - the era of Agatha Christie and Rex Stout - with a comics panel at the start of every chapter, and an Ellery Queen-style "challenge" to the reader before the final chapter, in the form of a comic-book sequence (by Phantom Sunday page artist, Terry Beatty). In this novel, the victim in the murder mystery is Dr. Werner Frederick, a pop psychiatrist who has taken on the horror and crime comics of his day.

I hope that Seduction of the Innocent - chiefly a comic (in several senses) murder mystery in early '50s Manhattan - is in part a cautionary tale. As tragedies unfold around us, we should recall that the comic books were once a pointless scapegoat in the McCarthy-era 1950s...and that seeking similar scapegoats in today's popular culture is just as pointless. 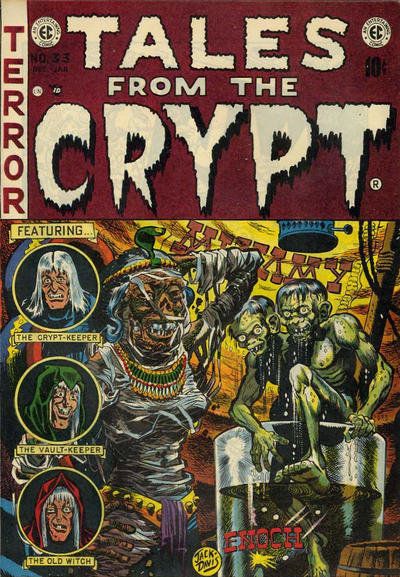 1 / 12
1. TALES FROM THE CRYPT
TALES FROM THE CRYPT, a prime “whipping boy” of Dr. Frederic Wertham, was the flagship of the EC line, a horror comic book that went kept topping itself in outrageous gore and black humor. Publisher William Gaines loved the old horror radio shows like Lights Out and Inner Sanctum. He and editor/writer Al Feldstein put together a top team of artists who could convey on paper the kinds of images radio listeners had conjured in their imaginations. Here is a typically grisly cover by the great Jack Davis, later a superstar cartoonist at Gaines’<em> Mad </em>magazine as well as a noted movie poster artist.