Take a helicopter, hot air balloon or scenic flight over Africa's desert, plains and thundering falls for unforgettable views of the iconic destinations. 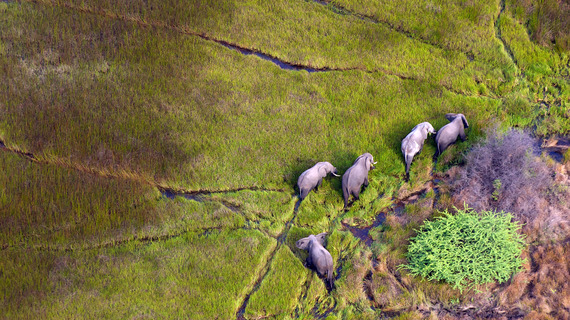 1. A Scenic Helicopter Ride over the Okavango Delta

Believed to be the world's largest inland delta, this region is flooded by the Okavango River each year, bringing an abundance of diverse wildlife to the area when the surrounding regions are in the midst of their dry season. Spot lions, cheetah, rhinos and giraffe, among many more majestic species, and between exploring on water and land safaris, see the delta from the skies by flying over this spectacle of nature on a helicopter tour.

When To Go June through October are the best months for game viewing. 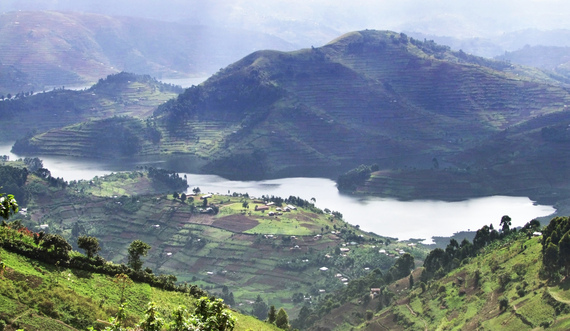 While many choose to see the mountain gorillas of Uganda and Rwanda, the neighboring nation of Congo has its own extraordinary appeal. Declared a UNESCO World Heritage Site, Virunga National Park is dedicated to the conservation of mountain gorillas, chimpanzees, forest elephants and okapi. Virunga also encompasses a chain of eight volcanoes, including Mount Nyiragongo - a volcano that's been continuously erupting for the last century - alongside the Rwenzori Mountains, which are the source of the Nile River. On multi-day helicopter tours see this landscape from the skies, with treks into the forest to seek out the region's famous wildlife species when you're back on solid ground.

When To Go June to September are the drier months, but the region can be visited throughout the year. 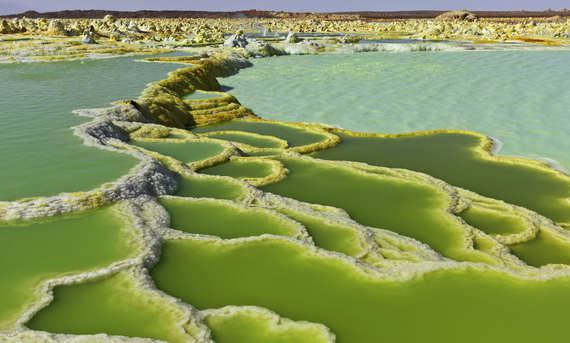 3. A Helicopter Tour through Ethiopia

With both mountains and lowland, Ethiopia has a number of ecologically distinct areas. Ethiopia's highest peaks, The Simiens, rise to a lofty 4,543 meters, while the salt pans and acid lakes of the Danakil Depression lie below sea level. On multi-day helicopter tours get a bird's-eye view of this spectacular landscape by flying from the capital Addis Ababa. Venture along the Blue Nile Gorge to Lalibela, a town that's known for its rock-cut churches, then by following the course of the Tekeze River, continue on to the majestic Simiens - home to endemic species like the Ethiopian wolf - and the Danakil Depression where you might catch sight of the nomadic people leading their camels across the land. Finally, witness the active volcano Erta Ale as it bubbles over with molten lava.

When To Go The rainy season runs from April to September but the country can be visited during any month. 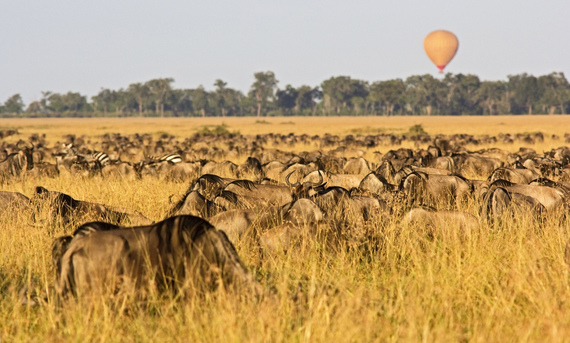 4. A Balloon Safari over the Maasai Mara

Set out early to reach your launch site before dawn, then rise into the skies as the sun comes up revealing the magnificent landscape below. The Maasai Mara is one of Africa's most famous safari destinations, due to the annual arrival of the Great Migration, in which more than two million wildebeest and zebra make their way north from Tanzania's Serengeti plains. Year-round though, there are ample wildlife sightings of the big mammal species as you drift silently over the forest and plains, while pods of hippos bask in the Mara and Talek Rivers.

When To Go Balloon flights are rewarding all year round, but go anytime from July to October if you want to witness the Great Migration. 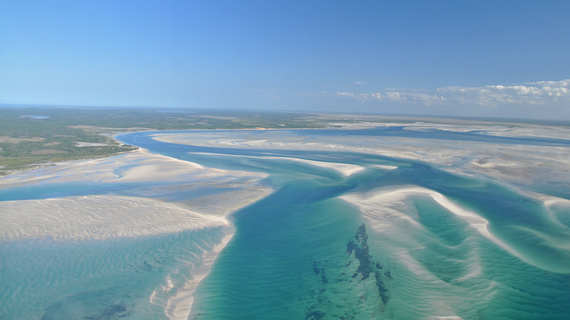 5. A Helicopter Flight to the Bazaruto Islands

Off the coast of Mozambique, archipelagos of white-sand coral islands lie in the crystal clear waters of the Indian Ocean. Of these groups of islands, the Bazaruto Archipelago offers ultimate seclusion in a pristine environment that's designated national park. Take a helicopter flight from the coastal town of Vilanculos out to Azura Benguerra Island to see the islands from above before reaching your luxury lodge.

When To Go Monsoons sometimes occur in February, March and April, but you can travel throughout the entire year. 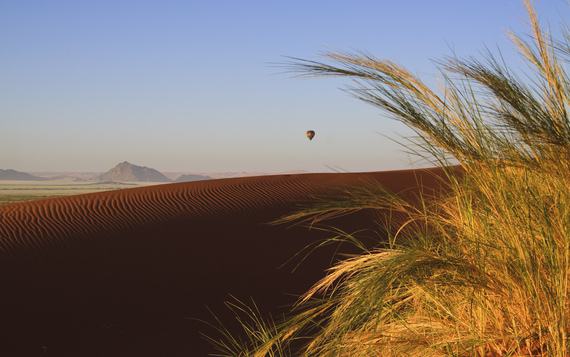 Across a staggering 50,000 square kilometers, Namib Naukluft National Park spans mountain ranges, deep canyons, and one of the world's oldest deserts, the Namib Desert. Sossusvlei is an expanse of golden rolling sand dunes within the greater desert area, where ancient acacia trees and roaming oryx are dotted throughout the land. Set off early to catch the sunrise as you float over this starkly beautiful landscape.

When To Go Balloon flights go out year round, with the exception of mid-January to mid-February when the heat is at its peak. 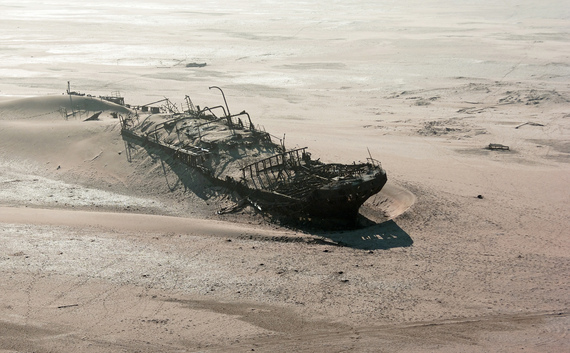 7. A Scenic Flight over the Skeleton Coast

One of the advantages of aerial safari is that is enables you to see places that are inaccessible by land. This is what makes a private flight over The Skeleton Coast so rewarding. The coastline took its name from the treacherous nature of its current that has resulted in shipwrecks along its shores, while further inland, shifting sand dunes contrast starkly with the vast salt pans, and desert oases dug by baboons and elephants support a unique ecosystem. Alongside these desert-adapted species, the nomadic Himba people continue to live on the land too, adding to the unique beauty of this region.

When To Go Travel is possible throughout the year. 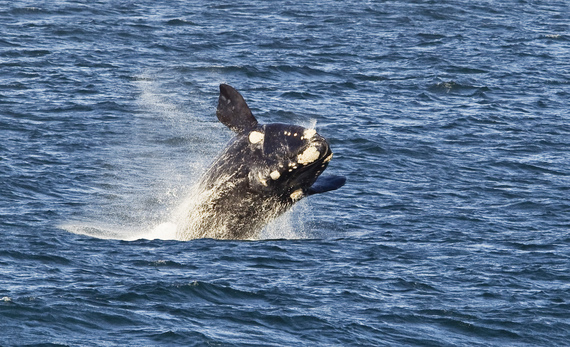 8. A Helicopter Flight over Hermanus Bay

Each year southern right whales migrate from Antarctica to the warmer waters of South Africa's coastline. The sheltered waters of Hermanus Bay are where these marine species are most easily seen, gaining the reputation as one of the world's best whale watching spots. Take the experience to another level by spotting whales on a scenic helicopter flight from Cape Town.

When To Go Visit between June and November to coincide with the whale watching season. 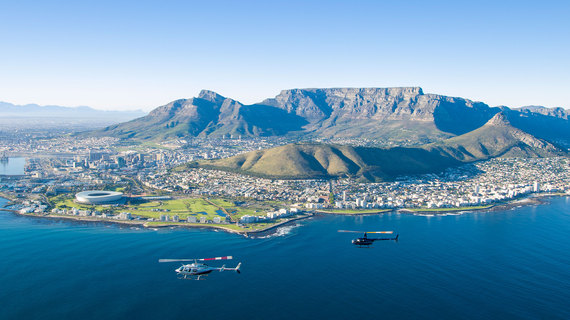 9. A Helicopter Flight over the Cape Peninsula

Take a scenic helicopter tour over the Cape Peninsula to catch sight of the region's landmarks from the air, including Table Mountain, Robben Island, and Cape Point Nature Reserve out to the dramatic Cape Point cliffs. Following the bays of this scenic coastline, the helicopter reaches the winelands around Constantia, before returning to the waterfront in Cape Town.

When To Go You can visit all year round. 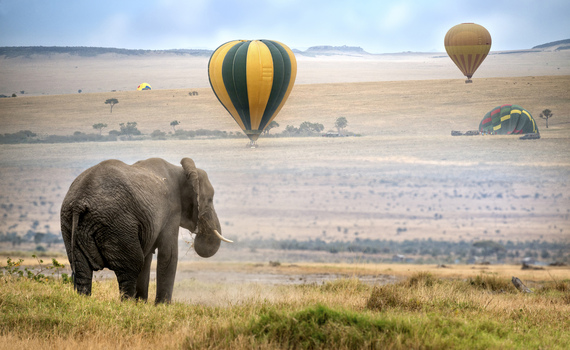 This vast UNESCO World Heritage national park is one of the world's most iconic spots for safari, in part due to the annual migration that passes through. Hundreds of thousands of wildebeest, zebra and gazelle stampede across the plains with their predators close behind. This also makes the park a popular spot for hot air balloon flights. Make your way to the launch site before first light to ascend into the skies for sunrise, then float over the savannah and woodland before landing to be treated to a Champagne toast and breakfast under an acacia tree.

When To Go Arrive between July and September if you want to catch sight of the migration. 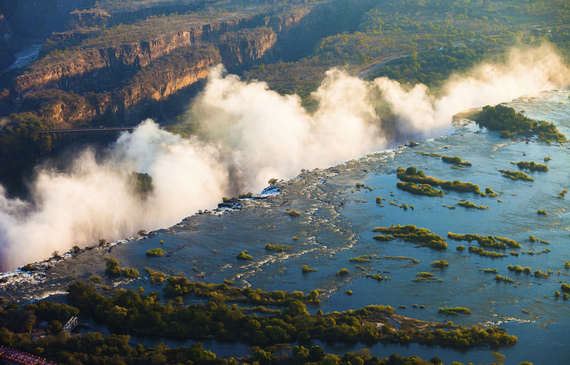 Known by many as 'The Smoke that Thunders', Victoria Falls is formed by the 1,700-metre wide Zambezi River tumbling over a 108-meter high cliff, casting a cloud of spray and rainbows into its periphery. Justifiably it has been named one of the world's seven natural wonders. The sheer enormity of the falls and Zambezi River can be seen from above by soaring over in a helicopter, a flight that's been named 'the flight of angels'.

When To Go Flights can be taken year round, with seasonal water levels transforming what you see. 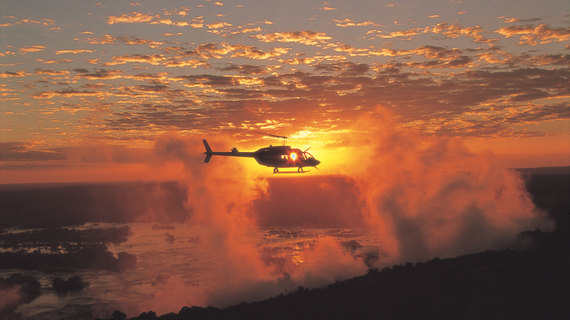 More:
BotswanaMozambiqueEthiopiaAfricanamibia
Newsletter Sign Up
An essential daily guide to achieving the good life
Subscribe to our lifestyle email.
Successfully Subscribed!
Realness delivered to your inbox