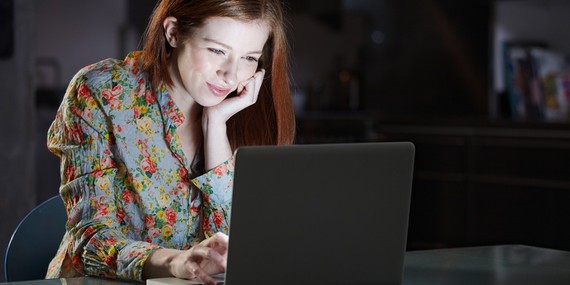 This story was written by Lauren Levine and posted on AskMen: Common Online Dating Mistakes

Gone are the days of having to rely on meeting your significant other at work or the gym. Now we're all swiping and clicking our way to true love. However, successfully using dating sites is both an art and a science, and it's left many guys unsure of how to proceed. In fact, a lot of well-meaning dudes are unknowingly driving potential matches insane as they try to get to know them better on dating apps and sites. If you want to increase your success rate on places like Tinder, Hinge, or OkCupid, avoid some of these common faux pas:

Writing a message that simply says "Hi"
It doesn't leave much room for conversation, plus it's too generic. We know you're copying and pasting this "blah" introduction over and over.

Asking why we're on this app/site
Online dating should be like Fight Club. We just don't talk about the fact that we're doing it. Obviously we've joined because we're single, not because we thought it was the Domino's app. Move on to other topics, such as shared interests, what we like to do around the city, etc. There's also no need to discuss the amount of "luck" we're having on the app or how long we've been using said app.

Listing your height and nothing else in your profile
Cool that you're 6'4", but when that's all you've told us about you it makes it hard to start a conversation. Also, contrary to popular belief, height isn't everything.

Listing no information at all in your profile
Favorite movies? Hobbies? Weird talents? Anything? Bueller?

Dropping in lines like "Hey gorgeous" or "Hey beautiful"
This just feels ick, even if you mean well.

Using old photos or relying only on group shots
Where's Waldo is an adorable series of children's books. It shouldn't be part of your dating strategy. Ditch that picture of you playing lacrosse in high school or the shot of you and your 20 closest friends in favor of a recent solo snap. Meeting strangers is unnerving enough. We want to be able to pick you out in a crowd.

Using profile pictures that feature you with a child
The strategy behind the idea makes sense. We see you with a kid and it sends a message to our brains that you'd be a great father, cue ovary explosion. However, in reality it just confuses us and gets us thinking about whether we're ready to be a stepmom. Skip the niece/nephew shots unless you make it explicitly clear that the kiddo isn't yours. Unless, of course, he/she is -- and then you should specify that.

Using your profile to list all of the traits you DON'T want in a partner
You don't want drama. You don't want someone who's clingy. It's okay to make your list of "must haves" known, but coming at it from a negative standpoint makes you seem aggressive. Instead, flip it around and frame it as a list of things you do want in a relationship. You want someone who's easygoing and independent. That's much more pleasant to read.

Answering a message in a way that doesn't promote further conversation
If we write to you and your reply doesn't include a question, it's a hint that you're not interested. If you want to keep chatting, make it a point to ask a follow-up question, or add in something that encourages further conversation.

Getting impatient if we take time to respond to a message
Much to our parents' dismay, finding a significant other isn't always our first priority. Guys who send an initial message, then immediately reply with "??" and then "why didn't you respond?" freak us out.

Throwing up red flags left and right
If your profile is all about how you just got out of a long relationship/your family forced you to join/you haven't had any luck on this site but you're trying again, don't be surprised when you don't get many interested matches. People want positive and open-minded, not someone who's on the rebound or is bitter about their situation.

Online dating instantly puts you in touch with hundreds of people you'd probably never meet otherwise. While this can be a lot to process, approaching the situation with positivity, a sense of humor, and a few updated pictures makes it easy to swipe your way to your next great relationship.

Women Fantasize About Their Exes Way More Than Men

How To Turn Friends With Benefits Into A Relationship