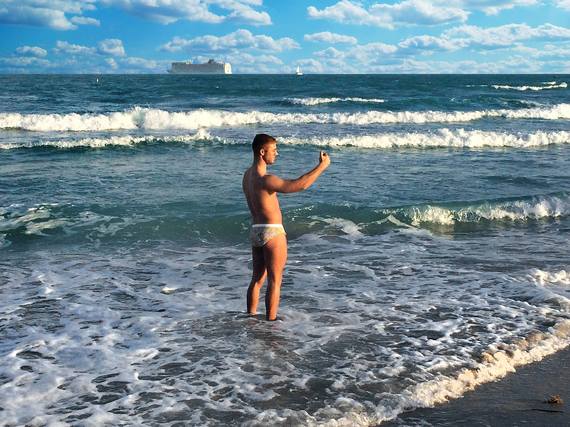 1. Because you're not interested in becoming a "piece of furniture." Too many men seek guys who fit their idea of a perfect partner: perfect job, perfect look, perfect friends, perfect for an Ikea ad. You want a guy who loves you for your individual nature, and who might even clash with some of your furniture. He's out there, so keep exploring new avenues, then give that home a makeover.

2. Because equal rights doesn't automatically equal rush to marriage. DOMA and gay marriages are making history, but there's no law that says you need to grab that guy you've been dating for a month and pick your Kelly Clarkson first dance song. For so many, the end of DOMA meant they could finally marry the man of their dreams. If you haven't met him yet, there's no need to settle down, despite what Mom says. Let the ones who are prepared eat cake.

3. Because you're not in a position to commit. Many things in life take precedence over a relationship: a job, finances, a drug or alcohol problem (his or yours), illness, the list goes on. You can't give all of yourself if your energy is needed elsewhere, and there's no reason to pretend otherwise. Nix the dating sites and spend quality time with the one who needs it most -- you.

4. Because you believe in love, not less. You've found that guy all your friends think is the perfect match. He's smart, successful, sexy and, even better, he wants you! If you move in with him, and/or get married, you'll be guaranteed a spot as Gay Couple of the Year, with fabulous Facebook photos to prove it. Problem is, you're not in love with the dude. That pisses you off, and you kept hoping your feelings would change. Sometimes that's the way non-love goes, and if you do take him up on his offer, a couple of years from now you'll be envied, admired and unbearably miserable.

5. Because he's unkind. He's got a body so amazing everyone steals it for their Grindr pics. He's fantastic in bed, a fit so good you want to lock him up forever. And the looks he gets from other guys should be criminal. Problem is, Hottie McPerfect is also sharing his Grindr pics with everyone else, his key's unlocked men all over town, and his lies about fidelity should be illegal. It's nice to indulge in a dreamboat, but if this guy is the Titanic of dates, get a lifeboat and jump ship.

6. Because you're just not that into monogamy, and he is. Or vice versa. The monogamy issue is a huge one in relationships, and if the two of you don't see eye to eye (or man to man) on "extras," pretending otherwise will only end up with someone getting hurt. Maybe in the future you'll arrive at a consensus, but until then he's the one you can't put into the equation.

7...Or children. Today, gay men want kids as much as straight guys, and it's often a first-date conversation. Don't lie simply because he also binge-watched your favorite TV shows and thinks your underwear choices are "adorbs." The "kid" question isn't going away, so if it's not part of you future plans, being a grown-up and telling him it's not going to work is the smart, if upsetting, course of action.

8. Because you just haven't met him yet. Social Media leads us to believe that the right guy is just a swipe or woof or OKDate away. And in today's gay-visible world you no longer have to shy away from approaching Bubble McGreatAss to ask for a coffee date. It's also easy to assume that, since you've been searching for your soul mate for 6 months and are still alone on Saturday nights, there must be something wrong with you. But meeting men has never been easy, no matter where you live or whatever your age or what you do for a living, and meeting a guy who makes your heart flutter just doesn't happen that often. Concentrate on, and love, yourself. That's your most attractive trait.

9. Because he's emotionally unavailable. This guy is the guy in so many ways it hurts. Gorgeous, sensitive, smart, with a connection so electric you can feel it across the room. Problem is, all he does is hurt you, even if it's unintentional. He can't be intimate without guilt, he's 12-step dependent, therapist-dependent, best-girlfriend-dependent, he drops out of the picture for days, then seems confused that you find ignoring messages unacceptable. When you confront him about anything, by the end of the conversation it's somehow your fault he forgot to invite you over for dinner with friends. This guy has so many issues he should be running for office. As much as you hate the thought of losing him, run away. Only when and if he gets help can the relationship be a two-way street.

10. Because you're not living in your parents' world anymore. You spent your childhood years stealing Big Sis's Cosmo Quizzes to figure out how to attract the perfect mate. You went to school in an environment that said love and marriage were the most important things in the world, and maybe going to college. And you learned in every movie and TV show from Sex and the City to Pretty Woman that getting the guy is the only ending that's happy. Despite the fact that your parents divorced, as did half of your friends, you're still reading countless articles telling you why it's wrong to be a single gay man. We're so much better than that, in a world where we can make our own decisions about love, marriage, dating and priorities. Single-shaming is subtle and ubiquitous and needs to stop. Being in a relationship can be wonderful and it can be hell on earth. And there's no one lonelier than the guy alone with someone else. Celebrate your single status just like you celebrate your relationship status. Both are equal rights to make you proud.

11. Because you prefer it that way. And there's nothing wrong with that.