Ever since I started Accint, an iPhone app that connects language learners with native speakers for in-person, paid conversations, I've pondered this question: What's easier than speaking your native language?

Now, finding an answer is harder than you might think. Slinkies, for example, can get tangled sometimes, and slides generally require first walking up a hill or set of steps first.

So here's a list of 11 things that might be thought of as easier than speaking a native language. After a discussion of each item, a verdict of 'easier', 'not easier', or 'equally easy' will be made. 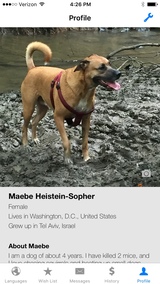 In sum, looking at a clear night sky, getting your dog to love you, and sweating in D.C. during the summer are the only things easier than speaking your native language.

But can you get paid to do those things?

Well, on Accint, you can set a rate for an hour-long, in-person conversation in your native language. There's no easier way to make an extra buck!