I think this heartwarming picture of our son marks the moment he realized that he was our first baby: 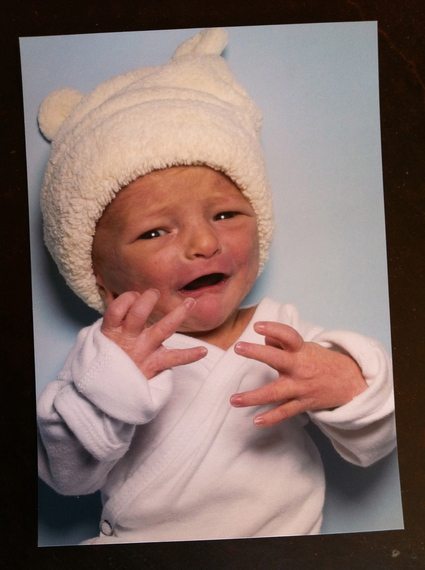 He was right. But our first baby just turned 8 and his little sister is 3. These are some of the things we have learned along the way:

1. We are amazingly creative if our sleep depends upon it. I have created, with my own two hands, a working Monster Catcher out of just twigs and rocks. I have also weaved detailed princess stories at 3 a.m. after a nightmare. I can also tell elaborate lies as to why the Tooth Fairy was absent or where their very important art project went (definitely not in the recycling bin).

2. We now know that our parenting well of patience is completely dependent on satisfying the first tier of Maslow's Hierarchy of Needs. Mostly the breathing, sleeping, eating parts.

3. Bribes and threats work surprisingly well. Before children, I may have thought that I would limit my use of bribes and threats, but nope, that's pretty much all I've got.

4. We will act like circus performers just to hear them laugh. These are just some of the ridiculous things that we have done with just the smallest amount of encouragement: unsuccessfully juggled eggs right before bedtime, burped "I love you" until we almost puked, thrown ourselves into a snowbank in December and read stories to them standing on a ladder while they sat on the roof of our house.

5. We are slowly becoming our parents, whether we like it or not. Recently, I was transported right back to a scene in 1980 with my own mother after I said, "If you tie that around your finger, you won't have a finger anymore."

6. I have learned to always, always, always have a snack with me. I have found that we can only love each other and talk in normal-pitched voices when we aren't starving, raving lunatics.

7. I have also learned that if you don't know what it is, don't smell it.

8. I have figured out that if I am consistent enough with parenting, after a while, I don't have to do that much. Sometimes, if I ask my daughter to pick up her toys, she says, "No." So I say, "OK, you don't have to." And then I just smile at her. Works every time.

9. My husband and I now know that we have to be a united front. Against them. If we fail at this one thing, they will take over and it will be all Minecraft all the time, followed by juice box shots and a candy wrapper mosh pit.

10. That new "stuff" is not the way to our kids' hearts. I think we knew this already, but the cranky truth of it slaps us in the face after every birthday. They are much happier mining art projects out of the recycling bin than they are playing with shiny new toys.

11. And, finally, we have learned that they are, in some ways, infinitely smarter than us. My son once said to me, "I searched all over for who would be my mom, and then I recognized you by your voice." I know, creepy.

Baby Photobombs
More:
parenting adviceparents-toddlersKidsMotherhoodParenting
Newsletter Sign Up
Raise the kind of person you'd like to know
Subscribe to our parenting newsletter.
Successfully Subscribed!
Realness delivered to your inbox