Growing up, we used to receive loads of holiday cards from family, friends and my dad's business associates. But the highlight every year was a photo card from cousins who lived on a farm in Pennsylvania. We rarely saw them in person, but we got to watch them grow up in annual photos, first with their adorable Basset Hounds, and eventually with their darling pig, Ruby. One year, when the kids were grown and far-flung, the card exclusively featured our swine cousin.

Once I had a gaggle of babies of my own, I decided to start the annual photo card tradition for our family. Early on, my husband thought it might be nice to send cards to his clients, many of whom were retirees and always asking about our young growing brood. The photo cards were an instant hit, and clients start asking in October when we were going to get our card out. They love to see how the four boys (three of whom are now in college) have grown, and it gives them a more personal connection to my husband.

Aside from the first couple of years when I used pictures of our whole family taken by friends, I've been the photographer, location scout and card designer. Not to say I'm a good photographer at all, but I enjoy using a camera and shooting my four favorite subjects.

Those four subjects, on the other hand, do not exactly share my enthusiasm for our shoots. When they were little, I could've used Velcro to hold them all in place. They would scurry in different directions and I had all I could to get the four of them in a shot, all looking toward the camera. We would always try to get the picture done during our summer trip to Nantucket, and our photo shoot provisions invariably included an enormous thermos of gin and tonic for my husband/assistant, whose job it was to get the attention of the four little monkeys and try to make them smile -- or at least not pound each other on camera.

The glorious moment captured on each year's card doesn't begin to do justice to the unbridled pandemonium behind the scenes. It's a given that one of the four is in a bad mood when we shoot, and they take turns rotating each year. They poke each other, elbow each other, kick each other, vie for what they perceive to be the prime spot. One won't want to stand next to a particular brother, sparking a fight. Another will whine because supposedly, the sun's in his eyes. No one else's, mind you, but it's absolutely blinding him. One year, a couple of them were having a battle over who was taller, and they would both sneakily lift themselves onto their tippy-toes and smirk. Someone's always having a bad hair day or isn't in the mood to smile or the shirt they really wanted to wear was rolled up in a ball in the laundry hamper with a big stain. It takes literally hundreds of shots to get one useable photo. But in the end, we all agree it's worth it to bring a smile to the faces of friends, family and clients, who appreciate the effort. And the outtakes, which range from hilarious to horrifying, end up being an unexpected gift to scroll through a few years later.

Having done our photo cards for 19 years now, I am, shall we say, rather opinionated about other people's cards. In fact, my sister and I set aside a special day every January to get together and go through all the cards we've each received, one by one. They start off as a way to share pictures -- "No way! Those kids belong to that guy from college who got drunk and threw up in your roommates skates?!" But they quickly turn into card evaluation sessions. "Um, why would they choose a picture of their kid picking his nose and riding the dog?" (Disclaimer: Not all the cards I've sent out are shining "DO" examples. I've had my share of "DON'Ts," although regardless of how frightful I now think they are, they were pretty good for the time and available technology.) 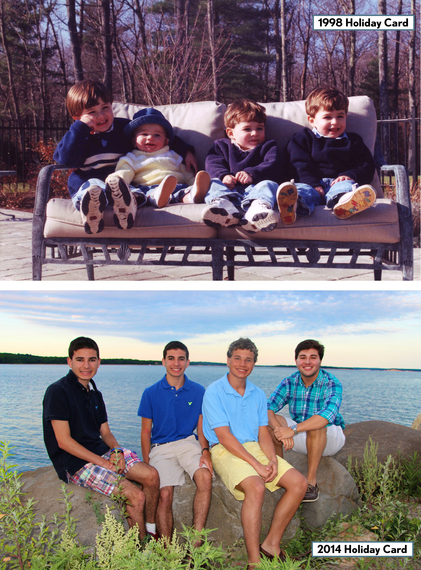 By and large, the cards I received last year were outstanding. My sister's extensive crop, on the other hand, featured some stellar DON'Ts. So, we thought it was high time we passed along some tips and suggestions to keep in mind when you're designing this year's card:

1. Use a nice, big picture! Your kids are beautiful. So beautiful, in fact, that we'd love to see one gorgeous photo of 'em on the front rather than 27 tiny action shots of them from a distance. Slap all those thumbnails on the back or on the inside if you absolutely must include them.

2. Don't compromise quality for setting. Your kids are beautiful. And that setting where you did your photo shoot was charming. But it made for crazy-a** shadows all over your kids' faces, and now we're sad. Don't be seduced into compromising the key feature of your photo for a lovely setting.

3. Let us see your faces. Your kids are beautiful. So is the Eiffel Tower. We get it -- you went to France this year -- but we'd rather see your delightful faces than your microscopic family silhouetted against the giant Paris landmark.

4. Don't include random people in your photo. Your kids are beautiful. Your newborn nephew is beautiful too. But please don't use that picture of your daughter holding him in your holiday card. Because we're made to believe you had another baby that we never heard about. And we have enough senior moments to begin with, we don't need extra ones to boot.

(Addendum: If you've got kids, don't sign your pet's name on the card unless she's in the picture, too. Because then we start counting kids and come up short and wonder who "Chloe" is. If you don't have kids, however, feel free to sign your card from you, Chuckles and Henry. And bonus points if you send a card of your pet taken by a professional photographer -- this was one of our favorite cards last year!)

5. Do some basic photo editing. Your kids are beautiful. The photo you chose was ridiculously dark, though, so we can't see how beautiful they are. If you can't find (or take) a better shot, don't you have some basic photo editing software to lighten it up a bit? Play around with those little slider buttons -- exposure and contrast can be your friends.

6. Make your greeting legible. Your kids are beautiful. And so is the photo you chose. But why did you pick a medication-warning-label-size type for your greeting?

7. Share at least a little family news. Your kids are beautiful. And also interesting we imagine! We'd love to hear a little bit about what you're all up to, or at the very least how old they are. If one of our friends can hand-write lengthy personal notes on the dozens and dozens (hundreds?) of cards she sends, surely you can stick a short preprinted 8-1/2" x 11" note in the envelope or, even easier, print something right on the card itself.

8. Skip the artsy stuff. Your kids are beautiful. Or so we assume. Because you sent a photo of them from behind as they were wading into the water at a beach. They're not that scary from the front, are they? And that's not the only picture you took of them in the last 365 days, now, is it?

9. Use a good quality photo. Your kids are beautiful. So why would you spend all that money on a swanky card but blow up a low-resolution cell phone shot that makes them look all grainy? Remember: there's clear and there's Claritin clear.

10. Be timely. Yes, life is busy, but c'mon -- the six full weeks between Thanksgiving 'til just after New Years is a big enough window to get your card out. Last year, my sister received a card on February 3rd! That's not a holiday card unless the holiday is Valentine's Day.

11. Pluralize correctly! Listen carefully now: Adding an apostrophe + an "s" to your last name does not -- we repeat, DOES NOT -- make it plural! Trust us. If the card is from your whole family, simply shove an "s" on there (The Smiths) or an "es" if your last name ends in an "s" (The Joneses). Save the apostrophe for another (grammatically correct) use. And if you can't remember that rule, just play it safe and sign it from "The [Your Name Here] Family." (A public service announcement from the Bureau of Misused Apostrophes!)

What are some of your holiday card pet peeves?

Moms Don’t 'Deserve' Wine. We Deserve Better Than This.

How To Make A Smoothie That'll Keep You Full For Longer