Adapted from The 4-Hour Body: An Uncommon Guide to Rapid Fat-Loss, Incredible Sex, and Becoming Superhuman

"God, what a beautiful beach. Calm. Nice translucent turquoise water. I should really go back to Thailand. I wonder what time it is in Thailand. But... why is there a mangy German Shepherd on my beach? Orange collar. That makes no sense. Kind of looks like John's dog. Actually, I owe John a call. F*ck. Did I put his birthday party in the calendar? Birthdays and clowns. Clowns?! Why the hell am I thinking about clowns???"

And so my internal dialogues continues until 3, 4, or even 6 a.m., rotating through images, ideas, commitments, anxieties and fantasies.

So, in the interest of finally getting a good night's rest and helping others with insomnia, I tried it all. And I measured. A lot.

It paid off. I can now say that I had insomnia.

The Hidden Third of Life
Is good sleep a simple matter of length, the longer the better? If you've ever needed a nap after sleeping too much, you know it isn't that simple. Let's examine the problem through an easier question to answer: what is bad sleep?

For me, the problem with improving sleep was being unable to measure it. I could record the time when I got into bed and when I woke up, but I couldn't pinpoint when I fell asleep, much less what happened while I was asleep.

The problem with testing these in a proper sleep lab (the test is called a polysomnogram) is that you generally have at least 22 wires attached to you to measure brain activity (EEG), eye movements (EOG), skeletal muscle activation (EMG), heart rhythm (ECG), respiration, and sometimes peripheral pulse oximetry.

Guess what? No one can sleep in a weird lab with 22 wires attached to them on the first night. So the data are terrible. Then they come in the second night after an effective all-nighter and crash like heroin addicts. Double bad data.

Alas, I would need a pocket-sized sleep lab to test them under realistic sleeping conditions, and I was able to do this recently using the Zeo brain-tracking device, video recording of sleep movements, accelerometers, and more.

Here are some of the most important initial findings, ranking sleep from 1-10, 10 being most restful:

1. 8-10 sleep was most dependent on the ratio of REM-to-total sleep, not total REM duration.

The higher the percentage of REM sleep, the more restful the sleep. The higher the REM percent, the better the recall of skills or data acquired in the previous 24 hours. Higher percent REM sleep also correlated to lower average pulse and temperature upon waking. Based on available studies, I expected deep wave to affect the latter two, but the correlation was erratic.

2. I could increase REM percent by extending total sleep time past 9 hours or waking for 5 minutes at approximately 4.5 hours after sleep onset.

Short wakings of 5-10 minutes, particularly one additional waking approximately 6.5 hours after sleep onset, dramatically increased REM percent. It turns out that waking is not necessarily a bad thing, at least when intentional.

Huperzine-A, an extract of huperzia serrata, slows the breakdown of the neurotransmitter acetylcholine ( ). It is a popular nootropic (smart drug), and I have used it in the past to accelerate learning and increase the incidence of lucid dreaming. The increased REM seemingly caused by huperzine-A could explain the increased retention some experience with it. I no longer use huperzine-A except for the first several weeks of language acquisition, no more than three days per week to avoid side-effects, and I do not recommend using it unless you do your homework. Inhibition in the human body usually triggers compensation -- and often delayed side-effects -- somewhere else. The brain is a sensitive instrument, and this drug is contraindicated with a fair number of medications.

Even four glasses six hours beforehand did not appear to have this effect. Conversely, taking 15+ drops of California Poppy extract appeared to increase deep wave sleep up to 20 percent.

5. Having two tablespoons of organic almond butter (or peanut butter) on celery sticks before bed eliminated at least 50 percent of "feel like shit" 1-3 awakenings.

Ever wonder how you can sleep 8-10 hours and feel tired? Often the culprit is low blood sugar. Make a pre-bed snack part of your nutritional program.

1-2 tablespoons of flaxseed oil (120-240 calories) can be used in combination with the above to further increase cell repair during sleep and thus decrease fatigue. It tastes like a mixture of cat urine and asparagus, so I recommend pinching your nose while consuming it per Dr. Seth Roberts.

The most important thing, of course, is getting to sleep in the first place. No matter how theoretically restful my sleep should be based on Zeo results, more than 30 minutes of onset insomnia negated it all.

Here are the changes and tools that had the largest and most predictable effects. Some will no doubt be more convenient than others. I excluded drugs from testing to avoid both side-effects and dependencies:

This was the variable I most experimented with while in Nicaragua for my medical tourism adventure (another story -- I used one hospital trip to pay for a beach vacation), and it was also the variable that had the most consistent effects. Specifically, using a single bed sheet, 67-70-degrees Fahrenheit produced the fastest time to sleep. Warmer temperatures never worked, but as low as 65 would work equally well if I wore socks to keep my feet warm. If you can't control the ambient temperature, testing socks of different thicknesses is the easiest variable to change for tweaking heat loss. No joke.

Ideal temperature is highly individual and a narrow range, so experiment with precise controls.

7. Large fat and protein-dominant meal within 3 hours of sleep

Consumed within 3 hours of bedtime, meals of at least 800mg cholesterol (4 or more large whole eggs) and 40 grams of protein total produced dramatically faster time-to-sleep scores than meals of lower volume or lower protein and fat. Eating two rib-eye steaks, each about ¾ pounds, had the strongest tranquilizer-like effect.

I bought this travel-sized blue-light() emitter for a friend who suffers from seasonal affective disorder (SAD) -- a.k.a. mild to severe depression -- during winter months. It turned out he already had the same device, so I began to use it as a replacement for coffee first thing in the morning. I set it to the side of my laptop, pointing at me at a 15-degree angle for 15 minutes. That evening, my time to sleep was less than 10 minutes for the first time in a week. I was able to replicate the effect 4 nights out of 5.

Though most often used for jet lag or winter depression, the goLITE has been singularly most useful as a corrective sleep tool, even if I wake up late and go to be earlier than usual. Battery life is long and it is, at the size of a small square book, portable enough to take in a carry-on bag.

9. Cold bath one hour prior to bed

The Japanese have longer average lifespans than most other ethnicities, including Americans, whom they beat by more than four years(). One hypothesis researchers have forwarded is that regular ofuro -- hot baths at bedtime -- increase melatonin release and that this is the mechanism for life extension.

It seemed that the ofuro effect might be related to the subsequent rapid cooling, and not eager to kill my swimmies with hot baths, I opted for the opposite and went direct: cold.

I tested the effect of combining shorter-than-usual 10-minute ice baths one hour prior to bed, timed with a countdown kitchen timer, with low-dose melatonin (1.5 - 3 mg) on regulating both sleep regularity and speed to sleep. The icebath is simple: 2-3 bags of ice from a convenience store ($3-6 USD) put into a half-full bath until the ice is about 80 percent melted. Beginners should start with immersing the lower body only and progress to spending the second five minutes with the upper torso submerged (fold your legs Indian-style at the end of the tub if you don't have room).

The result: it's like getting hit with an elephant tranquilizer, even if the melatonin is omitted. Don't expect it to be pleasant at first.

The Nightwave was introduced to me by a good friend named Michael with even worse onset insomnia than mine, which is hard to imagine.

He is not prone to ranting and raving, and he had begun ranting and raving about how he'd found a permanent fix to his sleep problems. It was the Nightwave, a slow-pulsing light the size of a cigarette pack that now helped him get to sleep in less than 7 minutes. Dr. James B. Maas, Weiss Presidential Fellow and Professor of Psychology at Cornell University, is one of several researchers who have endorsed the device.

It does work often, but I found it less consistent than Michael did (his hit rate was near 100 percent). I now travel with the Nightwave but use it is a supplement to the goLITE when needed.

This was, along with the socks (foot warming) recommendation, a result of polling more than 70,000 Twitter followers for successful treatments for onset insomnia.

To echo Animal House, here's how you assume the position. Lie on your chest with your head on a pillow and facing to the right. Both arms should be straight by your sides, palms up. Now bring your right arm up until the top of your right hand is under your pillow and under your head. Next bring your right knee out to that side until it is bent at approximately 90 degrees.

This is a last-ditch resort that works for one simple reason: you can't move. It's like a self-imposed papoose, which the Inuits and other cultures have used to prevent infants from moving, which calms them. To toss and turn from the half military crawl position, you have to first lifting your entire body off the bed. Less fidgeting results in faster sleep. 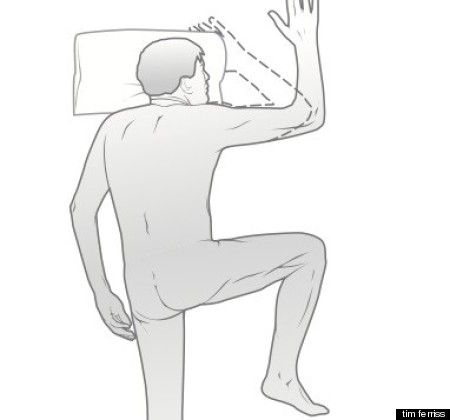 Adapted from The 4-Hour Body: An Uncommon Guide to Rapid Fat-Loss, Incredible Sex, and Becoming Superhuman Copyright © 2010 by Tim Ferriss. Published by Crown Archetype, a division of Random House, Inc.