Which is kind of the deal with kids, too.

They may not be universally reviled (emphasis on may not be); it's a lot easier to laugh at their antics when they're not yours. And the similarities don't stop there.

1. They'll say anything to get your approval. Just about every other time my son tells me he loves me, it's followed by a request for something.

2. They're the biggest flip-floppers in the world. No one changes their mind like a child. Mine just threw a fit because I wouldn't let him watch TV and now he refuses to watch TV because... I don't even know why. And neither does he. He's gonna be president!

3. They'll do anything to prevent their enemies from succeeding. You think House of Cards is dark? You should see my son's preschool. They've already driven out four teachers.

4. They make promises they can't keep. Every time I try to get my son to do something, he tells me he'll do it tomorrow. Actually, he says "next day" because he doesn't use the word "tomorrow." Regardless, it never happens "next day." I'm lucky if it happens next life.

5. They can filibuster like nobody's business. My son has literally been talking about Rescue Bots for 25 minutes straight. Make that 26.

6. They love to negotiate. (And they're pretty terrible at it.) I can't remember the last meal that didn't start with my son attempting to get us to let him skip his vegetables and didn't end with all three of us yelling at each other while nothing got accomplished. Just like Congress!

7. Bribery always works. Whether you want to get a bill passed or get some broccoli eaten, sweeten the pot and they'll eventually come through. Eventually.

8. They shoot your budget to hell. Give a child a calculator and a checkbook and he has about an equal chance of balancing a budget as the members of Congress. Judging by how little my son likes school, they'd probably spend the same amount on education.

9. They get you all excited at first, but four years in, it's an absolute nightmare. I once believed in a place called Hope. But lately things have gotten so rough, I just wish I could go there. By myself!

10. The person you think you're getting bears no resemblance to the person you actually end up with. When this whole thing started, I thought I knew what I was in for: someone with similar interests and values. What I ended up with is a selfish, petulant nincompoop with no conscience and a penchant for lying.

11. They're all pretty much the same. Not mine, though. He's special. Things are going to be different with him, I can tell.

I could go on and on; the similarities are endless. Thankfully, my 4-year-old has yet to say anything offensively stupid about rape. But other than that, I can't think of a major differ--

What's the difference between politicians and children? Children are smarter. 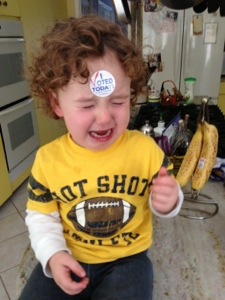