There has been a lot of talk of doom and gloom around specific dates, lately 11/11/11 through 12/21/12. Most of it is fear-driven by the media. However, people have been saying for thousands of years that the world is going to end and yet we are still here. So, I was interested to look deeper into the significance of 11/11/11 and moving into this New Year, from both a spiritual and scientific perspective. I interviewed a few experts and was pleased to learn it is a time that can be used for positive change personally and universally

It started when I attended a world healing meditation ceremony on 11/11/11 held by "The Spiritual Unity Movement." The guest speaker was Ron Wescott, who spoke about opening the 11/11/11 portal.

I took my seat outside the large ring of the Medicine Wheel Mandala. Which are large beautiful mandalas made of crystals, and copper. According to Diane Stein, author of "Essential Reiki," the mandala form in Tantric art presents the All-One and the All-Many. It symbolizes the enlightenment process. The word itself means to have a attained perfect and unsurpassable illumination. "Manda" is essence and "La" is completion' After a meditation for personal and universal healing, more than 250 participants entered the Medicine Wheel in groups of 12. People who passed through reported feeling a great sense of healing and completion. I also experienced the uplifting healing energy which emanated from it.

Afterward, I interviewed Mr. Wescott, who is an energy worker, lecturer and multi-dimensional teacher.

Wescott: The significance of 11/11 is polarity. An 11, which can be a 2, for feminine activation, and a 2, which is a 22, a master number. What's happening at the portal of 11/11 is it represents (a keystone for the consciousness of humanity and all living things) that for the first time in approximately 13,000 years, it is said that the Earth is entering into the age of light, the Golden Age. The golden photon-rays from the central sun of our galaxy are in direct alignment with the Earth. Photon rays break down into duality of both (negative and positive charges) this occurs when photon pass through the third layer of ozone.

In 1987, during the much discussed time of the harmonic convergence, the Earth began to slow down its rotation. We have all heard about the global warming of the Earth. The ozone layers at the north and south poles have opened up due to the Earth's changes in rotation, opening the third layer of ozone. It is believed this phenomenon has allowed the golden photon rays to come directly from the central sun into our atmosphere as single androgynous rays and to affect us at a very high level of energy, thus altering our consciousness. It was reported that these photon rays had been seen in the 90s. The people who reported seeing these golden rays said that they had witnessed golden rods which passed through the air and then disappeared into the earth.

All these golden rods have been going into the Earth at meridians, like acupuncture points. All these little needles of photon have been penetrating the earth. As they reach the core they change frequency and vibrate, which has been warming up the earth. These changes are due to the incubation of the Earth at the higher vibration of 11/11 frequencies. It is said that we are now in what is known as the age of light.

This is what is called The Golden Age, the Age of Aquarius. We are going into the final spin of the Mayan calendar into 12/21/12.

How can people apply the benefits of this higher vibration in their daily lives?

Humanity may benefit by finding peace through looking deep within themselves and to set up guideposts of visualization. Dream and know that your dreams are going to be realized through love, because love is what attracts protons and neutrons and that becomes attached to matter and creates a nucleus to create a molecule and that creates a form. Through the energy of love your "intention" manifests forms in your life. Be aware of the light that is around you. View all of God's creation in a new light. Be open to the possibility you are receiving a coded vibration of refined light directly from the central sun to your heart.

Next, Reverend Patrick J. Harbula, President of Spiritual Unity Movement and co-founder of Meditation Magazine, explains how we can help create an even more positive effect from the higher powerful energies...

So what can we do to support the most positive outcome for the influx of these new high vibratory frequencies?

Harbula: Most importantly, we can join in united spiritual intention, prayer, meditation and sacred ceremony. All of the sacred alignments (solstice, equinox and full moons) as well as specific dates, Nov. 11 (11/11/11) leading up to the 2012 date are crucial opportunities to direct the incoming higher frequency energies. We also encourage you to take united spiritual intention a step further and link up with positive intention at noon each day wherever you are. See and feel yourself and everyone as a radiant sacred center of light and love. There are tens or hundreds of thousands of people meeting in mind each day with a positive intention of some kind. What would be the transformational effects if this became millions? Hundreds of millions? If you are willing to make an even more consistent commitment to personal and planetary growth, link up every hour on the hour (or as often as you can remember) with a positive intention for the planet and all that is. Imagine the results when hundreds of millions are committed to this practice.

In your ceremonies, meditations and prayers, visualize a world of peace where people everywhere are committed to support one another and live in harmony with the planet and nature.

Those of us who were born at this time in history and who can envision a world of peace, joy and freedom, are being called to participate in the rebirthing of the sacred. Let's join in our daily activities and our group interactions to usher in a new era of love, light and spiritual freedom. I look forward to joining with you through the energetic grid of which we are all a part.

For more information on Ron Wescott and the Medicine Wheel Mandalas with many interesting pictures of these transformational tools, please visit, MedicineWheelMandala.com.

Reverend Patrick J. Harbula is a spiritual life coach, author of 'The Magic of the Soul,' o-founder of Meditation Magazine, Director of the Living Purpose Institute and President of Spiritual Unity Movement in California, which is about celebrating the spiritual unity of all life and raising the consciousness of light and love through community meditation and education and to inspire and empower those who attend the World Healing Meditation Ceremonies and all of humanity with the life transforming experience of Healing, Oneness, and Unity. For more information: SpiritualUnityMovement.org LivingPurposeInstitute.com 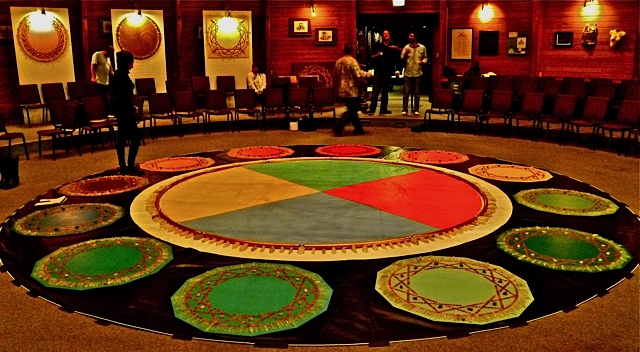