The harsh news first came as an oddball ploy. I thought the teacher had invented the story to manipulate my classmates and me into appreciating history as something more than irrelevant facts and dates. He was an imaginative educator and relished making the past come alive for self-absorbed adolescents. I did not stop then to consider how unkind a pedagogical ruse that would be. So, okay, the president has been shot.

I was sitting in a prefab annex, a temporary classroom, one other way my junior high school coped with a tsunami of baby boomers overwhelming facilities. The feeble annex typically felt too hot or cold. On that late November day, I felt chilled and still wore my winter coat. Our teacher had been interrupted from his lecture for a secretive conversation outside. He returned momentarily, his shoulders sunken, worry crossing his otherwise composed face. President Kennedy has been shot in Dallas; the president's status remains unclear. No... this is not a teaching scheme; this is real and irreconcilable.

As chatter crisscrossed the room, he asked for order. In this American History class, he had much to share about the farsighted men who first filled the nation's highest offices. A young and inspired educator, he wanted us to learn and appreciate. I cannot recall what he told us during those suspenseful minutes following breaking news, but even then I grasped the irony of an assassination attempt in Dallas while learning about the nation's Founding Fathers.

Before the period ended, someone again summoned our teacher. Juvenile cynicism also left the room. As minutes passed, it seemed that he had abandoned us, and prattle among students raised unanswered questions and uncommon concerns.

Our teacher returned, this time informing us that President Kennedy had been murdered. Laboring to steady his emotions, his eyes filled with tears, a momentous instant because never before had I seen any of my teachers display unbridled sadness, especially a man. That memory haunts me to this day because back then we thought of our teachers as greater than human -- strong, resolute, wise... authority figures, duly feared and/or respected. Tears had no place in a 1963 classroom.

American History ended, and, bewildered, I trudged to my art class, overseen by a stern matron who shared little of herself. Unlike my American History teacher, this hardened educator did not outwardly embrace the gravity of the day's news, but she did allow a small black-and-white television into her classroom, another major break in protocol. She instructed us to work quietly on our assigned art projects while we listened to unraveling news about a catastrophe in Texas. Try to be creative, she said.

Following my final class on that gray Friday, I raced home to a weekend dominated by television and waking hours spent absorbing the news along with neighborhood playmates. My emotions skittered from fascination to anger and despondency to excitement. Though barely age fourteen, part of me understood that I was witnessing history, not just learning about it. I watched in real time as nightclub owner Jack Ruby shot accused assassin Lee Harvey Oswald -- the unexpected stun of a pistol blast and raw astonishment washing over nearby cops and journalists--the only time I have witnessed gun violence play out on live television. 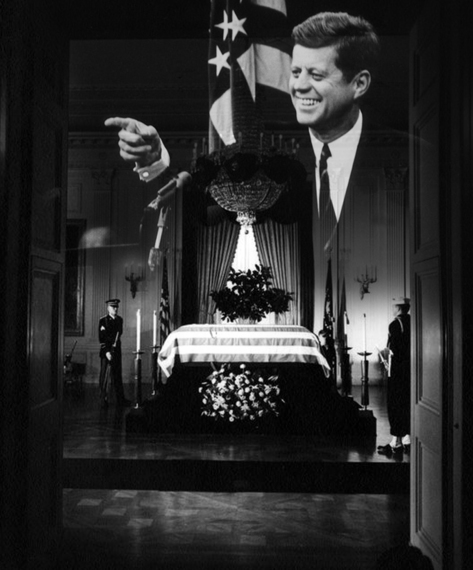 A long weekend and national day of mourning lingered, and I experienced irrevocable loss of a personal hero who had inspired me to think beyond the boundaries of that time and place. His youthfulness, charisma, and energetic family had become my benchmarks for civic engagement, not just theoretical abstractions that we studied about in history books.

A national psychodrama unfolded through the fantasy delivery medium of broadcast television--where Saturday morning cartoons, western movies, and charming family sitcoms such as Father Knows Besttypically filled weekends. But this was an epochal televised experience; this was not make-believe.

President John F. Kennedy's death and its aftermath became intractable memories rendered in black and white. His demise darkened who I was then and inexorably adds shading to this present moment.