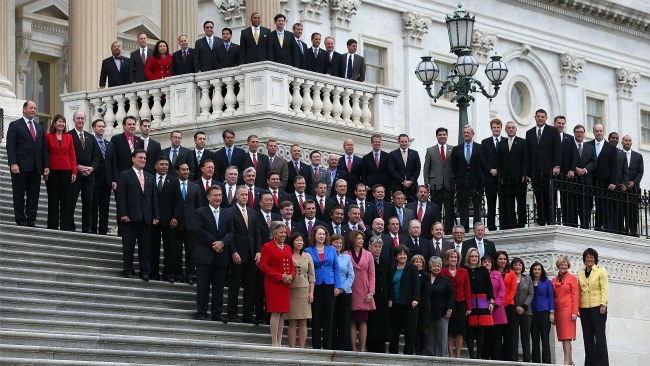 Since the 113 Congress officially opened for business in January, the Congressional Research Service (CRS), a public policy research arm of the United States Congress, recently issued a statistical breakdown on the new congress, covering everything from gender, religion, education, military service, and foreign birth.

We can all rest easy knowing that if members of Congress go after each other's throats during these heated sequestration talks, that there are 5 Peace Corps volunteers in the House who might be able to restore a sense of calm during the stormy sea of discontent. Even if peace and tranquility isn't in the cards, no reason to fear, because the 113th Congress comes equipped with 3 sheriffs, 1 deputy sheriff, 2 FBI agents, and even a firefighter in the Senate for all the fire breathers in need of being hosed down.

It's also comforting to know that if any members of the 113 Congress should suddenly take ill; there are 2 physicians in the Senate, 17 physicians in the House, 1 psychiatrist; and 3 psychologists all of whom purportedly will make House calls.

And according to the CRS report, even if the 113th Congress accomplishes nothing of importance to email or text home about, at least they'll be fully entertained. After all, the current Congress is comprised of a screenwriter, a comedian, a documentary film maker, 5 radio talk show hosts, 6 radio or television broadcasters, and a public television producer.

Here, then, is a statistical rundown of the 113th Congress:

• As of February, 2013, there are 232 Republicans, 206 Democrats (including 5 Delegates and the Resident Commissioner), and 3 vacant seats in the House of Representatives. The Senate has 45 Republicans, 55 Democrats, and 2 Independents, who caucus with the Democrats

• 43 African Americans will serve in the House and 2 in the Senate. This House number includes 2 Delegates.

• A record number 38 Hispanic or Latino members are represented in the 113th Congress: 34 in the House, including 1 Delegate and the Resident Commissioner, and 4 in the Senate.

Other professions represented in the 113th Congress, include:

• 102 educators, employed as teachers, professors, instructors, school fundraisers, counselors, administrators, or coaches (90 in the House, 12 in the Senate).

• 5 ordained ministers, all in the House.

• 5 Peace Corps volunteers, all in the House.

• 3 sheriffs and 1 deputy sheriff, 2 FBI agents (all in the House), and a firefighter in the Senate.

• 2 physicists, 6 engineers, and 1 microbiologist (all in the House, with the exception of 1 Senator who is an engineer); 33 former mayors (24 in the House, 9 in the Senate.

• 9 accountants in the House and 2 in the Senate

• 5 software company executives, all in the House.

• 1 screenwriter, 1 comedian, and 1 documentary film maker, all in the Senate, and 1 professional football player, in the House.

• 7 social workers in the House and 2 in the Senate.

Education
• Roll Call Member profiles at the beginning of the 113th Congress, reported 21 members of the House and 1 Senator have no educational degree beyond a high school diploma.

• 7 Members of the House have associate's degrees as their highest degree, and 1 House Member has an L.P.N. (nursing) degree.

• 85 members of the House and 14 Senators earned a master's degree as their highest education degree.

• 22 Members of the House and 3 Senators have a medical degree.

• 3 Representatives and one Senator in the 113th Congress are graduates of the U.S. Military Academy and 1 Senator and 1 Representative graduated from the U.S. Naval Academy.

Religion
• Statistics gathered by the Pew Forum on Religion and Public Life, report that 98 percent of the Members of the 113th Congress cite a specific religious affiliation, with the vast majority being Christian.

Other findings by Pew:

• 56% of the members (247 in the House, 52 in the Senate) are Protestant, with Baptist as the most represented denomination.

Foreign Birth
• 9 Representatives and three Senators (2.2% of the entire 113th Congress) were born outside the United States; their places of birth include: Canada, Cuba, Great Britain, Japan, Peru, and Thailand.

• According to CQ Roll Call, the House currently has 87 veterans (including 2 female members, as well as 2 Delegates); the Senate has 18.

This article was cross-posted from The Morning Delivery