In 2008, IFC acquisitions executive Jeff Deutchman curated dozens of first-person accounts of the historic election of Barack Obama to make his film 11/4/08, and a forward-thinking interactive website which allows people to upload, access, and edit related footage. In honor of the midterm elections, I talked with Deutchman about the film, its historical relevance, and his thoughts on whether or not the Obama administration lived up to all that hope.

In keeping with the philosophy of the film, 11/4/08 had a one-night theatrical release in October 2010 in cities across America, but if you missed it, it is currently available to stream on Amazon, YouTube, and Sony PlayStation. It will also be presented as an installation at Damon Dash Gallery in New York City starting November 5th.

What attracted you to this project and how did it take shape? 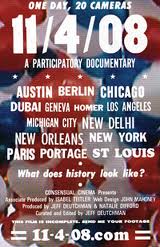 Jeff Deutchman: So basically in 2008 I got swept up with election fever much like many people, and I began to think about the election as a unique opportunity in that it's not that often that you can anticipate what people are calling a historic event. I thought what would be interesting is to see whether it's possible through crowdsourcing and using social networking and the web and cheap digital technology to capture a historic moment. For me it was really about filming as an extension of what a historian does.

Why did you choose the crowdsourcing method? Was it linked to the subject matter, or logistical?

Deutchman: Well it's logistical because, again, comparing this moment to, say, an isolated incident like Katrina, where it happens in one place, a single documentarian could conceivably go to New Orleans and perhaps capture the essence of that event on their own, here you have a historic moment that has reverberations around the world and is taking place in a single day. It's not possible to do it alone.

Do you think your method also says something more about what this moment meant to the country, the world?

Deutchman: Yes. There is a way of looking at that election from the point of view of the Obama campaign themselves, using social networking unlike any presidential campaign or any political campaign had previously, and as a result energized young people to vote like never before. So yeah, there is a fitting aspect in that I in a way capitalized on that same sense of energy and excitement through the same means.

How did you choose your participants, and how much did you interact with them? 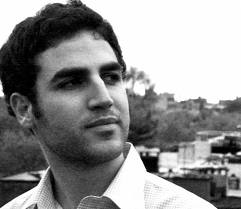 Deutchman: I wanted to cast as wide a net as possible, so it was really just a matter of who responded to my initial call to action. I sent emails and Facebook messages to basically everyone I knew, and some people bit, and some people didn't. I gave very loose direction. Once I had a list of about fifty people who were interested in helping I sent out one email the day before just outlining what I was looking for, and that was very broad. I just said I want you to film as much as you can tomorrow on the day. It has to be during your waking hours of 11/4/08. I said I'd prefer the observational approach whenever possible, I didn't want people to interfere with what was going on. I just wanted to capture it. And that was really it. I also filmed myself that day, I wasn't really in touch with any of the filmmakers over the course of that day, and then over the next year I collected all the footage.

Did you find yourself getting emotional going through the footage?

Deutchman: Yeah. I had a huge range of reactions to the footage because I felt after a while like I was in this Groundhog Day of my own creation. I don't remember when I first had that thought, but at some point in the editing process I just kind of realized it was like - and I think a lot of filmmakers feel this -I know these people so well, and all of the filmmakers and the people who are in this footage have probably forgotten that they even did this and I'm living with this every day. And it was especially interesting from the point of view of all of this excitement about Obama and how drastically the mood had changed by the time I was editing the film.

It must have been difficult to try to preserve the emotion of that day when you had moved on.

Deutchman: It became a strange challenge for me because it wasn't necessarily just about preservation, although that was part of it. I wanted to allow film to breathe in way such that people could bring in whatever moment they were into the film. So, the moment I was in when I was editing it, and the moment that a lot of people were in, I wanted that same cynicism to be able to apply to what they were watching. But I also wanted to make it so that whatever mood people are in ten years from now, they can bring that to the film.

Is the film more than a historical artifact? Do you think it is going to stay relevant?

Deutchman: That was my biggest challenge, allowing the footage to just completely stand on its own, and inserting some kind of editorial commentary on what was happening. And to the degree that I did the latter, it's very subtle; there's no voice-over narration, there's very little text. I was constantly wrestling with how much to insert my own voice... because I kept wanting to say, it's okay to be cynical. I kept wanting to reach out to my audience and say, that's all right, I'm not just trying to be an optimist here. I'm allowing you to interact with this in a cynical way. But I also didn't want to say that too loudly because I want the optimists to be able to watch it in their own way, and I also want whatever people are feeling in ten years to be relevant as well. So in a way I think in order to make it more timeless I had to make it as hands off as possible.

Having made this film about the hope of election night, how do you think the Obama administration is faring now?

Deutchman: Personally I think that there's a lot to be disappointed by. I think the campaign consisted of two competing, probably mutually-exclusive promises. One was bipartisanship and the other was change. And it seems like the administration really opted for the former over the latter. And to what end? There is no bipartisanship, so why sacrifice change to that end when it's not even gonna happen.

How soon after the election did you find yourself becoming disillusioned?

Deutchman: I don't think it was ever that realistic to expect that much within two years. And things have happened, let's be honest, there's a health-care bill, and as compromised as it is that's pretty amazing. So I think I'm one of those people that is a little bit defensive about it because on the one hand I think you do have to have patience. But I do also think that it's your right to hold the administration somewhat accountable for the specific decisions that have been made. Specifically, I think that the Democrats ought to be as ideological as the Republicans were, and use reconciliation if necessary and then let whatever they pass stand on its own.

So you voted for Obama even though you didn't agree with what you think of one of his two major promises?

Deutchman: Politics is pragmatic and there's no question in my brain that I made the right decision then, and I plan to vote for the Democrats in the midterm elections, and I plan to vote for Obama for reelection. Because no matter how much he goes about executing policies in a way I might disagree with, my values overlap with the Democrats much more than they do with the Republicans.

Do you really give Republican candidates a fair shake? Do you research every election?

Deutchman: For presidential elections, yes, for smaller elections, case by case, not as much I'll admit. But while I do think that research is important, by and large there are assumptions you can make about the two parties, and when specific candidates stray from those assumptions, that's when you have to pay attention. If someone is not aligned with their party on a specific issue, then I would take note of that, but there's not really one issue that I would say is so important that it would make me vote for a Republican candidate in spite of all the other issues that I would disagree on with that person.

What are your thoughts on your district's local politics?

Deutchman: I just finished a movie -- now I have to do my research and figure all that out.