As James Bond shoots, punches and bombs his way through his 24th adventure, "Spectre," he remains the prototype of the no-nonsense agent who can take a beating as well as give it and kill without remorse to accomplish his assignment. He also doesn't always follow orders and frustrates his superiors . But he always gets the job done. Other super spies have come on the scene, owing much to Fleming's immortal model. They're not in any order because they're all the very embodiment of badass. 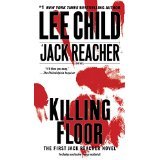 Character: Jack Reacher
Novel: Killing Floor
Author: Lee Child
Jack Reacher is a drifter. The 6'5" former Major in the U.S. Army Military Police Corps roams the U.S., taking odd jobs and investigating suspicious, dangerous situations. Reacher wanders the country through 20 action-packed novels that the New York Times describe as "Smart and Breathless." The ultimate loner, drifter and avenger, Reacher travels lighter than any other hero. He never washes his clothes. When they get dirty he buys a cheap new set. He uses baseball players' names as aliases and knows, of course, dozens of ways to kill. Tom Cruise brought the dusty lone knight hero to the big screen with Jack Reacher in 2012. 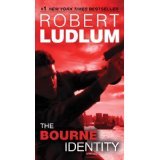 Character: Jason Bourne
Novels: The Bourne Trilogy
Author: Robert Ludlum
The Bourne Trilogy was wildly popular before Matt Damon starred in the film versions and made them massively wildly popular. It's a great premise. . In the debut novel, The Bourne Identity, the main character has no past. And he may have no future. His memory is blank. He only knows that he was fished out of the Mediterranean Sea, his body full with bullets. There are a few clues: evidence that plastic surgery has altered his face, a Swiss bank account containing four million dollars, and a name: Jason Bourne. A lot of people, including the world's best assassin, are trying to kill him as he pieces together his past to find his identity. . 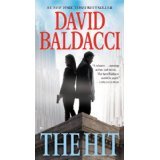 Character: Will Robey
Novel: The Hit
Author: David Baldacci
Robey is the CIA's best assassin. He's the pro the U.S. government assigns to eliminate the worst of the worst bad guys. In The Hit, Robey's skills are matched by fellow agent Jessica Reel who has gone rogue, killing members of the agency. Robey is called on to bring her in dead or alive. But as Robie pursues Reel, he finds that there is more to her betrayal than meets the eye. Her attacks on the agency unfold a larger threat that could send shockwaves through the U.S. government and around the world. 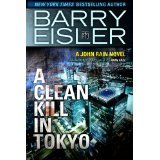 Character: John Rain
Novel: A Clean Kill in Tokyo
Author: Barry Eisler
John Rain is a Japanese American who learned his lethal trade as a member of the U.S. Special Forces. Although tortured by memories of atrocities he committed in Vietnam, he's become a paid assassin who lives in the shadows and trusts no one, even those who pay extraordinary sums for his ability to make murder look like natural death. Because of his mixed race he's uneasy in both the U.S. and Japan. He is a ronin, a "wanderer, a masterless samurai." Author Barry Eisley worked in a covert position with the CIA's Directorate of Operations, among other jobs and is also experienced in the martial arts. 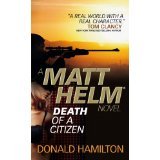 Character: Matt Helm
Novel: Death of a Citizen
Author: Donald Hamilton
Matt Helm is a U.S. government counter-agent whose job is to kill or nullify enemy agents. Published between 1960 and 1993, the 27 books in the series portray Helm as jaded, ruthless, pragmatic, and competent. Critic Anthony Boucher wrote: "Donald Hamilton has brought to the spy novel the authentic hard realism of Dashiell Hammett; and his stories are as compelling, and probably as close to the sordid truth of espionage, as any now being told." The novels were solid sellers in the mass market paperback world during the 1970s and 80s. Dean Martin starred in four Matt Helm films the 1960s and 70s. Paramount now has the option on them. 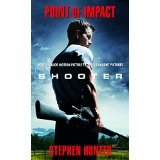 Character: Bob Lee Swagger
Novel: Point of Impact
Author: Stephen Hunter
Bob Lee Swagger was one the best Marine snipers in Vietnam. Twenty years later, he wants to be left alone and to leave the killing behind. But a shadowy military organization seduces Bob into leaving his beloved Arkansas hills for one last mission for his country, unaware until too late that the game is rigged. The assassination plot is executed to perfection until Swagger comes out of the operation alive, the target of a nationwide manhunt, his only allies a woman he just met and a discredited FBI agent. Swagger is on the run, using his lethal skills once more--but this time to track down the men who set him up and to break a dark conspiracy aimed at the very heart of America. The first in the acclaimed Swagger Series. 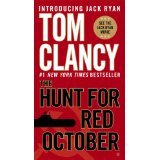 Character: Jack Ryan
Novel: The Hunt for Red October
Author: Tom Clancy.
This 1984 novel was Clancy's debut. The story follows Jack Ryan, a former marine turned CIA analyst as he leads a group of US Naval officers in taking possession of a cutting-edge Soviet nuclear submarine from 26 defecting Soviet officers. The novel was originally published by the U.S. Naval Institute Press--one of the first fictional works it ever published, and still its most successful. President Ronald Reagan on a televised press conference called it "a perfect yarn," which gave it an international promo boost. The 1990 film had an all-star cast including Alec Baldwin, Sean Connery, James Earl Jones and Sam Neill. The Hunt for Red October War Game became one of the most successful war games of all time. Not bad for a story about stealing a sub. 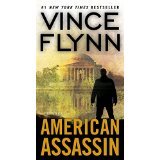 Character: Mitch Rapp
Novel: American Assassin
Author: Vince Flynn
Mitch Rapp is an undercover CIA counter-terrorism agent who thwarts Muslim terrorist attacks on the U.S. He's an aggressive operative who is willing to take measures that are more extreme than is commonly acceptable. Six months of intense training has prepared him to bring the war to the enemy, which he does with brutal efficiency. Rapp starts in Istanbul, where he assassinates the Turkish arms dealer who sold the explosives used in the Pan Am attack. All roads lead to Beirut, though, and what Rapp doesn't know is that the enemy is aware of him and has prepared a trap. The hunter is about to become the hunted, and Rapp will need every ounce of skill and cunning if he is to survive Beirut and its various terrorist factions. His constant frustration with procedures and red tape are a major theme throughout the series. It's no surprise that Flynn served as a story consultant for the fifth season of the TV series 24. 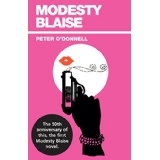 Character: Modesty Blaise
Novel: Modesty Blaise
Author: Peter O'Donnell
The series began as a comic strip in 1963 and was later turned into novels whose female spy hero was decades ahead of her time. In her first adventure for British Intelligence Modesty Blaise with her loyal lieutenant, Willie Garvin, must foil a multi-million pound diamond heist. They travel from London to the South of France, across the Mediterranean to Cairo before battling, against impossible odds, a private army of professional killers. Modesty is a tough, brilliant and beautiful woman who is an expert in martial arts and a variety of weapons.
Stieg Larson (The Girl with the Dragon Tattoo) was a big fan of the Modesty books as well as Quentin Tarantino who paid tribute to her in Pulp Fiction. He is said to have modelled Uma Thurman's, "The Bride," after Modesty in Kill Bill. 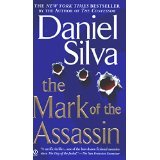 Character: Michael Osbourne
Novel: The Mark of the Assassin
Author: Daniel Silva.
When CIA man Michael Osbourne is called in to investigate the terrorist bombing of an airliner off the coast of Long Island, there is one relevant clue that drives him: a body near the crash site with three bullet holes in its face. Osbourne recognizes the deadly markings as the work of a world-class assassin, a man whose very existence has never been proven. And among those victims was a young woman Osbourne loved years before. When the identity of the assassin's employers becomes clear, Osbourne puts himself and his loved ones in the sights of the most fearsome man on earth.
The book is laden with suspense with deft plot twists, complex characters, and a villain who is among the most ruthless in modern thriller fiction. 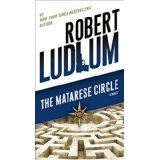 Character: Brandon Scofield
Novel: The Matarese Circle
Author: Robert Ludlum
An international circle of killers, the Matarese will take over the world within just two years. Only two rival spies have the power to stop them: Scofield, CIA, and Talaniekov, KGB. They share a genius for espionage and a life of explosive terror and violence. But though these sworn enemies once vowed to terminate each other, they must now become allies. Because only they possess the brutal skills and ice-cold nerves vital to their mission: destroy the Matarese. Ludlum, creator of The Bourne series, is the crown prince of thriller and spy novels. 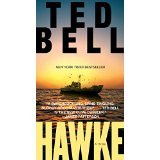 As a direct descendant of a legendary English privateer, Lord Alexander Hawke is skilled in the ways of sea combat -- and one of England's most decorated naval heroes. Now, Hawke returns to the Caribbean on a secret mission for the American government. An experimental stealth submarine with 40 nuclear warheads is missing and a rogue terrorist has his finger on the countdown button. In a race against time, Hawke must locate the sub before a strike can be launched. After a lifetime of nightmares, he can finally settle the score with the men killed his family.
A James Bond for the 21st century, Alex Hawke is suave, sexy, smart, wealthy, and deadly. Hawke is the first book in the series.

Used with permission from "50 Great Books Like James Bond" at About Great Books.