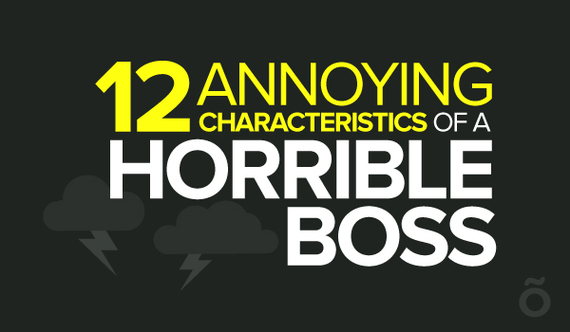 I'm sure we've all been there at one point, we've worked a job where the manager was absolutely dreadful.

The type of boss that makes your job unbearable to a point where you feel like walking out during any given moment.

Unfortunately, there are a lot of horrible bosses out there and they can make even the funnest of jobs seem frightful.

Here are some of the characteristics of a horrible boss:


Add this infographic to your site by copying this code:

There's a clear difference between a boss and a leader.

A great leader knows how to motivate people and make the people around them better.

A horrible boss is more of a controlling delegator, who only focuses on assigning busy work to employees without having to necessarily explain to the employees why.

I'm sure a lot of employees out there still don't know why they're filling out TPS reports.

Horrible managers can be indecisive in what they want completed out of certain tasks.

This is because they don't necessarily analyze situations enough to see what the end result is. They just think things are "good ideas" and tend to run with it, without necessarily weighing in the pros and cons.

When they do think it through, they don't know if they want to follow through because they don't know what they really want to make that assumption, and if it were to fail, it'll look bad on them.

A great leader will evaluate the situation and be able to realize if decisions will better the company. Even if the decision is a good one, they aren't afraid to fail fast and try something new.

They always think they're right, they don't want to hear any other person's opinion, they will show disregard toward a potentially better idea ... or take credit for it.

Stubborn managers can break a department's spirits and be detrimental toward the growth of a company.

Whereas leaders are open-minded enough to know that everyone in the office is equal and that employees can conceptualize new ideas and bring more to the table if leadership remains humble.

Poor management embraces being stagnant and don't like changing certain processes within the office.

People in general don't like doing anything that will require them to change; however, for managers to resist change is putting jobs on the line.

Growing as a business requires that you constantly reinventing the office environment and coming up with new concepts that'll allow your employees to work better and satisfy your customers.

I guess I may have a personal bias, but, micromanaging is probably the worst thing that one human can do to another.

A horrible manager that is constantly reviewing work to make sure it's completed to their liking is quite the imbecile. They are demotivating their employees and ruining the quality of their work.

Some of the best places to work enforce employee autonomy so they can give their employees the freedom to accomplish more task and do it to their liking. It's a lot less stressful for both management and employees.

This type of tactic make work in an archaic workplace where we're supposed to look at management as some form of demigod, but the way things have changed throughout the past couple of years, there is no room for this kind of leadership.

The prototype modern day workplace is a lot more liberal and doesn't use fear as a form of management.

We've all seen those old movies where the managers threaten an employee by saying they're going to fire them if they don't complete a big task.

Well, there's a reason why the manager in those movies usually are the villains. So sorry, scrooge ... that kind of management doesn't work anymore.

It's bad when a boss doesn't see the long term vision and they only focus on making short term fixes.

Whether it's relating to a product/service, work environment, or even conflicts. A boss who can't take the time to appropriately have a goal set or a long-term vision can bring down the moral of colleagues.

Great bosses tend to have a roadmap of what to do for the coming weeks, months, and sometimes even years.

There's no place for nepotism in the workplace. Horrible bosses shouldn't be choosing favorites in the office, especially if they're going to refer a person for a big position.

A manager can make friends with employees (even though I've had other managers tell me different) however, they have to know when to separate personal friendships from business.

Leaders often see any personal relationship they make with a person as an add-on to being a colleague.

They can differentiate work and personal stuff, and they often try to do their best to establish a great relationship with everyone at their office.

Similar to being stubborn, an arrogant boss can ruin workplace with their ostentatious personality.

They will carry around this horrible bravado that will make them seem as if they're the most powerful person in the world. Which in my opinion is wrong.

There's no room for cockiness in an office and good leaders tend to check their egos at the door.

They know that having engaged employees comes from making sure that everyone is working together as a team; not trying to show off all of their personal accomplishments.

I find that angry bosses are absolutely ridiculous. They think because they've obtained a position of power, they can berate, belittle, and treat others wrong.

This is not a definitely not a good indicator of sound leadership and it's kind of using leadership by fear.

Real leaders can obtain an even-keel attitude and not let their emotions get the best of them.

This is similar to someone who makes excuses all the time within an office. This type of manager will always look to blame someone instead of taking it on themselves.

Basically, the blame-shifter will always look at all the things that went wrong and put it all on the employees.

Lastly, a horrible boss is driven by emotion. It's one thing to make a couple of decisions based on confidence or a gut feeling, however, it's another to do it and not have any reasoning behind it.

Great leaders can usually make a decision by using a good amount of data to back up their reasoning.

This is a less riskier route and has a higher reward. There's a reason that there are so many analytic platforms on the internet. It's so great managers can use them to their advantage and come up with data to confirm any assumptions.

Remember, there's a clear cut difference between being a boss (a horrible one at that) and a leader. I think that workplaces will grow a lot faster if we continue molding people to become better leaders. That's why it's important to make employees engaged within their offices. So try some unique employee engagement practices that will allow people in your office to lead better and respect one another.