Lips are, of course, essential for eating and speaking. And whistling. And kissing. And we'd look pretty silly without them.

But if you think that's all there is to say--and know--about human lips, you're in for a big surprise. Just take a look at our list of 12 fascinating facts about lips:

1. Your lips are unique.

Many animal species have lips, of course. But only human lips have such a distinct border between the pinkish, reddish parts and the surrounding skin, according to LiveScience. Scientists call this the "vermilion border."

2. Your lips can help you choose a mate.

It's hard to kiss without lips, and some scientists believe that kissing plays a key role in mate selection. It seems that locking lips brings potential mates close enough that they exchange biological information--via sniffing another's pheromones. Women are believed to prefer the scent of men whose immune systems differ from their own--and pheromones may be a key to this determination.

3. That fleshy bump in the middle of your upper lip has a name.

In fact, that fleshy bump has a few names, including procheilion, labial tubercle, or tuberculum labii superioris.

4. Your lips can say something about your sexuality.
Hard to believe, but recent research links the shape of a woman's lips with her ability to achieve orgasm. Specifically, a Scottish psychologist named Stuart Brody found that women with a prominent tubercle of the upper lip are better able to achieve vaginal orgasm. Who knew?

When it comes to attracting the opposite sex, big lips are better, the BBC reported. That is, at least where a woman's lips are concerned. But women seem to prefer men with medium-sized lips, a University of Louisville psychologist told the BBC in 2003.

6. Your lips aren't the world's biggest.

Unless you're Kristina Rei, that is. The young Russian woman is said to have the world's biggest lips, and no wonder. She underwent multiple silicone injections, all part of an effort to make her lips like those of Jessica Rabbit of the hit 1988 movie Who Framed Roger Rabbit? Did she succeed? See for yourself.

"Kissing was very restricted up until very recently to areas of Asia--Southeast Asia mainly--and Europe until the conquests in the 1500s," Dr. Vaughn Bryant, professor of anthropology at Texas A&M University, said in a written statement. "No one in the New World kissed, no one in Oceania kissed, the Eskimos didn't kiss, people in sub-Saharan Africa didn't kiss." According to Bryant, kissing started in India and spread slowly after soldiers under the command of Alexander the Great brought the custom home with them.

8. It takes many muscles to pucker up.

To pucker up for a kiss - or to play that trumpet - you have to contract your orbicularis oris. Scientists used to think the orbicularis oris was a single sphincter muscle inside the lips. But now we know it's actually a complex of four muscles.

9. Red lips can make you rich.

Some have said that lipstick makes women more attractive to men because it makes the lips look more like the vagina's labia. Hmm. But one thing that seems clear is that wearing red lipstick can pay off for women. In a recent study from France, sociologists showed that waitresses who wear red lipstick earn bigger tips--though only from male customers. Waitresses' red lipstick had no effect on the generosity of female customers.

No wonder--lips simply don't have sweat glands. Since sweat glands also help keep the skin moisturized, that means lips tend to dry out faster than other parts of the body.

The skin of the lips is thinner than skin elsewhere on the body, consisting of three to five cellular layers instead of up to 16. Thinner skin means it's easier to see the blood vessels underneath. Of course, this effect is more pronounced in people with light-colored skin.

Lips get their shape in part from collagen. But as the body ages, the body produces less of this critical protein, and the lips start to lose their plumpness, dermatologist Dr. D'Anne Kleinsmith told Real Simple. Another factor, she said, is ultraviolet light from sunlight. "One way to help preserve the fullness of your lips is to protect them from the sun by wearing a lipstick or lip balm with sunscreen," Dr. Kleinsmith told the magazine. 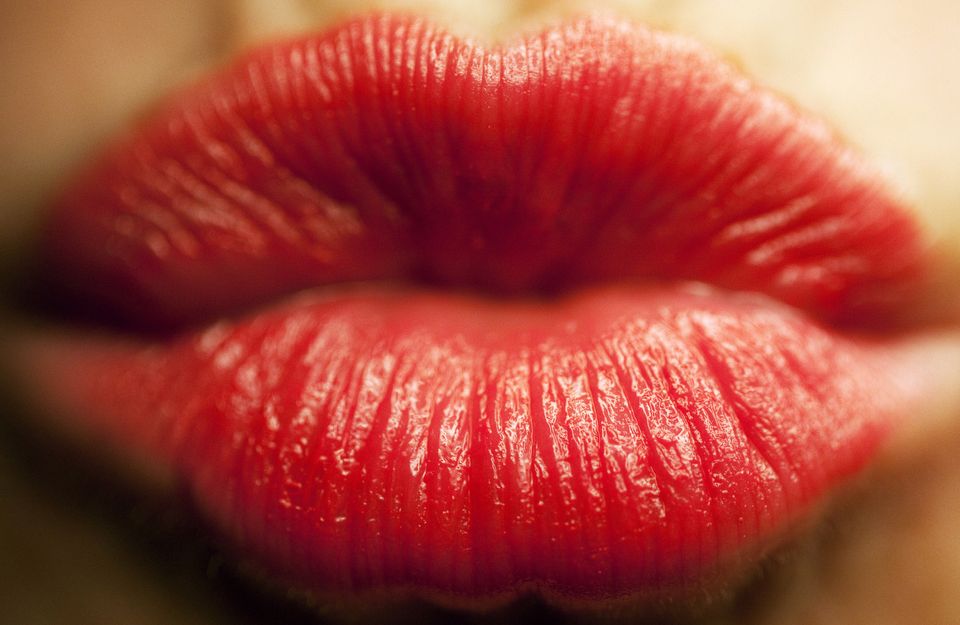 1 / 8
Lipstick Meant You Were A Prostitute?
Early in the Greek empire, red lipstick or lip paint signaled that a woman was a prostitute, given that most women during that time typically went without makeup. (<a href="http://dash.harvard.edu/bitstream/handle/1/10018966/Schaffer06.html?sequence=2">Source</a>)
Getty