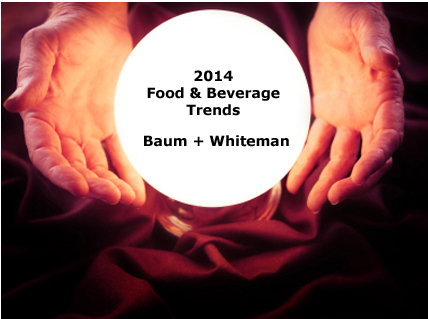 Every year around this time, my husband The Restaurant Consultant consults his crystal ball and issues a report on how the world of restaurants and hotels shapes up for the year ahead.

It tends to be heavy reading since he's a heavy thinker, but interesting pictures and a sardonic style make the 15-page forecast fun to read. What's struck me profoundly is the report's emphasis on luxury. Lofty tasting menus in elite restaurants can run, with wine pairings, $1000 for two with tax and tip, and these are booked out for weeks and months. There are places around the country where a roast chicken for two can run $70. One New York restaurant actually has a carrot for $20! And in the US, Spain and China, brand name chefs are adding costly theatrical hijinx to enhance their guests' dining experience: laser light shows, video projections, high-definition audio -- all changing with each dish that's served, all very costly. You can read about these trends and more here.

All this is taking place while our economy is still limping and food stamps are on the chopping block. Which seems to underscore the opinions of some economists that income distribution indeed is skewed.

I also was struck by the report's observations that department stores and other retailers are getting back into the restaurant business. In the early 1980's I was the executive chef for all of Lord & Taylor's restaurants around the country and recall fondly how our company, and its competitors, all had in-store dining destinations. But about 30 years ago they began shutting them down and sending their customers into shopping center food courts, which, of course was a big mistake. So I smiled reading that Brooks Brothers is opening a mammoth steakhouse in New York, the first of a planned chain; that Tommy Bahama's stores with restaurants vastly outperform those without food, that Restoration Hardware is working on a wine bar concept in Boston and that Nordstrom has plunked down a bar smack in the middle of their women's fashions (so men can cry in their beer).

Foodies will want to know about up-coming buzzwords in the forecast, so if you're tired of kale, it is good to know that creative versions of cauliflower are on the way. Hipster Asian restaurants and Jewish fusion food (think Jewish-Japanese, for one) will be hot. A Middle Eastern dish called "shakshuka" (baked eggs in spiced tomatoes) will pop up on brunch menus across the board; I fondly recall an Arab village in the Moroccan desert, watching one of these made over a charcoal fire. Now that quinoa's old news, you'll see more buckwheat, freekeh (green wheat) along with trout, octopus, Mexican sandwiches called Cemitas making appearances in cooking and home-centric magazines. And if you haven't been bombarded enough about gluten-free food, it is getting a boost for all the Paleo diet variations.

I'd watch for healthy food chains like Sweetgreen, aimed at Millennials, taking the salad bar concept upscale on a trendy locavore journey, and thoughtfully adding wine and beer.