The business world never imagined that some day, women would be beating down its doors. The workforce was created by men, for men, a zillion years ago. Change is glacial. Invisible rules that don't serve women's success at work have been grandfathered in by our great- and greater-grandfathers, and passed down to their sons through osmosis. Ceilings are largely un-cracked -- yeah, not exactly a news flash. But there's a lot women can do to achieve goals and find greater happiness right now, while we wait, and wait, for the system to change. What rules will you break today? #darlingyoucan

1. If You Have a Life, You're Not Working Hard Enough.
Most companies believe that being "on" and available 24/7 is the only way to go. Great for them, less for you. As the lines between work and life blur, it's a good to recognize that knee-jerk agreement to a work request isn't the only possibility. Boundaries are important for sanity, for health. Create yours. I struck a childcare deal with my husband that was fair to both of us. Sundays were about cooking and a big family dinner, and my office came to learn that it wasn't negotiable. What lines will you draw to create space in your life?

2. Gender Bias Is an Issue of the Past.
The conversation around bias in the workplace is boiling furiously, and while things are looking up, it's critical to keep talking. What can you do? Work where your goals are supported. Listen to women who say they're suffering bias. Speak up when you see something that smacks of it. I'm not saying burn your paycheck or march on Washington (though that's OK too). But don't kid yourself, either -- it's is still very real, and tripping you up. It's important to recognize the barriers you may not have thought existed, because when you can see them in front of you, you can get around them.

3. Mentoring Is an Act of Charity.
What if you thought about mentoring as an act of growth -- your professional growth? Developing the careers of others taught me most of what I needed to know about leadership: how to encourage and inspire, give feedback and make judgment calls. Committed mentoring is like piano practice for the recital; it gets you ready for the day you want to raise your hand for the bigger job. We learn as we teach, over time proving to ourselves that we have the skills and experience we need to lead. Greater confidence is a big bonus.

4. Good Things Come to Those Who Wait.
"It's not a meritocracy." Say it like a mantra as you fight your instinct to keep your head down, work hard, over-deliver and watch your less patient male counterparts get the lion's share of the raises and promotions. Make sure people know who you are and what you do. Don't be afraid to speak up and be visible. Finding mentors to guide you and unlock doors can be the difference between a career that rocks and one that plods.

5. Nice Girls Don't Get in Your Face.
Today is the day to fling "good girl" behavior right out the window. Speak your mind, share your thinking, show what you're made of and ask for what you want. If you don't get it right away, ask your boss how to make it happen. Try to worry less about being labeled "pushy." Remember, most men start thinking about their next raise, promotion, even job, as soon as they land this one. When you step up and put your great ideas and thoughts forward fearlessly, you'll be on your way to making a greater impact.

6. Because You're Not Worth It.
Women undervalue themselves from their earliest jobs, asking for on average of $7,000 less than men do at the starting gate, and companies aren't rushing to give you more than you ask for. So, reach high even if it's uncomfortable. You may not get as much as you want, but you'll get more than if you lowball. Money defines our value, yet studies show asking for top dollar puts us in danger of being seen as boastful, demanding and overreaching. It's a real dilemma. Nevertheless, we say go for it. This isn't about being liked. It's about self-respect and fairness. "Don't ask, don't get." It literally pays to stand up for what you're worth.

7. I'll Do It Myself, Thanks.
Being the hero is an outdated approach to success. It's not weak to link arms with other people to solve a problem. Often those other arms, brains and perspectives can make the problem smaller and more manageable. Reframe "asking for help" as "asking for what you need to succeed". Your own deeply ingrained reflex to tough it out alone may be hard to change, but you can kick it. Tap into your natural, female instinct to collaborate. You'll get to better solutions.

8. Darling, You Can't Do Both.
Don't let your career ambitions, negative headlines or today's pressure to be supermom stop you from having children if you want them. It may take some creativity to figure out how to have the home life and career you seek, but there's never been a better use of your problem-solving skills. In my case, the solution was to not do my job alone. I shared the Chief Creative Officer role -- usually a one-person operation -- with a partner. It was less heroic, but more life-friendly and proved to be a great model for leading the group. If you want to have kids, have kids. You'll never be sorry.

9. Stay Safe.
Are women afraid to take risks? Many people would say yes. Others would just say we go about it differently from men. More women need to be seen to lead and also be seen to fail. Stumbling, falling and picking yourself back up are part of the process. Mistakes are OK. Failure is education. Worry less about the mistake and more about how you respond. We all learn to walk through tripping.

10. Networking Is For Men.
Many women see networking as an archaic, phony practice that usually takes place on golf courses and hold their noses. But what if there was a different way to do it? What if you just thought of it as getting know someone, with no agenda? Send a note saying how much you got out of an article they wrote or a talk they gave. Sometimes going to that conference or after-work event is worth twice as much as one more night burning the candle at both ends. Shift your mental picture of networking from talking to listening; from schmoozing to giving; from a distasteful man's game to a way of behaving that leads to rewarding friendships and new experiences.

11. To Win, You Have To Play The Game.
For most women in business, it's still a square peg, round hole. There's a game going on they don't understand/don't want to play. The bluffing, the one-upping, the "leave your emotions and personal life at home" compartmentalizing. Authenticity is the key to doing a job the way you feel best about doing it. Remember, there is no game if there are no players. Women can bring their gutsy, open-minded, emotionally present, intuitive selves to work every day, along with their intelligence, hard work and talent. Being true to you is the best long-term career strategy.

12. Ambition Is A Straight Line To The Top.
An uninterrupted climb to the top often doesn't suit women, especially if they want children. Sometimes the twists and turns take us places we didn't expect -- an unplanned baby, a job in a different country that doesn't fit a straight up the ladder strategy. Consider ignoring the ladder. Take the lily pad approach instead. Jump from smaller to larger to smaller to much larger, according to the life you're reaching for. If you want the corner office, go for it. Have a different goal? Go for that. There's more than one way to pursue a rich life and success has many definitions. 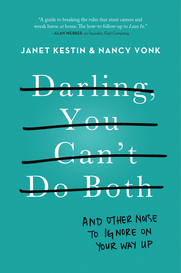 Janet Kestin is co-author with Nancy Vonk of DARLING YOU CAN'T DO BOTH: And Other Noise to Ignore on Your Way Up available from HarperCollins on October 7, 2014