It is rare in these troubled times to hear good news about the rhino: poaching has returned and a creature that has been with us since the days of the dinosaurs seems in mortal peril. That danger is real, but the rhino is very much still among us, and Kenya remains one of the best places on the planet to see both the black and white rhino.

The story of the black rhino, often described as Kenya's indigenous rhino, is particularly poignant. During the poaching wars of the 1970s and 1980s, black rhino numbers in Kenya fell from an estimated 20,000 to just 300 by the end of the 1980s. Thanks to intensive conservation efforts, those numbers rose slowly in the decades that followed and Kenya's last rhino census gave a figure of around 620 black rhinos left in the Kenyan wilds in 2014. This amounts to around half of all black rhinos left in the wild, and close to ninety percent of the remaining eastern black rhino subspecies.

White rhinos, brought in as part of successful conservation efforts to save the species in South Africa, are thought to number around 350 in Kenya. 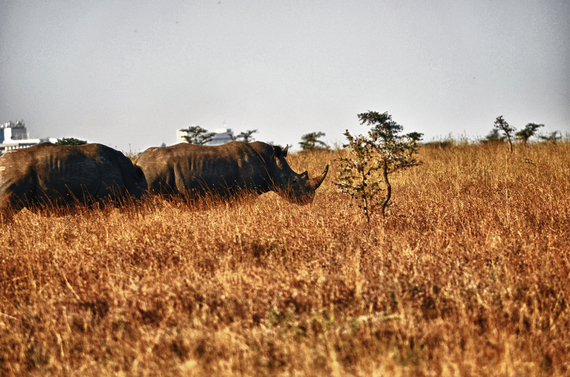 The most obvious place to begin looking for rhinos is in Nairobi National Park, on the south-western outskirts of Kenya's capital. Its success in both protecting and breeding black rhinos has earned the park the epithet Kifaru (Rhino) Ark, and it remains home to more than 50 black rhinos living in densities not seen anywhere else in Africa. This is the place to come for that incongruous image of a rhino snuffling across the savannah with Nairobi's skyscrapers in the background.

A cross between the private conservancies that are a specialty of central Kenya's Laikipia Plateau and a national park accessible to all, 75,000-acre Ol Pejeta Conservancy is a fabulous place to see rhinos. Numbering 100, Ol Pejeta's black rhinos form Kenya's largest population and sightings are almost guaranteed. In addition to the free-ranging rhinos, visit the Endangered Species Boma, a 700-acre enclosure which is home to three of the last six remaining northern white rhinos, including Sudan, the last breeding male left on the planet.

Just north of the Laikipia conservation zone but very much a part of the same ecosystem, Lewa Wildlife Conservancy is one of the main reasons why there are still rhinos left in Kenya. Back in the 1980s, the Craig family, who owns Lewa, and renowned rhino conservationist Anna Merz pioneered the setting aside of private land for conservation and then coupling it with high-end tourism. By 2015 there were 72 black rhinos and an estimated 62 white rhinos at Lewa, and nearly two dozen rhinos raised in the conservancy have been translocated to assist in growing rhino populations elsewhere in the country. You'll have to be staying at one of Lewa's top-end lodges to enter the conservancy, but with no restrictions on where the conservancy's vehicles can go, you'll never get closer to a rhino than you will here. There's even the chance to visit Lewa's Orphan Rhino project, following in the footsteps of Sir David Attenborough in the final episode of the BBC's Africa series. 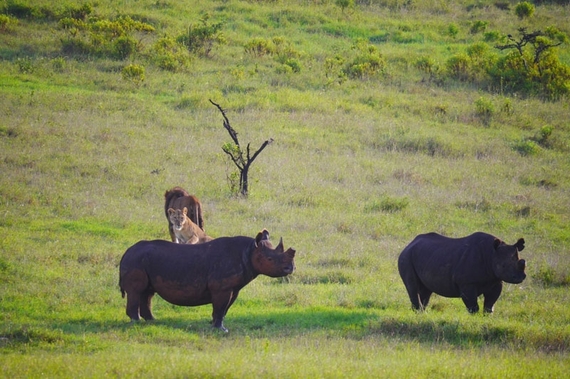 In 2014, a landmark agreement was reached to remove the fences that separated the high-end Borana from the contiguous Lewa Wildlife Conservancy. Borana's 35,000 acres of ideal rhino habitat is now part of one of the world's most important rhino sanctuaries, its own important population of rhinos now free to breed with the world-famous rhinos of Lewa to create a combined black rhino population almost 90 strong.

Run by the local Maasai community, Il Ngwesi Group Ranch, off Lewa's north-western border, has small but significant populations of both black and white rhinos. Il Ngwesi receives fewer visitors than either Lewa or Borana and the encounters here with rhinos are generally more intimate as a result.

When it comes to traditional national parks, few have such an important role to play in rhino conservation as the Ngulia Rhino Sanctuary, deep inside Tsavo West National Park in south-eastern Kenya. There are 78 black rhinos here in a fenced off 90-sq-km portion of the park -- sightings in the dense undergrowth can be elusive but such is the density of rhinos here that it is worth persisting. Rhinos released from the sanctuary into the wider park can also be seen in Rhino Valley that runs through the heart of the park. 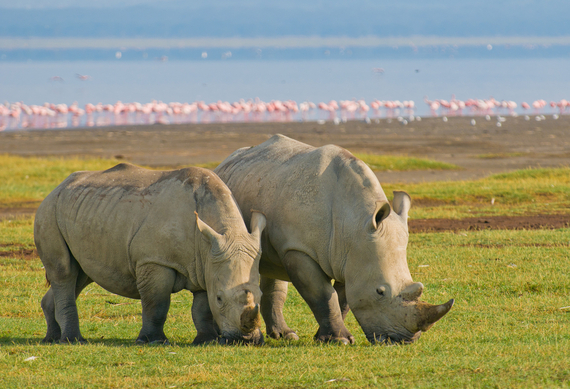 One of the iconic parks of Kenya's Great Rift Valley, Lake Nakuru is reliable for sightings of the park's black and white rhinos with a combined population of around 60. This is one of Kenya's smaller parks and the rhinos (especially whites) are often seen around the shore of the lake that gives the park its name.

This area of Kenya's central east stood at the epicentre of the poaching massacres that ravaged the country's rhinos in the 1980s. But Meru's heavily guarded, 48-sq-km Rhino Sanctuary has been restocked with rhinos from Lake Nakuru. With around 25 black and 55 white rhinos, it's once again an excellent place to see rhinos in the wild.

The Masai Mara is better known for its populations of big cats and the annual migration of wildebeest in their millions, but the Mara does have a few black rhinos in residence that add depth to the experience of visiting here.

High in Kenya's Central Highlands, a black rhinos cling to the densely forested slopes of Aberdare National Park. Thanks to this density of foliage, however, tracking down a rhino can turn into a nerve-wracking game of hide-and-seek, one in which you need to be ready at any moment to run from the charge of a rampaging rhino crashing through the undergrowth. 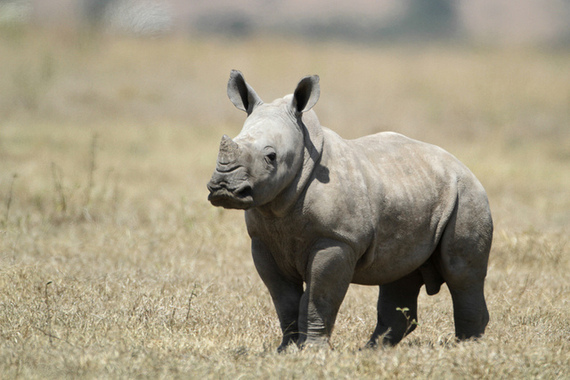 Solio Ranch, Kenya's oldest rhino sanctuary and 22km north of Nyeri, is another pillar in Kenya's story of rhino conservation -- so many of the rhinos you see elsewhere in the country came from here. The wide open horizons here make sightings a satisfyingly easy proposition. Solio has 22% of all the rhinos in Kenya and probably the highest density of rhinos per square kilometer in the whole of wild Africa. It is by far the best and easiest place to see rhinos -- sometimes as many as 50 on a single plain.

Out in Kenya's far west, close to the shores of Lake Victoria, Ruma National Park covers just 120 sq km, but includes within its borders important rarities that include roan antelope, Rothschild's giraffe and nearly 30 rhinos, of both black and white varieties.

For more great content to help you plan your African vacation, visit AFKTravel.com, the authority on African travel.