Having judged a number of street photography contests over the past few years in various countries, I can honestly say the same problems surface again and again in all cultures and across all levels of competence, or seemingly so. 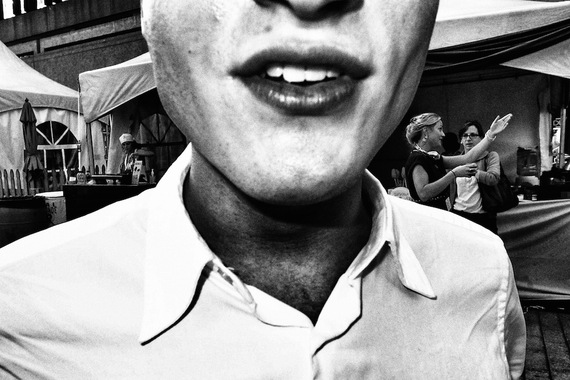 Firstly, the ever-increasing numbers of "book contest for a fee" schemes are becoming discouraging. Send me $35 and a few of your photos, I'll look them over and then maybe publish one in a book, which I will happily sell back to you for a nifty profit. Huh? Yet, these contests keep coming. Well, you know what they say... one's born everyday. Wake up, be smart, these people are trying to pay their electric bills... it's a business scheme, people. If your photography is good it will succeed without the need for you to fork over hundreds of dollars in contest fees. And, if this is not the case, something is seriously broken. 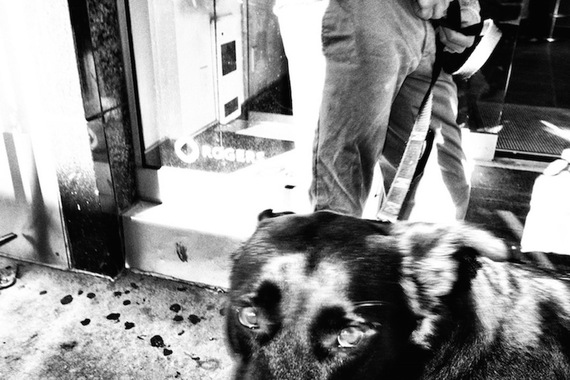 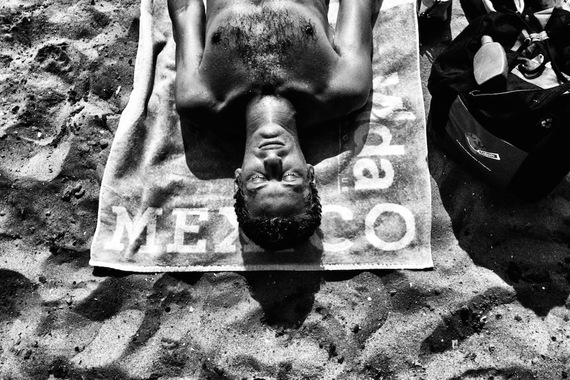 Avoid Bad Contests - There is no hard and fast rule to follow here. Use your common sense. A good reputable organization or magazine will not charge very much to enter their photo contest. Many are free! Also, look to see how much money is being awarded to the winners. Does it make sense given the entry fee? Also, is there an obvious appeal to your vanity on the table? In other words, are you simply going to "win" publication in a book that you will then have to purchase? This should raise serious red flags. There are two main ways that contest scammers will grab your money - font end and back end. Front end means they make a profit from high entry fees, while back end refers to selling you (the entrants/winners) a publication, often also with a hefty price tag. Finally, who is judging? Are these people credible? Do they make a living as an artist, or as a workshop/contest/snake oil salesman? Has their work attracted notable galleries, publishers, or museums? If not, it's likely not a gig worth sinking $35 or even $40 or $50 dollars into. If you cannot win real, reputable contests, you're work is not good enough. Spend your money on photographic study, not shadier more expensive "vanity contests". 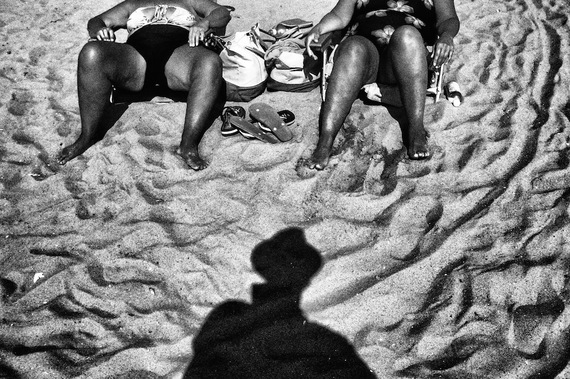 Next, the photographs being submitted to contests are also becoming more and more of a bust. Street photography seems to be a genre of photography that is very prone to copycats. Avoid cliché images and learn to develop your own style and vision. Here's some photographs that we have enough of already, so you can skip these from now on, please! Also, merely submitting the same bad photographs over and over again (yes, this does happen) is a waste of money. No matter how many times we see them, we won't suddenly change our minds. Make better photographs, rather than resubmitting the same junk. So, here's a list of photographs I'm likely never to select in a contest. After discussing them with a number of my colleagues, it seems they too have seen enough of these kinds of images. 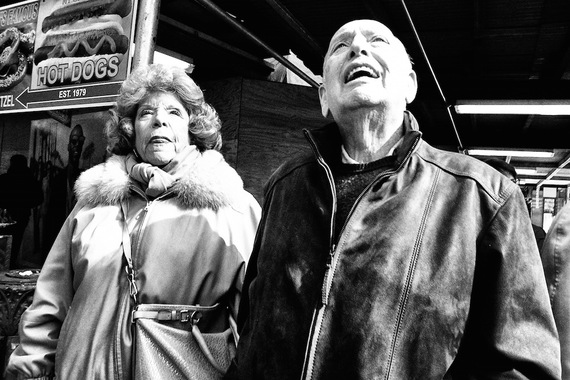 People on mobile phones - This is not interesting. Cell phones have been around for a few decades now, and no one finds this exotic in a photograph. So move on. Why are you still photographing people on cell phones as if they are using some kind of space age device? If only I had a dime for every photograph of a young girl on a cell phone that I've been asked to judge!

Billboards - People walking in front of a billboard does not a street photograph make. If you are looking to depict irony, or some kind of contrast in the scene, it better be damn good. If not, your photograph looks like a few hundred others I've just seen.

Homelessness - I'm really turned off by street photographs depicting homeless or otherwise vulnerable people. It really doesn't take much skill to photograph a homeless person in New York City and then crank up the sharpness and call it "urban grit". Come up with something else. Same thing goes for these high-contrast, overly sharpened, urban portraits we see by the dozen. Boring at best, and utter cliché at worst. Yes, I know, I've made some of these photos myself. I've made some of all these photos at one point or another. The point is I try not to do so anymore. We are in need of "new". Make a street portrait that can rely on its subject matter and not simply its over-processed "grittiness". It's done, it's over, like shoulder pads. 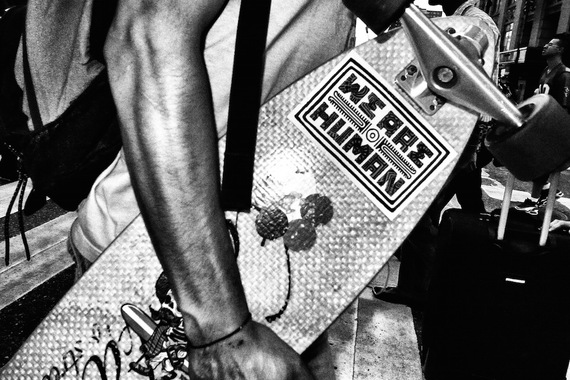 Trains - For the love of all things photography, if I see one more contest photo of a commuter train or some scene with a subway car whooshing by I'm going to jump in front of one. No more trains! Try airplanes or trucks.

Umbrellas - Almost as bad as trains. FYI: Just because someone is holding an umbrella does not mean that it is a subject worth photographing. Seems obvious when written out, but not so obvious when you judge a photography contest. Umbrellas are quite common in most of the Western world; nobody finds them intriguing. These photographs are, in point of fact, off-putting in their unoriginality and outright lack of vision. If all you can manage to do is photograph someone holding an umbrella, sell your camera and take up gardening or pet grooming. 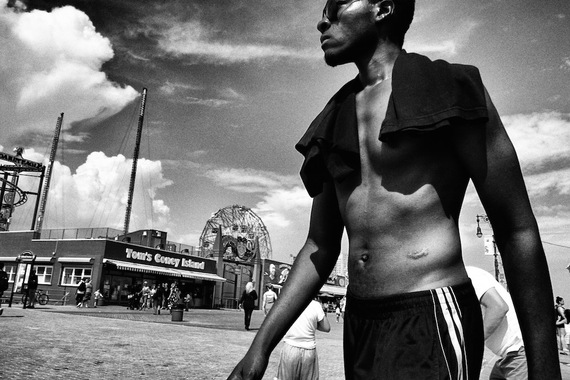 Puddles and reflections - Yes, water creates a reflection. Who knew? However, I'm tired of looking at the world through a puddle. I admit, in the beginning, these images were striking when done well, but that was a few million images back. Now, you are literally making a postcard when you photograph a puddle, and that's if you do it well. Send your photographs to Hallmark, not a street photo contest.

Window Dummies - Easy target, huh? Dummies don't run away, they don't fight back, or shout obscenities and, for the most part, they dress well - or perhaps not at all! Yet, they don't make great street photographs. They are cliché and certainly over-photographed. Grow a set and photograph real people. If you cannot muster up enough courage to photograph someone other than a window dummy, you're in the wrong game and your photos are telling people this! 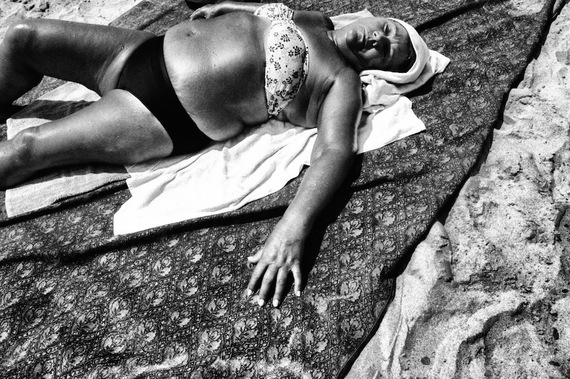 Flags - Enough with the flags, especially the United States flag, which is on every street corner as it is, must it also be in every photo too? Again, when done well, this can be a good image. However, like the umbrellas, when you see a flag that should not be an impulse to trip your shutter. Look for a bigger scene, a greater vision. And, you'll never trump that Robert Frank photo, so just forget it. Move on. 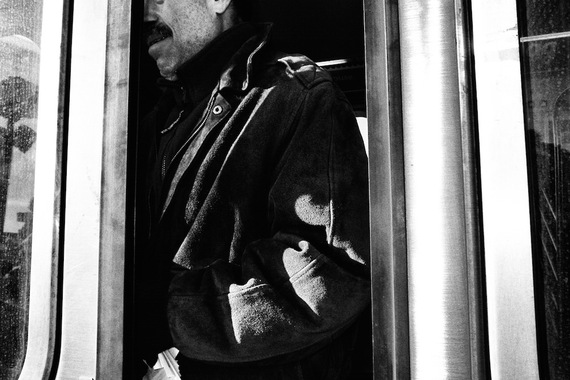 Men in Fedoras - Yes, men wear fedoras - imagine that! Although this could be an element of a great photograph, it should be the impulse behind tripping your shutter. If a great photograph presents itself and there happens to be a fedora in the frame, great. However, if you are chasing fedoras around, you need to change it up. Try looking for cowboy hats!

Anything that is out of focus, blurry, or not correctly exposed - If you do submit any of this you better make sure that it is critical to the vision you are presenting in the image. A photographer that doesn't understand the basic holy trinity of photography - shutter speed, aperture, and ISO, is really over their head when they enter a photo contest. Just saying. Blur can be good - think William Klein, otherwise hold the camera steady, please. 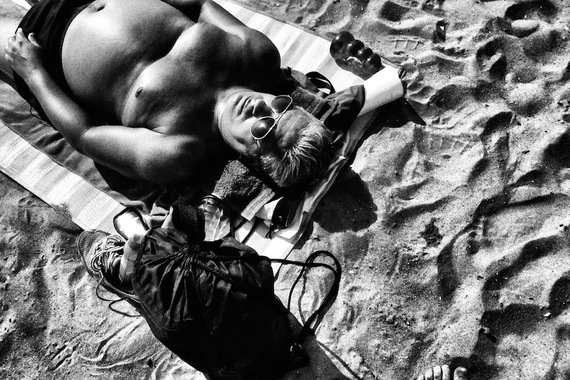 I could go on, but I won't. The real message here, from someone who regularly judges street photography (and looks at a great deal of it for this blog), is that your images need to go beyond the plethora of hackneyed junk that litters most contests and social media in general. You need to work on your vision and pursue images that have something new to contribute to the field of street photography. Add a new point to the conversation, not just a repeat of what was just said. Now, we are all guilty of this sometimes. I too have made nearly all of the above images, some many times over. So it goes. However, I have tried to mature beyond this narrow vision and I certainly don't expect to win any awards with those unimaginative photographs. We need new! Such is life in a visual world, we need to constantly shock the senses and this cannot be accomplished with the same tired images presented again and again. 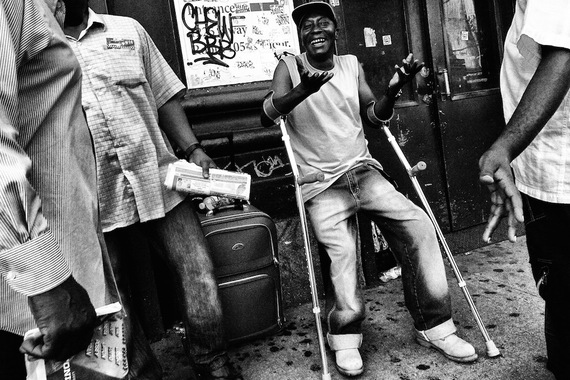 Above all else, when I judge, personally, I want to see personality and vision - I want to see something that I've never seen before or in a way that I've never seen it. It's hard, I know. That's precisely why photography contests should be something more than a chance for you to pay someone to publish your crap and then sell it back to you. If you're winning all the time, you're not doing it right. If you're spending all your money on contests, you're not doing it right. Enter a few of top notch, reputable contests a year with only your very best, and most original, photographs. That's doing it right!

Michael Ernest Sweet is a Canadian-born New York City-based writer and photographer. He is the author of two street photography monographs, The Human Fragment and Michael Sweet's Coney Island, both from Brooklyn Arts Press. Sweet's newest collection, Disposable Camera, is due to release in 2016. More information at his website.