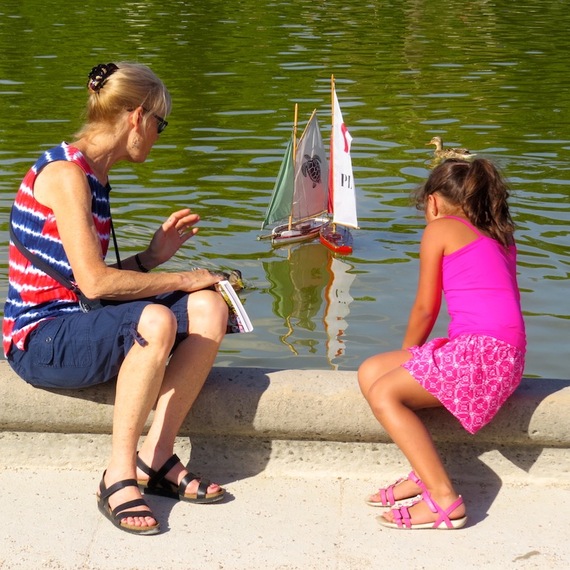 When my wife Kathy and I set out for a week in Paris with our grand-daughter we wanted to do something really special for her. Who would have thought traveling with a 7-year-old would prove so much fun for us, too?

Devon, a true character, charmed Paris. But Kathy, who for decades taught kids in grades K through college, deserves credit for the trip's planning and pace. Here's what she taught me about seeing Paris with kids:

1) Get a good book beforehand and share it with the kids. Our favorite was Family Guide Paris, which was filled with excellent maps, trivia, and information from the best playgrounds to the best places to see puppet shows.

2) Stop at a playground every day. Paris is filled with them. And giving the kids a break between tourist spots does wonders for their disposition. It also gives them "kid time." Devon made friends in three playgrounds, twice with French kids and once with another American tourist.

3) Don't cram too much into each day. It's best to plan one or two destinations but no more. Do sprinkle in a little history. Devon loved "let them eat cake," which the contemptuous French queen Marie-Antoinette is said to have uttered when told her people had no bread and were starving. (Alas there's no evidence she ever said this, but it became the symbol of aristocratic decadence before the French Revolution.)

4) Wherever you stay, establish a routine. Devon loved to take the tiny elevator alone up and down the two flights to our apartment while I tried to beat her on foot. She used the refrigerator to spy on us.

5) Build in a little play time at home or in your hotel. We bought Devon two stuffed dogs, which she named Claudette and Claude. Since Claude, a golden retriever, came with a beret, the dogs always spoke with a French accent when they had a rendevous.

6) Encourage the kids -- and yourself -- to speak some basic French. Devon has a good ear and wasn't shy about greeting everyone with bonjour (hello) or saying merci (thanks), bonne journée (have a good day) or au revoir (goodbye) when we left a place. Please: dump the tired American stereotype that Parisians are unfriendly. They're not. And they absolutely love kids. Devon was given a pen, two lollipops and more than a few smiles.

7) Throw in some destinations just for the kids. Devon loved feeding the ducks and taking a pony ride in the Luxembourg Gardens. Her favorite stop? The city's cramped and cacophonous Musee de la Magie -- the city's magic museum. (Be forewarned: It's only open three afternoons a week).

8) Go high. Everyone loves the views of Paris, not just the kids. The Eiffel Tower, of course, is magical for kids in its own right, but the towers of Notre Dame Cathedral may have an even better view of the city.

9) Make the serious stops fun. The French help a lot. Paris art museums are usually free for children under 10. And most sell books or pamphlets in English that encourage kids to draw some of what they see and turn the museum visit into a treasure hunt of sorts. Kathy added her own questions for Devon. "Why do you think (Edgar) Degas liked ballet dancers and race horses?" she asked. "Is there anything similar about them?" (Hmmm.)

10) Start early. Arriving a half hour before someplace touristy opens can save you an hour or two in line -- as we learned the hard way when we arrived at Notre Dame tower at opening time and waited two hours to begin climbing the nearly 400 steps to the top.

12) Keep meals simple. Devon can be a pretty picky eater. But we learned quickly that she loved baguettes, French ham, gaufres (waffles) and French fries. We threw in some carrots and cucumbers and called it a balanced meal. Carry water as well. Buying water gets pricy and on warm summer days, you'll consume a lot. Every park has a spigot to refill bottles.

So bon voyage. Remember: It's the little moments of travel that are the most memorable. See the trip through your kids' eyes and everyone will have a better time.

40 Prettiest Cities in the World
Voting Made Easy
Register to vote and apply for an absentee ballot today
Register now
More:
travelparisFrance
Newsletter Sign Up
An essential daily guide to achieving the good life
Subscribe to our lifestyle email.
Successfully Subscribed!
Realness delivered to your inbox