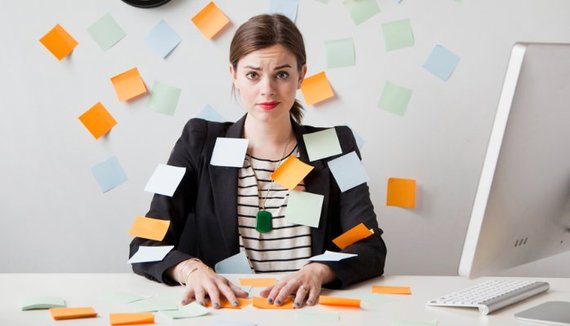 Unfortunately, self-control is a difficult skill to rely on. Self-control is so fleeting for most people that when Martin Seligman and his colleagues at the University of Pennsylvania surveyed two million people and asked them to rank order their strengths in 24 different skills, self-control ended up in the very bottom slot.

And when your self-control leaves something to be desired, so does your productivity.

When it comes to self-control, it is so easy to focus on your failures that your successes tend to pale in comparison. And why shouldn't they? Self-control is an effort that's intended to help achieve a goal. Failing to control yourself is just that -- a failure. If you're trying to avoid digging into that bag of chips after dinner because you want to lose a few pounds and you succeed Monday and Tuesday nights only to succumb to temptation on Wednesday by eating four servings' worth of the empty calories, your failure outweighs your success. You've taken two steps forward and four steps back.

Since self-control is something we could all use a little help with, I went back to the data to uncover the kinds of things that people high in emotional intelligence do to keep themselves productive and in control. They consciously apply these twelve behaviors because they know they work. Some are obvious, others counter-intuitive, but all will help you minimize those pesky failures to boost your productivity.

A vicious cycle of failing to control oneself followed by feeling intense self-hatred and disgust is common in attempts at self-control. These emotions typically lead to over-indulging in the offending behavior. When you slip up, it is critical that you forgive yourself and move on. Don't ignore how the mistake makes you feel; just don't wallow in it. Instead, shift your attention to what you're going to do to improve yourself in the future.

Failure can erode your self-confidence and make it hard to believe you'll achieve a better outcome in the future. Most of the time, failure results from taking risks and trying to achieve something that isn't easy. Emotionally intelligent people know that success lies in their ability to rise in the face of failure, and they can't do this when they're living in the past. Anything worth achieving is going to require you to take some risks, and you can't allow failure to stop you from believing in your ability to succeed. When you live in the past, that is exactly what happens, and your past becomes your present, preventing you from moving forward.

2. They Don't Say Yes Unless They Really Want To

The more difficulty that you have saying no, the more likely you are to experience stress, burnout, and even depression, all of which erode self-control. Saying no is indeed a major self-control challenge for many people. "No" is a powerful word that you should not be afraid to wield. When it's time to say no, emotionally intelligent people avoid phrases like "I don't think I can" or "I'm not certain." Saying no to a new commitment honors your existing commitments and gives you the opportunity to successfully fulfill them. Just remind yourself that saying no is an act of self-control now that will increase your future self-control by preventing the negative effects of over commitment.

Emotionally intelligent people won't set perfection as their target because they know it doesn't exist. Human beings, by our very nature, are fallible. When perfection is your goal, you're always left with a nagging sense of failure that makes you want to give up or reduce your effort. You end up spending your time lamenting what you failed to accomplish and what you should have done differently instead of moving forward excited about what you've achieved and what you will accomplish in the future.

4. They Focus On Solutions

Where you focus your attention determines your emotional state. When you fixate on the problems that you're facing, you create and prolong negative emotions which hinder self-control. When you focus on the actions you'll take to better yourself and your circumstances, you create a sense of personal efficacy that produces positive emotions and improves performance. Emotionally intelligent people won't dwell on problems because they know they're most effective when they focus on solutions.

"What if?" statements throw fuel on the fire of stress and worry, which are detrimental to self-control. Things can go in a million different directions, and the more time you spend worrying about the possibilities, the less time you'll spend taking action and staying productive (staying productive also happens to calm you down and keep you focused). Productive people know that asking "what if? will only take them to a place they don't want -- or need -- to go. Of course, scenario planning is a necessary and effective strategic planning technique. The key distinction here is to recognize the difference between worry and strategic thinking.

Positive thoughts help you exercise self-control by focusing your brain's attention onto the rewards you will receive for your effort. You have to give your wandering brain a little help by consciously selecting something positive to think about. Any positive thought will do to refocus your attention. When things are going well, and your mood is good, self-control is relatively easy. When things are going poorly, and your mind is flooded with negative thoughts, self-control is a challenge. In these moments, think about your day and identify one positive thing that happened, or will happen, no matter how small. If you can't think of something from the current day, reflect on the past and look to the future. The point here is that you must have something positive that you're ready to shift your attention to when your thoughts turn negative, so that you don't lose focus.

File this one in the counter-intuitive category, especially if you're having trouble controlling your eating. Your brain burns heavily into your stores of glucose when attempting to exert self-control. If your blood sugar is low, you are far more likely to succumb to destructive impulses. Sugary foods spike your sugar levels quickly and leave you drained and vulnerable to impulsive behavior shortly thereafter. Eating something that provides a slow burn for your body, such as whole grain rice or meat, will give you a longer window of self-control. So, if you're having trouble keeping yourself out of the company candy bin when you're hungry, make sure you eat something else if you want to have a fighting chance.

I've beaten this one to death over the years and can't say enough about the importance of sleep to increasing your emotional intelligence and maintaining your focus and self-control. When you sleep, your brain literally recharges, shuffling through the day's memories and storing or discarding them (which causes dreams), so that you wake up alert and clear-headed. Your self-control, attention, and memory are all reduced when you don't get enough -- or the right kind -- of sleep. Sleep deprivation raises stress hormone levels on its own, even without a stressor present, which are a major productivity killer. Being busy often makes you feel as if you must sacrifice sleep to stay productive, but sleep deprivation diminishes your productivity so much throughout the day that you're better off sleeping.

When you're tired, your brain's ability to absorb glucose is greatly diminished. This makes it difficult to control the impulses that derail your focus. What's more, without enough sleep you are more likely to crave sugary snacks to compensate for low glucose levels. So, if you're trying to exert self-control over your eating, getting a good night's sleep--every night--is one of the best moves you can make.

Getting your body moving for as little as 10 minutes releases GABA, a neurotransmitter that makes your brain feel soothed and keeps you in control of your impulses. If you're having trouble resisting the impulse to walk over to the office next door to let somebody have it, just keep on walking. You should have the impulse under control by the time you get back.

Meditation actually trains your brain to become a self-control machine. Even simple techniques like mindfulness, which involves taking as little as five minutes a day to focus on nothing more than your breathing and your senses, improves your self-awareness and your brain's ability to resist destructive impulses. Buddhist monks appear calm and in control for a reason. Give it a try.

Desire and distraction have the tendency to ebb and flow like the tide. When the impulse you need to control is strong, waiting out this wave of desire is usually enough to keep yourself in control. When you feel as if you must give in, the rule of thumb here is to wait at least 10 minutes before succumbing to temptation. You'll often find that the great wave of desire is now little more than a ripple that you have the power to step right over.

A big final step in exercising self-control involves stopping negative self-talk in its tracks. The more you ruminate on negative thoughts, the more power you give them. Most of our negative thoughts are just that -- thoughts, not facts. When you find yourself believing the negative and pessimistic things your inner voice says, it's time to stop and write them down. Literally stop what you're doing and write down what you're thinking. Once you've taken a moment to slow down the negative momentum of your thoughts, you will be more rational and clear-headed in evaluating their veracity.

You can bet that your statements aren't true any time you use words like "never," "worst," "ever," etc. If your statements still look like facts once they're on paper, take them to a friend or colleague you trust and see if he or she agrees with you. Then the truth will surely come out. When it feels like something always or never happens, this is just your brain's natural threat tendency inflating the perceived frequency or severity of an event. Identifying and labeling your thoughts as thoughts by separating them from the facts will help you escape the cycle of negativity and move toward a positive new outlook.

Putting These Strategies to Work

The important thing to remember is you have to give these strategies the opportunity to work. This means recognizing the moments where you are struggling with self-control and, rather than giving in to impulse, taking a look at these strategies and giving them a go before you give in.

What tricks do you use to exercise self-control? Please share your thoughts in the comments section below, as I learn just as much from you as you do from me.