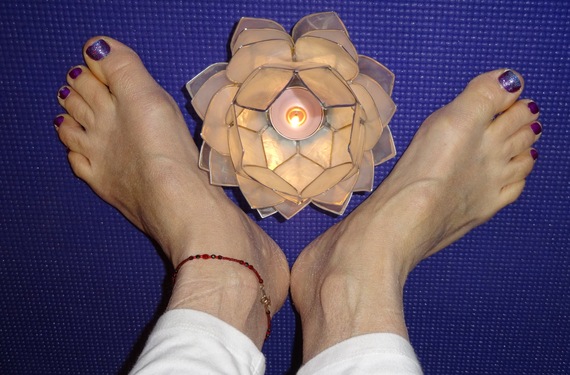 January is a great month for getting into (or back to) a yoga practice. When you step onto your mat you may alter a lot more than your waist circumference... if you're like me (and so many others) you just may find that yoga changes -- or even saves -- your life. Maybe your practice will just give you the courage to try bright purple nail polish (non-toxic of course), or maybe it will give you the strength to take down cancer. In my case, it made all the difference for both. Here are a dozen ways yoga turned my life upside down:

1) Before yoga, I refused to go for a pedicure. Yes, that's right: I had a severe case of pedicure phobia. But yoga changed all that. Hanging out in bare feet for hours (and sometimes being asked to place them on another practitioner for a partner pose) made me give in to fancy feet (though it's certainly not a requirement!).

2) Wardrobe makeover. Yoga completely changed my wardrobe, which previously consisted of blacks, purples, jeans, and more blacks. Today, since I am a Kundalini yoga teacher (a yoga style that prefers its practitioners to show up in white) my wardrobe is mainly white, white, and more white (yes, even after Labor Day). Jeans? I'd rather wear comfy yoga pants or leggings.

3) Confidence. We work a lot on the navel center, the core area or third chakra, which builds our will power, confidence, and resolve. Maybe you think that's a bunch of hocus pocus, but since I've been practicing yoga I've done a lot of things I'd never considered doing before, like teaching a class, for instance, or getting up in front of a room full of people to speak.

4) Optimism. But not Pollyanna optimism -- more like trust. In the past, I walked on the dark side, always expecting the worst. I even thought if I imagined the worst it would not happen. Yoga taught me the opposite -- that trust and visions of success and happiness are much more likely to manifest when one focuses on positive possibilities instead of worst-case scenarios.

5) Non-attachment. At first, I thought this was weird -- why shouldn't I be attached to my children, for instance? (I practiced attachment parenting, after all.) But there was a lot of suffering in my life, and I found it hard to let go. When my kids went off to college (actually, whenever I had to say good-bye) my meltdowns were dramatic. Yoga taught me that letting go is part of life: Without acceptance of this simple fact, we suffer. A lot.

6) Diet revise. I didn't set out to become a vegetarian, but yoga led me there. Ahimsa (non- harming) is part of yoga, and the more I practiced the less I had a hankering for burgers, hot dogs, or even fish! Of course, no judgment (another thing yoga has taught me) toward people who prefer to eat meat.

7) Goodbye margaritas! To relax, breathing techniques and/or mantras work better than booze -- yes, yoga has calmed this party girl down! I used to drink a bit too much wine, but yoga (and having had breast cancer) has changed my attitude toward spirits.

8) And toward spirituality. For a long time, the rules and regulations of religion turned me off. Though it's not a religion, yoga helped me see my way back to God. Not to church, but to the Divine in every moment.

9) Friends, friends, friends. Yoga has introduced me to an entirely new network of friends. I still have most of my old friends (even the ones that dis yoga). But I also spend a good deal of time with folks who love to practice. Yogis are people and they can be nasty (yes there are some mean-girl yoginis!) but the vast majority of practitioners and teachers I've met on the mat have been remarkably kind.

10) The fear factor. I spent my life being afraid of what might happen, but I flew to Asia twice this year after more than 20 years of not boarding an airplane due to my fear of flying. Yoga has given me courage that I didn't even know I had. I certainly don't know how I could have faced breast cancer without it.

11) No more (or hardly any) whining. Yes, I used to be a bit of a complainer. And of course, the more I complained, the more things went sour. Yoga taught me to be grateful for what I have.

12) Last, but not least, yoga has helped me accept myself. There was a nagging voice that used to tell me I wasn't good enough, but that voice has been silenced (or at least severely muffled), and that's a major change.

Yoga isn't just about pretzel shapes and handstands, it's about recognizing and nourishing the light that resides within. But yoga isn't a quick fix; it seeps into your bones, your heart, and your soul over time. With a consistent practice, you just might find that yoga gives you a whole new outlook. Namaste and Happy New Year to all!