"12 Years a Slave" is the most important movie of the year. The film offers a grimace-inducing retelling of the life of an American man who suffered nearly unspeakable horrors despite being born in the "right" part of the land of the free and the home of the brave.

The movie, directed by Steve McQueen and executed fantastically by Chiwetel Ejiofor and Lupita Nyong'o alongside familiar names like Michael Fassbender and Brad Pitt, is based on the memoirs of Solomon Northup (Ejiofor), a free-born black man kidnapped and sold into American slavery in 1841.

I say "American slavery" because "12 Years" is an American story. The movie technically offers testimony on the evils of a bygone era, but it sheds light on impulses and offenses which are a part of our nation's DNA to this day.

We're living in a time where much of the country is seemingly fatigued at the mention of slavery, in a country where adults line up to support a woman who lost her job for demonstrably racist behavior and where grown, educated men feel entitled to use the term "race card" and deride those interested in "ethnic sensitivity" in major publications. We're living in a time where the dominant reaction to America's brutally racist past (toward not just blacks, but all affected minority groups) is more "get over it" than "never forget."

If you doubt that or think that's conjecture, you're probably not paying close enough attention. The America we live in today is one in which southern school boards are trying to gut curricula of references to slavery and judiciaries are upholding laws banning ethnic studies classes because they might "breed racial resentment." At the same time, people are fighting to memorialize the Confederacy and for the right to wave the pro-slavery union's flag. Whose history? Whose America? 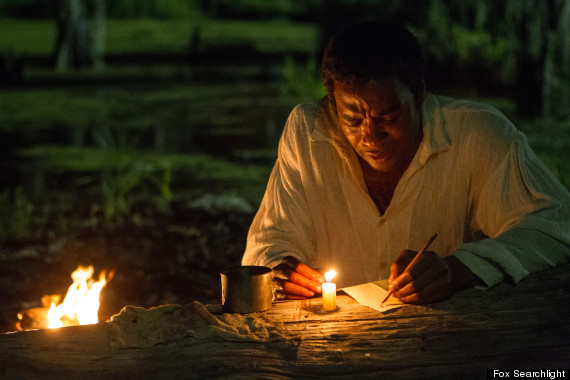 "12 Years" doesn't let you get over "it," because "it" is not just a window in the societal racism and brutality that constituted slavery; it's the story of one human being. The horrors visited upon Ejiofor -- and those which he is horrifically forced to inflict upon others -- are spelled out not only in whips and chains, but on Ejiofor's face. Long, silent close-ups are among the most brutal scenes in this movie, telling the story of a relentless exercise in psychological warfare that Northup also had to overcome. At times, the movie feels like a play, as though the fantastic cinematography and sprawling settings shrink away in the presence of Ejiofor's masterful performance .

It's the type of movie that leaves the audience in a sort of stunned silence as pre-credits facts appear on the screen (no, Northup's tormentors were not brought to justice) and forces the mind and heart to work quickly through a series of emotions. The body's reaction to "12 Years a Slave" is undoubtedly unique to each individual, and while I could write extensively about the combination of anger, shame and despair that coursed through mine as the credits ticked up the screen, I'd rather point you in the direction of better pieces, like Wesley Morris' review on Grantland.

"12 Years" also excels in that it tells the story not only of a black man in America, but of the white people who justified, enforced, resisted or were generally indifferent to slavery. Performances by the likes of Fassbender, Paul Giamatti, Pitt, Sarah Paulson (as the jealous, brutal wife of Fassbender's plantation owner), Benedict Cumberbatch and Paul Dano build out the complex tapestry of white society's role in slavery without once allowing the viewer to feel for a would-be Atticus Finch or whoever that character in "The Help" was. McQueen conducts his characters in such delicate balance that though Northup's eventual return to the north is facilitated by white men, the movie doesn't allow for a White Savior pathos. 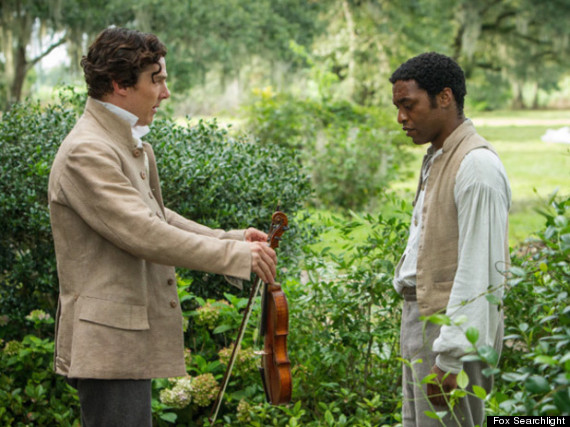 This is not just American history, but recent American history. Northup published his memoirs in 1853 -- 160 years ago. For comparison, the Roman gladiator games were most popular in the first century B.C., and I am willing to bet that my sterling public school education in Orange County, Calif. spent as much if not more time on the brutality that took place in the Coliseum than on that which took place on American soil nearly 2,000 years later. There are people on Facebook who say they're grandchildren of Northup, but in the classrooms of my youth, slavery was something bad that sort of just "happened" -- a curious institution that was afforded importance mostly because of the emphasis put on the heroism of what people like Abraham Lincoln "did" about it. (When I tweeted that the movie should be shown in schools, a colleague who grew up in fine public schools in New Jersey told me she never realized the massive gaps in her knowledge of slavery until until she visited Cape Coast castle in Ghana. This is not an uncommon experience -- ask your friends if they can remember, for example, learning about how slaveowners routinely raped their slaves.)

Nor does this limited definition of America's history and present reality end with high school graduation. "12 Years" is wonderfully subversive on a broader level, just by existing as a movie. I recently wrote about how movies like "12 Years" and other likely Oscar favorites "Fruitvale Station," "Mandela: Long Walk to Freedom" and "Lee Daniels' The Butler" shouldn't be taken as evidence that Hollywood has become more diverse. These are, like almost all roles Hollywood has praised black actors and directors for, black stories. We will have arrived at true diversity when actors like Ejiofor and Michael B. Jordan ("Fruitvale") are cast in and awarded for playing roles that could have been played by whites but weren't simply because Ejiofor and Jordan are better actors than the white actors who were also being considered for those roles. (All of the aforementioned films were also created outside of the studio system.)

But that doesn't mean that movies like "12 Years" shouldn't be richly rewarded and heavily promoted. Go see this movie, take your children if they are old enough (they are), take your parents and tell your friends. McQueen and his stellar company of players have made an uncommon film, and you need to see it at least as much as they deserve your patronage.