I never knew him, but I want to thank him. Exactly 120 years ago today, my then 16-year-old great-grandfather, Peter Smolenyak, arrived in New York on the S.S. Moravia from Hamburg. Ellis Island hadn't opened yet, so he would have taken his first steps on American soil at the Barge Office in Battery Park. By Carpatho-Rusyn standards, he was early. Few of this under-recognized, Slavic ethnicity (our big claim to fame is that Andy Warhol was one of us) were leaving their homes to travel to the New World in 1890, but in the years that followed, many more would cross the pond to supply labor for America's coal mines and steel mills.

Among the others were another 20 Smolenyaks, but I wouldn't discover them until much later. Years of checking phone books in hotels as I traveled had failed to reveal any one else with our distinctive name. Until the Internet changed all that, I was convinced that my great-grandfather was the only Smolenyak to ever immigrate to America.

If I were to tell you Peter's life story, I would sound like so many who glorify their ancestors. How hackneyed would it be for me to say that he was hard-working and salt of the earth? But the thing is that he really was. My other Rusyn great-grandfather was both a bigamist and murderer, and I have no problem sharing that reality. I'm not one to rewrite history when it's convenient, but Peter truly was one of those self-sacrificing immigrants you hear of so often.

After arriving, he swiftly found himself in Wilkes-Barre, Pennsylvania, where he would work in the coal mines until his death at age 65. In 1894, he married Karolina Motyczka, a fellow Rusyn immigrant, just three months after her arrival in America. The couple had their first child in 1895 and another child - with impressive regularity - every two years, until they finally stopped at number 11. In something of a rarity for the times, all of their children would survive until adulthood. 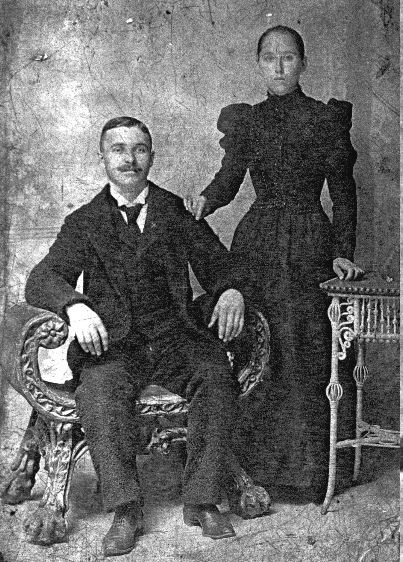 In 1900, the couple bought their first house, and in 1904, they purchased the land beneath it from a coal mining company. In 1910, they bought a second house that they rented out. I still remember during my first genealogical field trip as a young adult being informed, upon asking to look at land records, that "your people" (meaning ones with foreign-sounding, multi-syllabic names) wouldn't have owned property. But "my people" had.

Peter and Karolina had come here for the same reason so many come to America - for a better life for themselves, but even more so, for their children and their children's children. And I'm one of the countless beneficiaries.

As an Army brat, I was born abroad and have since traveled to all the continents and more than 80 countries, something Peter probably never could have imagined. I've even been to his hometown of Osturňa, Slovakia three times. There, I'm treated like family and have had the peculiar experience of meeting descendants of those who came to America, but returned to the old country.

An encounter like that makes you think. I love traversing the globe and exploring new cultures, but I'm always grateful to come home. To me, simply being born an American is tantamount to winning a lottery. And one of the main reasons I'm here and have had so many opportunities is because of the decision made by a teenage boy 120 years ago.

So thank you, Peter, and happy anniversary. I'll try to live up to your name.