We've all met that man. That man. The intimidating one. The gorgeous one. The one, who's so pretty we do that side-eyed staring where we totally aren't actually staring (but yes, we totally are)? And then he opens his mouth and he's a smart ass on top of it? Or surly? Or, maybe even worse, completely silent? We want to punch him for being so beautiful, and then yank him by his collar down onto the closest flat surface.

Writing Beautiful Bastard ($15, Gallery Books) was a wildly fun ride that let us live in the head of a hot bastard for a little while. Writing Bennett Ryan was a little like playing a game together: How far can we push it and still have people love him? (Or at least want to rip his clothes off.) Sometimes we couldn't believe the things he said, the things Chloe said back, and how the two of them turned into this crazy force of nature when they got near each other. Although we always say the bad boys aren't the ones you really want to marry, no matter how snarky Bennett is we can't help but want to take him home with us.

What is it about the beautiful bastards that lure us in anyway? Is it as simple as knowing that smoldering impatience or sharp tongue will translate into something unreal in the bedroom? Or is it the fantasy that a man who holds everyone and everything to his sharp, exacting standards could fall head-over-heels for us?

Whatever the reason, there's no denying that we love ourselves some bastards, and being beautiful doesn't hurt one bit. Thankfully, books and film are full of them. From the quiet surly Victorian era suitors, to the modern quick-witted superheros, we're ready to swoon for the bastardly men. 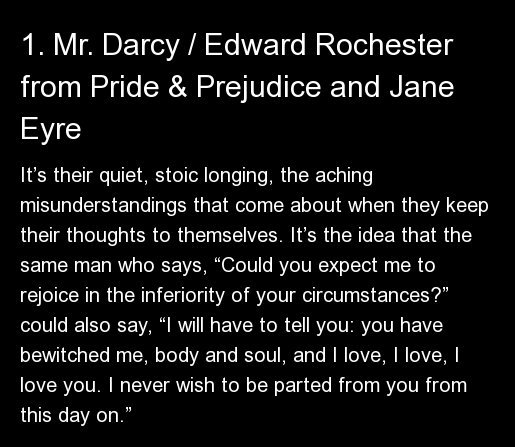 1 / 13
1. Mr. Darcy / Edward Rochester from Pride & Prejudice and Jane Eyre
It’s their quiet, stoic longing, the aching misunderstandings that come about when they keep their thoughts to themselves. It’s the idea that the same man who says, “Could you expect me to rejoice in the inferiority of your circumstances?” could also say, “I will have to tell you: you have bewitched me, body and soul, and I love, I love, I love you. I never wish to be parted from you from this day on.”