Although cemeteries can be places of tranquility for some, for others cemeteries arouse fear and trepidation. Some who have traversed cemeteries tell stories of gripping ghost encounters that could convince even staunch skeptics not to walk the grounds of cemeteries that are supposedly laced with paranormal activity.

Either way, we thought you'd like this list of some of the allegedly spookiest cemeteries our state has to offer.

Unfortunately, decades of ghost stories have encouraged some people to vandalize memorials and other cemetery property. If you do plan to visit any of the cemeteries listed below, please be respectful and make sure you're not trespassing!

In no particular order, here are 13 of the most haunted cemeteries in Illinois, according to hauntedplaces.org.

Showmen's Rest is a section of Woodlawn Cemetery where remains from a 1918 circus-train wreck were buried in a mass grave. Between 60 and 110 employees were killed when another train conductor fell asleep, causing his train to strike the circus train. Many of the victims' names were not known, so some of the markers say things like 'unidentified male' or 'Baldy' or '4 Horse Driver.' Today, the section is still used for burials of circus showmen. The cemetery is rumored to be haunted. Locals say the sound of phantom elephants can be heard at night.

Alton Cemetery is said to be haunted by several ghosts. One is a 9-year-old named Lucy Haskell, seen in the vicinity of the Hayner/Haskell monument. Another is a spectral woman in black near the Grandview mausoleum, and a third is minister and publisher Elijah P. Lovejoy. An abolitionist, Lovejoy was shot at a pro-slavery riot in 1837; his ghost is said to hang out near his monument and occasionally manifest as cold spots. 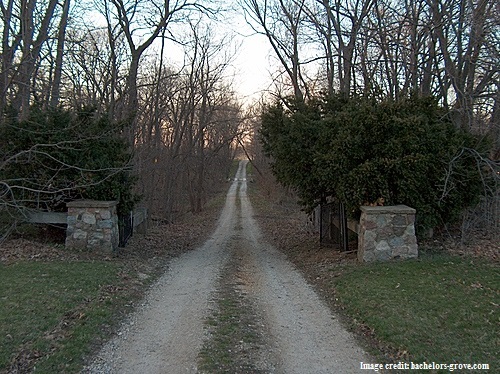 Aux Sable Cemetery is believed to be haunted by the ghost of a mischievous young girl who has been known to play pranks, such as lowering electrical car windows when the key is not even in the ignition. The site is also said to be a portal from a ghostly dimension. 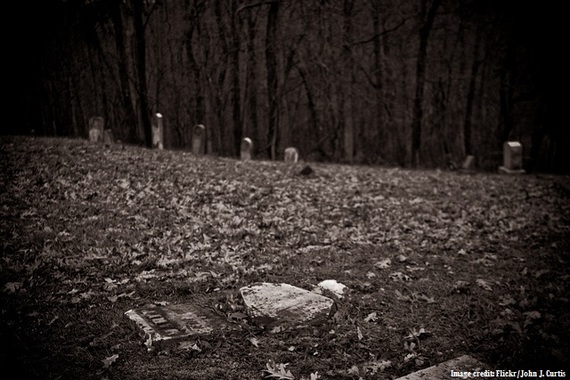 Ridge Cemetery at Williamsburg Hill is said to be visited by apparitions, eerie lights and a disappearing old man. Phantom crowds and horses also have been seen and heard around the area. Rumors of sinister cult activity surround this place as well, and one report tells of a 3-year-old girl who went missing and was found walking halfway to the cemetery. She told her mother that the 'people who live in the ground' wanted her to stay with them. 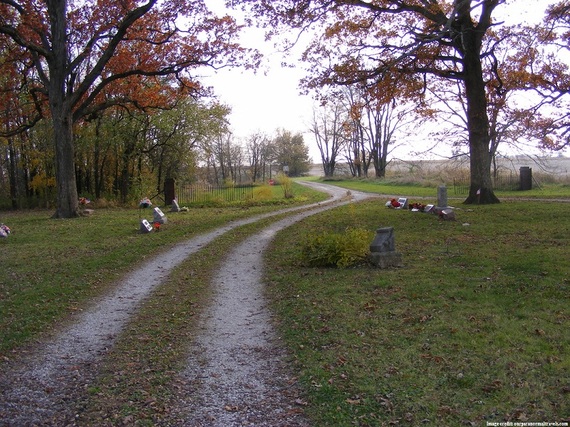 Moon Point Cemetery, aka Moon's Point Cemetery or Moon Creek Cemetery, is older than the Civil War and legendary with those who like to tell ghost stories. It was thought to have begun as a family cemetery for early settlers Jacob Moon and his family. The cemetery's most-talked-about ghost is called the Hatchet Lady, a female apparition of a woman who, as legend has it, often visited the cemetery to watch over her son's grave after he died during the Civil War. When she died, her ghost took up the vigil, carrying a hatchet. She has been heard yelling or whispering earnestly at visitors to 'Get out!' Other reports say a ghost boy and strange dancing lights along with red and white orbs appear here and in the surrounding areas. The sound of sarcophagus lids moving and other strange noises have been reported as well. Because of vandalism, local residents and police take great care to prevent people from trespassing at night when the cemetery is closed to visitors. 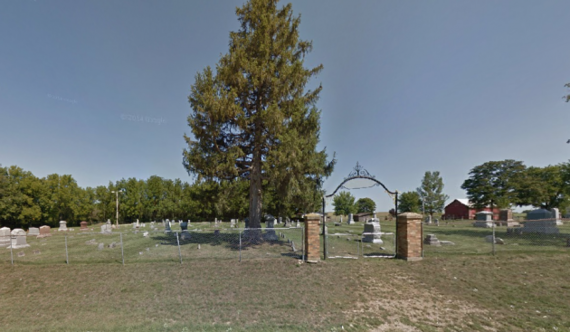 Blood's Point Cemetery, named after the area's first white settler, Arthur Blood, is said to be a hot spot for the eerie, such as orbs, a vanishing barn, phantom vehicles and a ghost dog that sports glowing red eyes. To add to the spookiness, the nearby railroad bridge was said to be the setting for a school bus accident as well as several hangings. Electrical anomalies and ghostly children's laughter have been reported here. 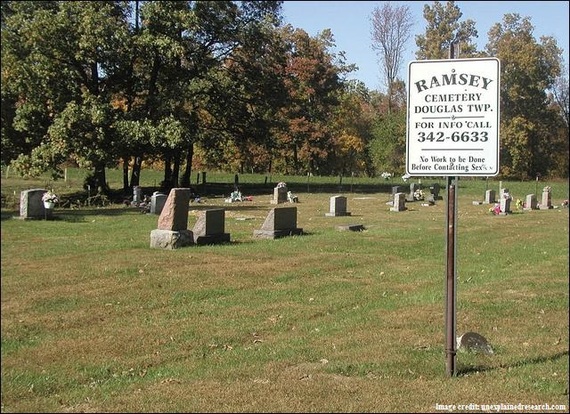 Ramsey Cemetery, established in 1851 with the burial of namesake Alexander Ramsey, is also known as Casbar Cemetery and is a nighttime teen hangout. Besides the graves, rock shelters and sandstone caves are nearby, covered with carvings from its many visitors. A young man committed suicide inside a chapel that stood in the cemetery from the 1920s to the 1960s; the chapel has since been demolished. Among the many legends here is a story of a man in a black cloak with red glowing eyes who is a manifestation resulting from occult activity that took place here in the past. Another legend tells of a werewolf that lives in the caves on the grounds, and yet another says those who put a penny heads up on a tombstone will come back later to find it upside down. 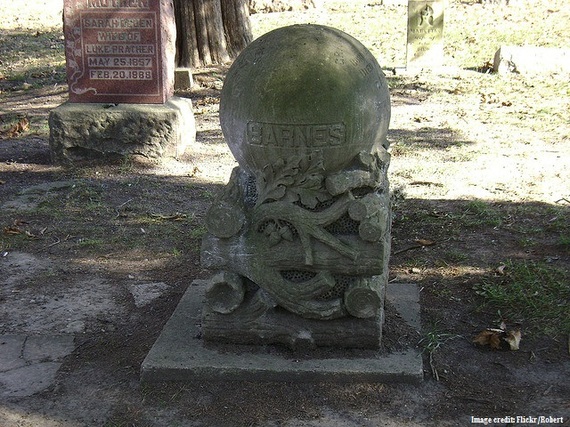 At Saint Omer Cemetery, legend has it that there is a witch's grave. According to the story, Caroline Barnes was hanged by the townspeople for witchcraft. As she went, she cursed the town and vowed to come back for revenge on the anniversary of her death. To trick her, the townsfolk inscribed her gravestone with the death date of Feb. 31, 1882 -- which of course, doesn't exist. Her headstone still stands, and looks like a sphere on a stack of logs. 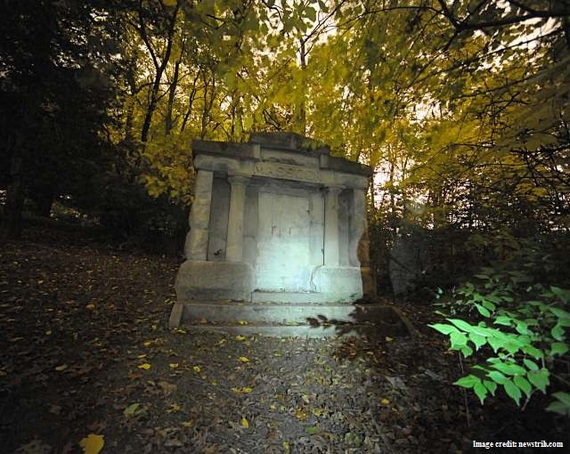 The Massock Mausoleum stands in a small graveyard called the Lithuanian Liberty Cemetery, and it's the stuff of legends. Locals tell of a Hatchet Man, a scary ghost who guards the cemetery, and the mausoleum door is said to remain warm and has been sealed closed since the 1960s when vandals stole a skull from it. In Rosemary Ellen Guiley's 'The Complete Vampire Companion,' she tells about a pale, thin apparition seen here at night. According to the book, after hearing about the sightings, a reporter poured holy water into the mausoleum's vent, and consequently heard an eerie groaning sound come from the crypt. The area is reported to be closely patrolled by police. 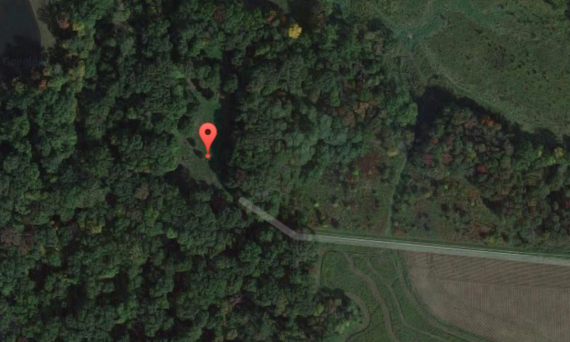 There are vague reports online about orbs and shadow people being seen here. [King Cemetery] is on private property, so be sure to secure the proper permissions before even thinking about visiting. 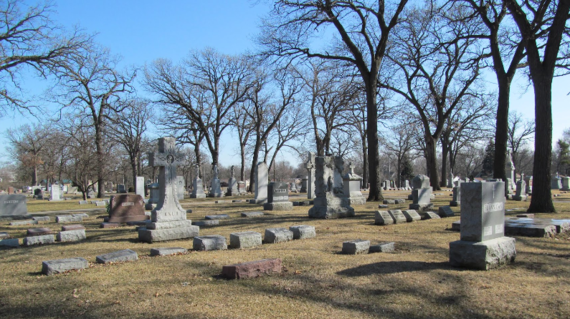 [Mount Olivet Cemetery] dates back to the 1850s, and has a very specific type of haunting. It is said on numerous Internet sites that spectral ghosts wearing 1950s attire are seen throughout the cemetery, only to disappear on second glance. 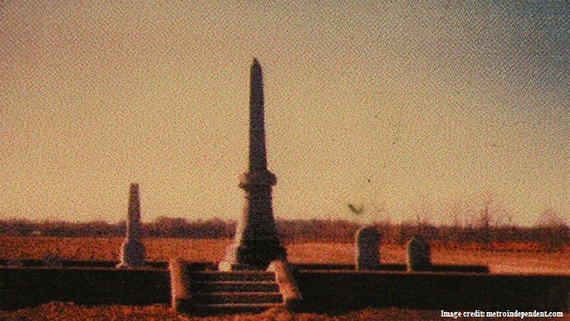 A small family cemetery is now hidden [among] the trees just off Old Keebler Road. It is all that remains of the Krome family mansion, which burned down long ago and was for decades considered to be haunted by the locals. Some enterprising explorers found leg shackles in the concrete walls of the ruined basement, leading to speculation that the house was once used as a holding pen for slaves about to be sold on the open market. Rumors began almost immediately about ghostly apparitions of slaves being seen walking at night from the ruins of the mansion down to the family cemetery. 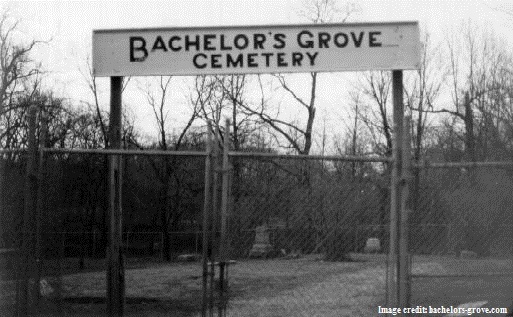 Beginning in the 1970s, visitors here have seen orbs, apparitions, phantom vehicles, and even a floating, shrinking, and vanishing phantom farmhouse. A mysterious black dog and figures in monks' robes also have been seen. Investigations by ghost researchers have turned up ghostly images and electronic voice phenomena. 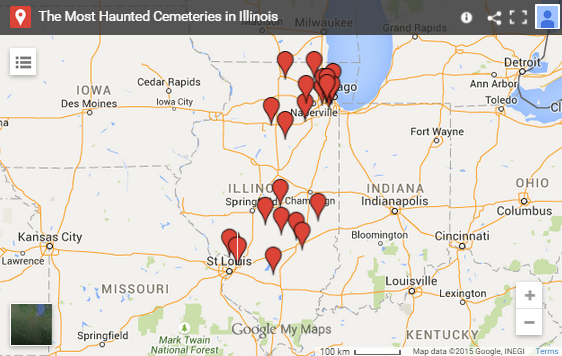 To see where 12 more of the most haunted cemeteries in Illinois are located (including cemeteries in Justice and Barrington), check out Reboot Illinois.

NEXT ARTICLE: Boo! The 50 most haunted places in Illinois