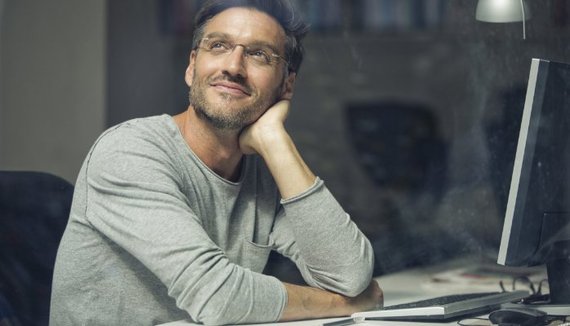 When things aren't going quite the way you'd like them to, it's often the result of not asking yourself the right questions. Some questions are hard to confront because you're afraid you won't get the answer you want, others because you really don't want to know the answer.

But the best things in life don't come easily, and turning away from life's toughest questions is a sure path to mediocrity. I believe that Socrates said it best:
"The unexamined life isn't worth living."

Socrates' observation also applies to business. When Eric Schmidt was CEO of Google, he famously said, "We run this company on questions, not answers."

Life, like business, runs on questions, not answers. Let's take a closer look at some of the tough questions we should be asking ourselves regularly.

1. How do people see me differently than I see myself?

Have you ever heard a recording of your voice and thought, "Is that what I really sound like?" Because of the way the sound of the voice travels through the human skull, we never hear ourselves the same way that everybody else hears us. The same is often true for the way we behave. We interpret our behavior in terms of how we think we come across, whereas everyone else sees the real thing. A 360° assessment is a great way to gain this perspective. It gathers feedback that is constructive, anonymous, and accurate. If you forego the 360 and solicit feedback in person, make certain you ask for feedback that is specific, avoiding broad questions and generalizations. For example, you're more likely to get an honest and accurate answer to, "How well did I handle myself in the meeting when everyone disagreed with me?" than to, "Am I a good boss?" And be careful to show that you're receptive to the feedback. If you flip out or get defensive every time somebody speaks their mind, due to a lack of emotional intelligence, they're going to stop doing it.

2. What/whom did I make better today?

That's another way of saying, "Leave things better than you found them." Ending each day by asking yourself what or whom you made better is a great way to keep yourself grounded and focused on what really matters.

Do you ever get that nagging feeling that something is a little off in your life? This often happens when little behaviors creep up on you that violate your values. If spending quality time with your family is one of your primary values, but you keep staying late at work, there's a conflict. If you want that nagging little voice to go away, you're going to have to do something about it.

4. If I achieved all of my goals, how would I feel? What can I do to feel that way as I work to achieve them?

The ability to delay gratification in pursuit of your goals is one of the most fundamental prerequisites for success, but delaying gratification doesn't have to mean being miserable until you cross that finish line. You can achieve more--and have more fun doing it--if you let yourself feel some of that pride and pleasure along the way.

5. What haven't I taken the time to learn about?

It's a big world out there, and it's getting bigger all the time. Scientists have theorized that it once took 1,500 years for the accumulated knowledge in the world to double; now it only takes a year or two. Don't get caught behind.

6. In what areas of my life am I settling?

When you settle, you accept less than you're capable of. Sometimes we settle in dead-end jobs. Other times we settle for unhealthy relationships. If you don't ask yourself where and why you're settling, it's hard to stop it.

7. What do I want my life to be like in five years?

Lewis Carroll once said, "If you don't know where you're going, any road will take you there." The corollary is that, once you have your destination in mind, you can plan your route. Five years is the perfect timeframe: It's not so far in the future that you can't imagine yourself there, but it's not so close that you can't do anything about it.

From a survival perspective, fear has its purpose. It's what keeps us from sticking our hand in the washing machine or any of the million other things that could get us hurt or killed. But fear has a tendency to get carried away. Instead of keeping you safe, it keeps you from improving your life and living your dreams.

9. Who has qualities that I aspire to develop?

When people have qualities that you admire, it's a great exercise to reflect on these qualities and think about ways that you can incorporate them into your repertoire.

10. What problem are we solving?

Have you ever been in a meeting and suddenly realized that not everyone was having the same conversation? Not because people were talking over each other, but because they had different ideas about the purpose of the discussion. Sometimes it helps to put the topic on the whiteboard when you're having a meeting. This makes certain everyone knows why they're there.

11. What's stopping me from doing the things that I should be doing?

It's easy to shrug your shoulders and say, "I don't know what to do," but that's just an excuse. Most of the time, we know exactly what we should be doing; we just aren't willing to move the obstacles out of the way.

It's an intimidating question to ask, but few people will turn you down. Everyone likes being looked up to, and it feels good to share our knowledge with others.

13. What's the most important lesson I've learned so far in life? Am I living that lesson?

Sometimes life lulls us back into complacency and we're forced to learn a powerful lesson twice. The trouble with this is that it's just as much of a rude awakening the second time around.

Asking the hard questions can be extremely uncomfortable. But we don't learn and grow by sticking with what's comfortable.

What other questions should people be asking? Please share your thoughts in the comments section below, as I learn just as much from you as you do from me.