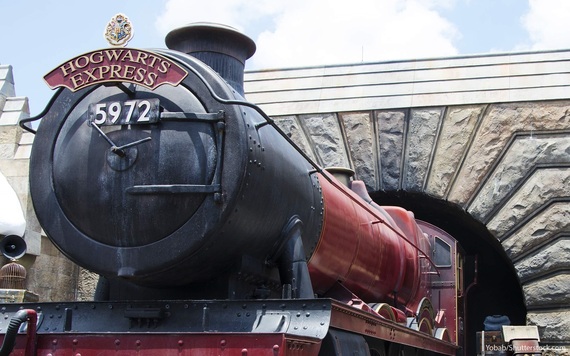 But the fantasy series is also full of money lessons -- even for Muggles. As The Wizarding World of Harry Potter opens at Universal Studios Hollywood on April 7, get a load of these 13 Harry Potter money lessons.

See: Harry Potter Cast Showdown, From Daniel Radcliffe to He Who Must Not Be Named

1. Trust Your Gut and Your Investments

While the British author was broke before "Harry Potter and the Sorcerer's Stone" was picked up, her wealth catapulted following the series' international success. J.K. Rowling's net worth is $1 billion today, according to Celebrity Net Worth, a celebrity finance site, proving that a little persistence and faith can go a long way.

2. Don't Gamble Away Your Wealth

The illustrious businessman lost bets during the Quidditch World Cup and tried to pay off some of his debts with disappearing leprechaun gold. Cornered outside the quidditch stadium by goblins, Ludo attempted to recoup his losses with one last bet on the Triwizard Tournament -- which he lost.

With your everyday Muggle money, keep in mind that any investments that offer big payouts also come with risks. Look to diversify your portfolio so that even if you lose on a bad stock, you don't lose everything like Ludo.

The Malfoy family is known for their power, influence and Galleons. In fact, the family has so much money they don't have to work for a living.

Unfortunately, the Malfoy's appetite for power has led them to use their money and influence for their own gain, leading them down unlawful and unsavory paths. While their reputation helps them get ahead financially, their evilness eventually catches up to them, leading to their downfall.

In "Harry Potter and the Goblet of Fire," spectators at the Quidditch World Cup got excited when gold rained from the sky. Filling their pockets with money, the spectators quickly learned that the free gold was a hoax, proving that if something's too good to be true -- it probably is.

5. Plan for Your Children's Future

James and Lily Potter were murdered by Lord Voldemort when they were just 21 years old. Thanks to their foresight and a bit of family wealth, the two were able to stow away a trove of Knuts, Sickles and Galleons at Gringotts Wizarding Bank for their son.

By leaving money for Harry, the couple ensured the young wizard never had to worry about his finances, despite the other challenges he faced.

Related: What to Do If You Become the Executor of Your Parent's Will

6. Store Your Money in a Safe Place

"Harry Potter and the Sorcerer's Stone" describes Gringotts as "the safest place in the world for something you wanted to hide -- except perhaps Hogwarts."

Owned by goblins, the bank is famous for only having two break-ins since it was established in 1474. The first break-in was an unsuccessful attempt by Quirinus Quirrell. The second break-in was a success and involved Harry Potter as he tracked down a Horcrux to the Lestrange family vault.

For your own money, look to keep it stored at an FDIC-insured bank or NCUA-insured credit union. Each guarantees your money for up to $250,000.

7. Live Within Your Means

While Arthur and Molly Weasley had seven children and were considered poor by wizarding standards, the family eked by with various savings strategies. Molly, for example, passed along hand-me-downs, like Ron's Yule Ball suit.

Whether you're a shopping fanatic or keep your budget on a tight leash, look for new and inventive ways to stay within your means.

8. Don't Do Outrageous Things for Money

The Triwizard Tournament in "Harry Potter and the Goblet of Fire" is described as a tournament with high death tolls. Owed to the dangers of each task, a number of restrictions are set in place, like the Age Line, which restricts underage wizards from entering their names into the goblet.

But Fred and George Weasley attempt to bypass the Age Line, drawn by the chance to win the prize of 1,000 Galleons. When their attempt fails, they are thrust back and instantly grow white beards, showing that no matter the danger, some people will do anything to make a quick buck.

At the Quidditch Cup, Harry buys pairs of Omnioculars for Ron and Hermione at 10 Galleons each. But Ron is uncomfortable with the gift and hastily tries to pay Harry for them with leprechaun gold.

When the gold disappears, Ron becomes upset. Harry is not bothered, however, knowing that sometimes friends can't -- or shouldn't -- always pay you back for kind gestures.

10. Make the Most of Your Time

After Fred and George Weasley pass their Apparition tests in "Harry Potter and the Order of the Phoenix," they take full advantage of the spell to travel small distances faster.

"It would have taken you about thirty seconds longer to walk down the stairs," Ron Weasley says to his brother Fred when he apparates down the stairs.

"Time is Galleons, little brother," replies Fred, mimicking the old adage "Time is money," which refers to the opportunity cost of every decision you make.

11. Capitalize on Demands in the Market

"Harry Potter and the Deathly Hallows" was published in 2007, with the final movie hitting theaters in 2011. When the series came to an end, fans were left wanting more -- and J.K. Rowling capitalized on the opportunity.

Since then, Rowling has made millions off proprietary properties like Pottermore, which earned her $13 million in 2014, according to The Motley Fool. More recently, she's collaborated with British playwright Jack Thorne to create the two-part theater production "Harry Potter and the Cursed Child," which opens in London in July 2016; the script will be made into a book available the same month.

Additionally, the prequel movie "Fantastic Beasts and Where to Find Them" opens November 2016 and is primed to be one of the highest-grossing movies of the year.

12. Find Your Niche and Stick to It

By all accounts, J.K. Rowling's first adult book, "The Casual Vacancy," was a success, selling nearly 125,000 copies in its first two days, according to The Telegraph. But while these sales numbers are high, they don't come close to sales for the Harry Potter series.

"Deathly Hallows" alone sold 8.3 million copies the day it was released. So while you might have many talents to fill many roles, find what you're best at -- and stick to it.

13. Find and Use Your Connections

While the Weasleys didn't have a lot of money, they had a lot of friends that were willing to help out. Harry alone gifts Fred and George Weasley 1,000 Galleons to get their shop Weasleys' Wizard Wheezes started, while Arthur Weasley lands several tickets to the Quidditch World Cup by helping Ludo Bagman get his brother Otto out of a minor predicament.