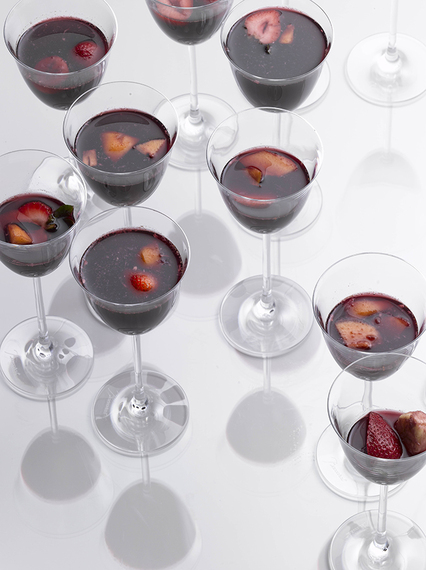 I can't drink. It's not by choice. It's medical. Really. Whenever I've touched the stuff, I break out in hives and my throat starts to close up, which, as it turns out, makes breathing challenging. It's happened after a few sips of wine; another time with champagne; and recently when I had a dessert covered in (uncooked) rum sauce. Every time: hives. Breathing problems.

So I don't drink. Yet I am constantly in situations where drinking is, at minimum, a central activity. Not only am I everyone's favorite designated driver, I am also confronted with incredulity and a lot of stupid assumptions -- nonstop. Here are the things I'm tired of hearing when people find out I don't drink.

1. Are you (insert religion that prohibits the consumption of alcohol)?
No, I am not a Mormon or Muslim or Southern Baptist. I wonder if these same people ask total strangers who don't grab a rack of ribs at the pig roast if they are Jewish?

2. Are you straight edge?
If you ask me this, I already know you grew up in the '90s. Anyway, the answer is no. But while we're on the topic, I'm not punk rock either.

3. What step are you on in the Program?
Honestly, this is the one I get the most. People automatically assume that because I'm not drinking that I have a drinking problem. I am not sure exactly how AA works, but I am pretty sure the people working the steps are avoiding shitty dive bars in Detroit at two in the morning. Just a guess.

4. Seriously, are you really allergic to alcohol?
People are absolutely incredulous when it comes to non-drinkers. Your average person just can't fathom the possibility that someone can't or doesn't want to drink. Don't you think it would be easier for me to tell you that I am a Mormon or that I am working the steps? Tell me, why would I come up with an excuse that requires such an elaborate backstory and more than a few pieces of scientific evidence? SMH. At least one person had enough dignity to preface this question with, "If this is too personal, or you don't want to answer, you don't have to." Oh, gee. Thanks!

5. When did you find out that you were allergic to alcohol?
This one I can actually understand. It's rare enough that anyone would at least be somewhat curious about it. However, telling the same story over and over again can be tedious, especially when you're tailing a bunch of progressively sloppier drinkers, over and over, the same night.

6. Did you find out the hard way?
I am not exactly sure what people mean by this. And, I'm not sure they do either. Every single time that I have been asked this question I put on a grin and exclaim, "Yeah, man!" Despite the lie, the reply seems to satisfy them, because all I ever get in return is, "whoa," or "I bet." The only thing I can figure, is that the drunk brain processes "I am allergic to alcohol" the same way that it processes "Southern Comfort and I are not friends." As if my allergy was a 150 proof battle scar. Weird.

7. Yeah, I'm allergic to alcohol, too. It causes me all sorts of problems!
No you're not, shut up.

9. What do you do when everyone else is drinking?
I dunno, converse with other people? Same as you.

10. How can you even have any fun?
Yes, it is possible to have fun in social situations without alcohol. I don't even know how to answer this one. Sometimes, I just laugh and nod.

11. Dude, how much weed do you smoke?
None. I smoked pot once and cried for three hours. Not really my thing.

12. Coke?
Oh for God's sake, no! Just because I don't drink doesn't mean I smoke weed, snort coke, drop acid, take molly, or shoot smack. Damnit, I am starting to think that I really am straight edge.

13. That must suck.
Not really. I've never known the difference. I haven't even been close to buzzed, so I have nothing to compare sobriety to. All I know is that I save a lot of money and that I am will be willing to sell pieces of my perfectly healthy liver to the highest, drunkest bidder.